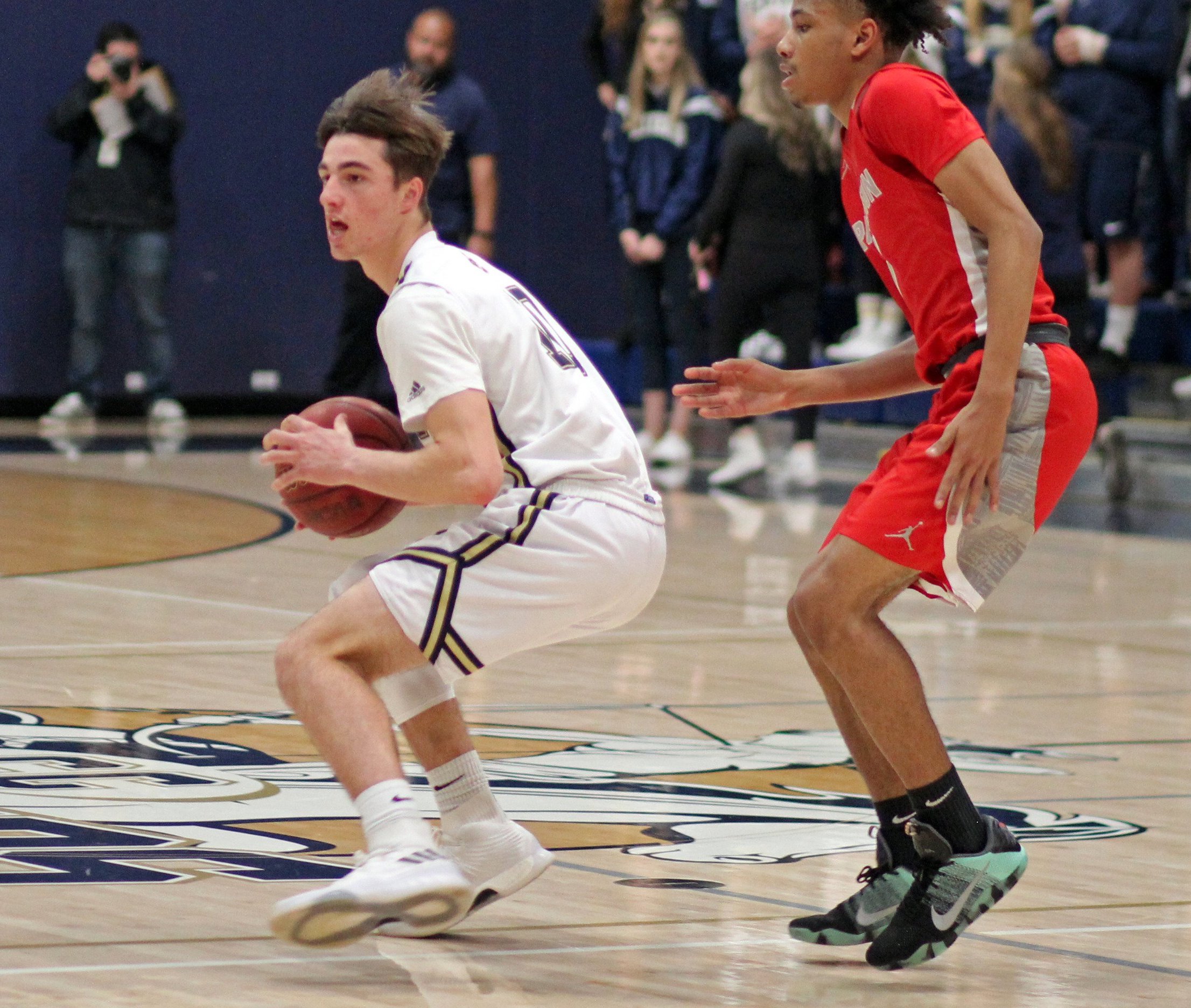 Central Catholic senior guard Justin Traina had 18 points in a 61-56 loss at Weston Ranch on Thursday, Dec. 10, 2019. Traina has scored 18 or more points in four of the last five games. (Samantha Schmidt)

Thursday night in a 61-56 Valley Oak League loss to Weston Ranch, the Raiders may have found one.

Weston Ranch (16-1, 4-0 VOL) is coming off an impressive victory at the Modesto Christian Holiday Hoop Classic, making them immediate favorites to capture the VOL championship for the first time since 2016. But Central Catholic, in trading haymakers with the Cougars, proved it’s not only capable of winning the conference title, but also a fourth consecutive Sac-Joaquin Section championship.

“We’ve really jelled as a team the last four weeks, five weeks,” said Central Catholic coach Mike Wilson, whose team falls to 12-7, 3-1. “They’re confident, they believe in each other and they’re working well together.”

Twice Weston Ranch nearly had the Raiders buried. After falling behind 11-10 after one quarter, the Cougars used an 18-4 run to pull away, and led 32-24 at halftime. Central Catholic fought back to within one, but Weston Ranch once again pulled away and led 48-35 heading into the fourth quarter.

“There was a couple of spurts, where we rushed shots and they were missed and they would run out,” said Wilson. “That was part of our game plan … let’s keep things under control so we don’t allow them to run out. And they got a lot of run-outs in the second half, and that was a big problem.”

Again the Raiders proved resilient, scoring the first seven points of the stanza, getting a pair of buckets from Miles Clayton and a three-pointer from Justin Traina (18 points) to make it 48-42.

Central Catholic would eventually tie the score 56-56 with 56 second to play when Traina stole the ball and raced upcourt for an uncontested layup.

But Weston Ranch scored the final five points of the game from the free throw line to seal the victory.

“Every time we go into a locker room the word ‘compete’ is written up there,” said Wilson. “That’s what I’m most proud about this whole game … they never gave up.”

The teams will meet again Jan. 29 in Modesto.

Traina continued his hot play with his fourth game of 18 or more points in the last five outings, a stretch that included a 30-point outing against Tulare Western and a 26-point effort against East Union. Clayton, meanwhile, led Central Catholic with 21 points against the Cougars, raising his scoring average to a team-leading 14 points per game. Traina is netting 13.4 points per contest.