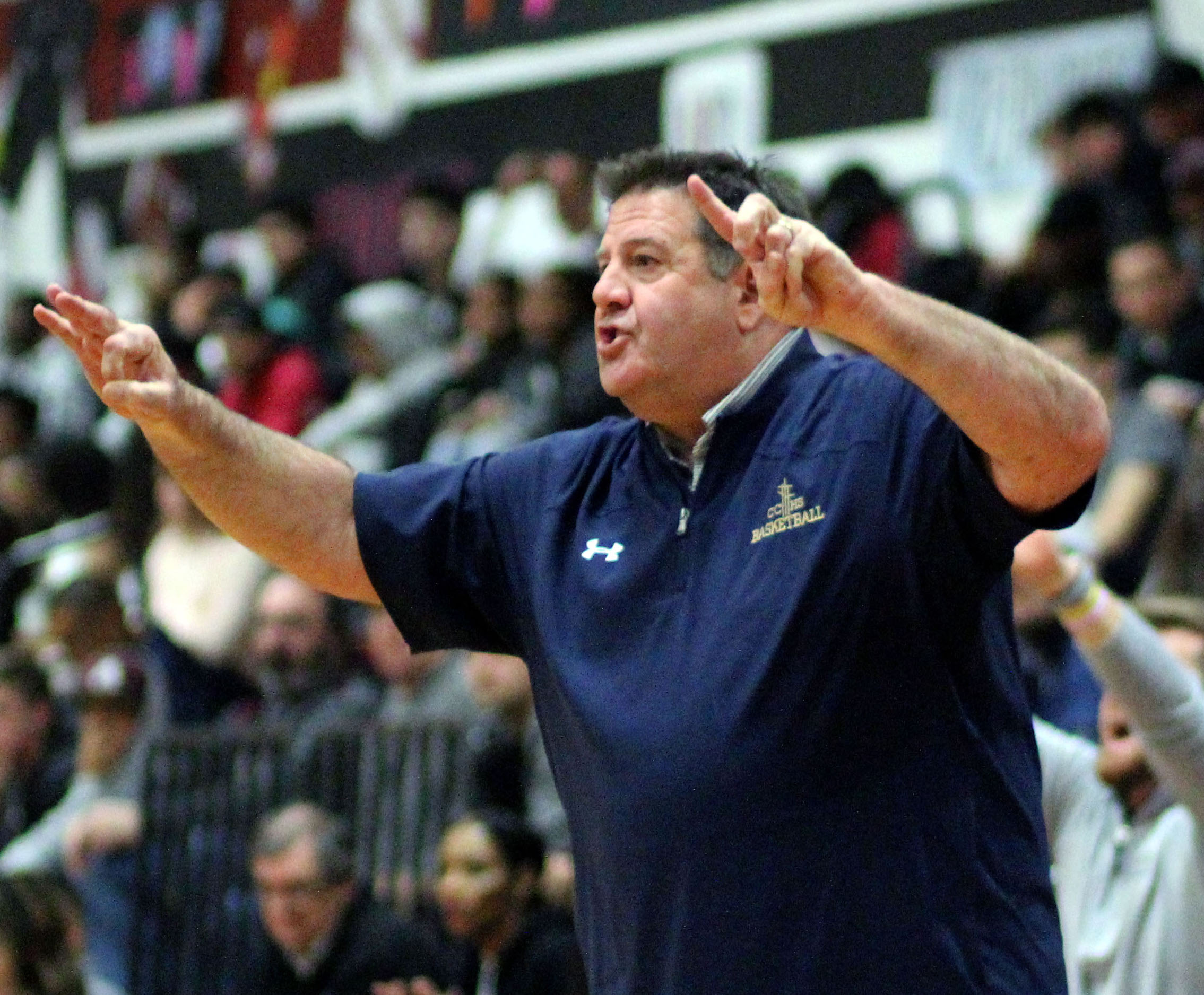 Central Catholic boys basketball coach Mike Wilson has averaged more than 20 wins a season in his tenure with the Raiders. (Samantha Schmidt)

MODESTO — Following Central Catholic boys basketball games, head coach Mike Wilson likes to entertain a coterie — coaches, parents, former players and, yes, even members of the fourth estate — in his office at the Mark Gallo Health and Fitness Center. It’s a cozy little nook, stuffed with memorabilia from the game’s bygone era — an era when coaches ruled with an iron hand and defense won games … and championships.

Following Tuesday’s 48-32 Sac-Joaquin Section Division III semifinal win over Will C. Wood (Vacaville), which sends the Raiders to their fifth consecutive section championship and seventh final in the last nine years, one member of Wilson’s cabal shares a story about chatting with a fan who couldn’t believe that Wilson hasn’t yet suffered a heart attack.

The ursine Wilson, who owns a career record of 332-126 as the Raiders’ coach and won section banners in 2016-18, immediately sees the humor in the anecdote and laughs heartily. He knows full well that his intensity on the sideline often is viewed as a cardiovascular calamity waiting to happen.

Truth be told, if Wilson had to coach any other way, his heart likely wouldn’t be in it. He’s cut from the same cloth as legendary hotheads Bobby Knight, Al McGuire, Don Haskins, Bob Huggins and Rick Majerus. But make no mistake, he has mellowed.

Case in point: Tuesday, against Wood, the Raiders thoroughly dominated the first half. But a quick third-quarter start by the Wildcats and a lapse in concentration on Central’s part gave Wood the ball trailing just 28-22. Wilson called a timeout.

Vesuvius was about to blow.

“I just told them, ‘Hey, we’ve gotten away from what’s been successful for us, let’s get back to it,’” Wilson explained. “And they did.”

What the Raiders did was get back to playing tough defense, specifically a 3-2 zone that limited the effectiveness of 6-foot-7 Nem Drca and 6-6 Landon Seaman. The Wildcats’ offense runs through their big men and neither got comfortable looks at the basket all night.

Coming out of that timeout, Central Catholic responded with a 12-0 run that effectively put the game on ice, earning them the right to play top-seeded Vanden, a team that beat No. 2 Central Catholic 83-67 on Dec. 12 at the Mark Gallo Invitational. But that was before the addition of junior Arvind Sandhu (game-high 17 points), a transfer from Modesto High who had to sit out until Jan 2., and before big men Nic Sani (6-6, 250) and Dalton Durossette (6-3, 225) had been fully assimilated into the rotation following football season.

For Durossette, Friday’s final is especially meaningful. The senior, who transferred to Central during his sophomore season, played in and lost three section finals — football, basketball and baseball — during his junior campaign.

“I’d like to get one really bad,” said Durossette, who has committed to play baseball at Santa Clara next season. “This would cap off my basketball career fo the rest of my life, since I won’t be playing anymore after high school.”

(all games at Golden 1 Center in Sacramento)