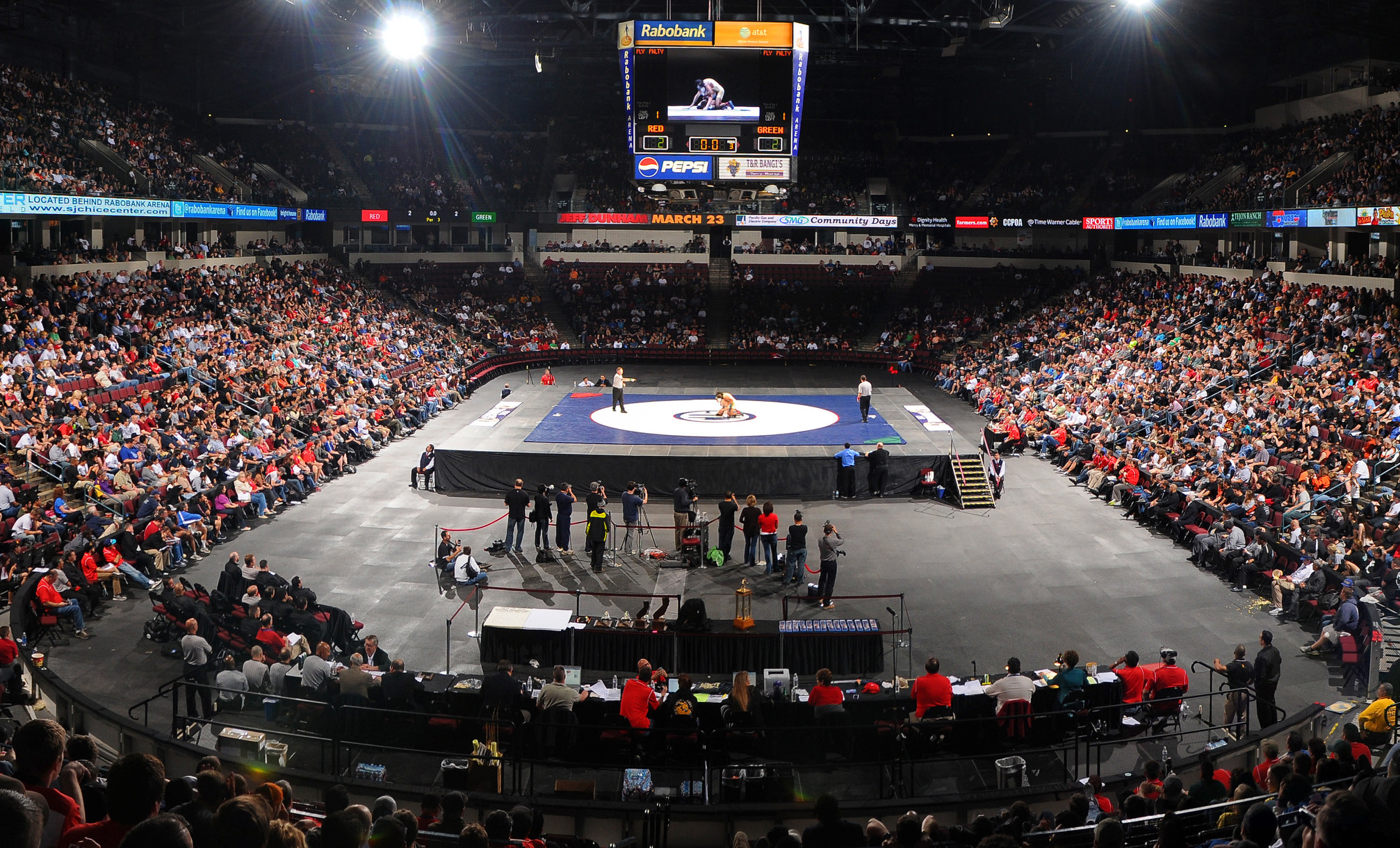 There will be no raised stage this year at the CIF State Wrestling Championships. The boys and girls title matches will be held, class by class, on side-by-side mats. (Michael Duffy/MaxPreps)

The high school wrestling season climaxes the next two weekends with a bona fide change-of-pace, like a batter expecting a 98-mph fastball and instead getting a knuckle-curve.

The Sac-Joaquin Section Championships will step to the plate at a new venue on Friday and Saturday, followed by the first merging of the boys and the girls at the CIF State Championships on Feb. 21-23 at Bakersfield.

For creatures of habit, this is a face-slap. For those looking ahead, it’s the beginning of a potentially exciting new era. For the batter at the plate, well, he hopes he just makes contact.

That’s where the wrestling community sits as it approaches the season-ending meets with more than a little anxiety.

Let’s start with Section Masters, held the last 10 years at Stockton Arena. Section officials were notified late last summer that the venue was not available this weekend, a late change to say the least.

San Joaquin Delta College eventually agreed to be the host. It’s not an ideal venue – it will roll out six mats at Blanchard Gym with two more at an adjacent room – compared to the eight mats across the arena’s large floor.

Awkward setup aside, Delta deserves credit for coming to the section’s rescue.  It cost the section about $30,000 for the arena each year, compared to roughly about a third of that price for Delta. That said, Section Masters never has been a moneymaker.

Will DeBoard, section assistant commissioner, said the Delta meet will be reviewed before plans are made for next year. Thankfully, one thing won’t change: The drama connected to wrestlers vying for section titles and qualifying berths for State (the top six in each weight class).

They’ll advance to Bakersfield’s Rabobank Arena, the comfortable venue for the State Championships since 2004.  It will expand to a three-day event this year, however, thanks to the girls joining in a separate competition with the boys.

It’s believed to be the nation’s first coed state tournament. Organization committees weighed everything, including the fact that the contract for the girls meet in Visalia expired after last year.

There is one unassailable truth here: Girls wrestling has been a boon to the sport. Its growth has shocked many old-school observers. About 2,000 girls wrestled in California a decade ago, when the CIF first sanctioned a girls state meet. That number has tripled. It’s another example of Title IX forever changing the sports landscape, and for the better.

Most coaches disagree with holding the boys and girls state meet under the same roof.  At one level, their concern is understood.

Rabobank’s raised stage, erected in about two hours for the 14 straight title matches each year, was a striking spectacle. The arena lights dimmed, and 28 survivors of a long season engaged for the highest stakes.  The state finals always were much-watch stuff going back to the years they were held at the University of the Pacific. But at Rabobank, it evolved to almost theater and arguably the most distinctive competition on the CIF calendar.

Sadly, there will be no raised stage this year.  The boys and girls title matches will be held, class by class, on side-by-side mats.Some spotlights at Rabobank will be redirected for this purpose, but it will lack the juice of that singular stage.

“I’m not a fan of the boys and girls together for state. I think it hurts both," said Golden Valley’s Chopper Mello, one of the area’s most respected coaches.  “It’s not about whether girls wrestling is not a good thing. To highlight both properly, you have to separate them.”

The first boys-girls merger surely will be a shakedown cruise.  For starters, asking the wrestlers to weigh in for three straight days won’t be easy. Under this year’s format, the winners of the first three rounds on Thursday will be asked to wrestle only once on Friday.

Adjustments no doubt will be made next year, the last at Rabobank under the current contract. What’s ahead is anyone’s guess.

“The raised platform will go away regardless,” CIF wrestling spokesman Brian Seymour said. “The three-hour downtime to put it up is too long after a three-day meet. People want to go home by Saturday night.”

I hope the CIF reconsiders the platform, which made the event unique.

“Not everyone was in favor of the stage when we started. A lot of coaches hoped we just finished the competition Saturday afternoon,” said Alan Paradise, the meet director since its first year at Rabobank. “We’re going to learn some things this year, and we’ll do some new things next year. We’re going to see how it goes.”

The upcoming events at Stockton and Bakersfield will provide the result. Home run or a foul ball?