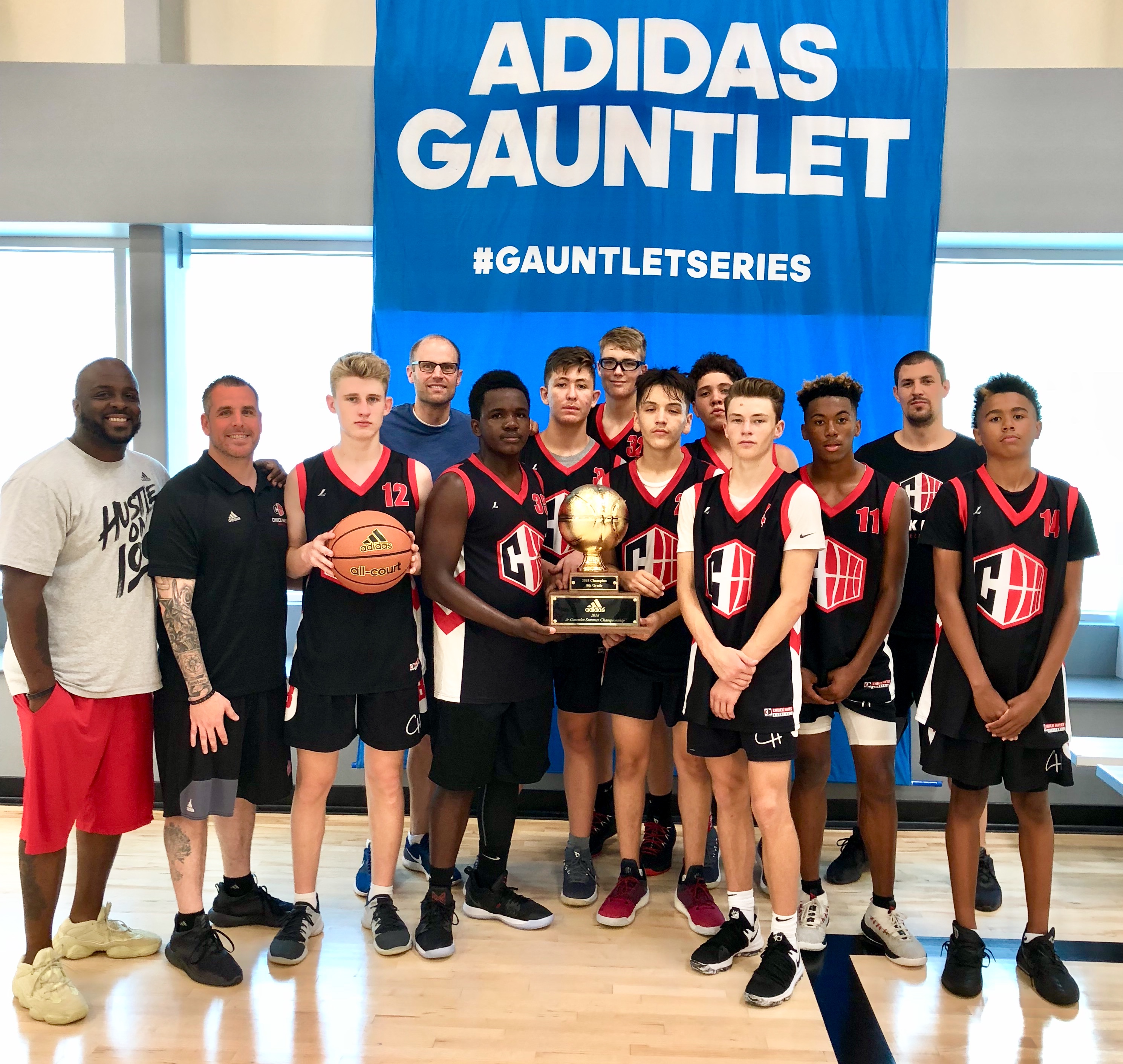 The future is bright for the Modesto Christian High boys basketball program, and some of the other private schools in the Central Valley.

With 10 future Crusaders on the 12-man roster, the Chuck Hayes Basketball 14-and-under boys basketball team stunned a nationally-ranked field at the Adidas Junior Gauntlet Summer Championship, one of the premier end-of-season tournaments on the AAU circuit.

“Winning the Adidas Gauntlet was a huge accomplishment,” CHB director Greg Rosenbaum said. “This is a tournament where you can’t hide from anyone. If you want to be crowned the champion you are going to have to beat nationally-ranked teams and players. The tournament features Adidas’ signature Gauntlet programs from across the country. … By winning the championship, it puts CHB in the spotlight and will give the program an advantage as the boys look to secure a full circuit deal on the Adidas Gauntlet 15u level next season.”

CHB got off to a strong start, sweeping through pool play and then beating Team Apex of Texas and Team BBC of Baltimore, Maryland, to reach the final four.

In the semifinal, CHB’s Alex Argandar, a fast-rising point guard and incoming freshman at Modesto Christian, locked down the New York Jayhawks’ Max Ragusa, a two-star prospect with at least one Division I scholarship offer, for the second time in tournament play. Ragusa has been offered by Coppin State.

Argandar averaged nine assists per game during the Gauntlet, but it was his defense, especially in the semifinal, that gave CHB a chance at the milestone.

“He is the definition of a floor general,” Rosenbaum said of Argandar, who has been mentored by Modesto Christian junior point guard Michael Pearson Jr. “He made sure players were in the right spots. He single-handedly sliced up opposing teams presses, scored when we needed him to and did a lot of things that don’t show up in the box scores.

“No disrespect to the young man,” Rosenbaum said of Ragusa, “but you would have thought Alex was the one with college offers already. It wasn’t just what Alex did on offense. He guarded Max a lot and he neutralized him for the most part.”

CHB is comprised of 12 players from the Central Valley, 10 of which have committed to Modesto Christian as freshmen. Along with Argandar, the CHB 14-and-under roster is comprised of: Kobe Nunes, Bronson Burrow, Austin Moore, Trey Moreland, Devin Day, Isaiah Whyte, Everett Hunter, Oziyah Sellers and Jewlz Kuper, all of whom will attend Modesto Christian in the fall as freshmen. Arman Grewal will enroll at Central Catholic, and Jaydn Marshall is headed to St. Mary’s.

Rosenbaum knew this collection of local talent could make national news after a 39-point drubbing of Team BBC in the quarterfinal. He could see it in their eyes — they believed.

“I knew were on the verge of accomplishing something special,” he said. “It’s one thing as the director and the coaching staff to believe we could win the whole thing, but you could tell at this point that the kids really knew they belonged.”

Day and Nunes had the hottest hands. Day averaged 34 points per game with two 40-point efforts, while Nunes averaged more than 20 points. Marshall, one of the nation’s top sprinters for his age group, emerged as the team’s defensive stopper, while the 6-foot-6 Burrows clashed with Exum Elite’s twin towers in the final.

Day’s confidence — and range — has grown throughout the summer. He’s been a regular contributor with the 16-and-under team, which features Modesto Christian three-year starter Michael Pearson Jr.

“Devin playing up, I believe, gave him all the confidence he needed to have to have the type of tournament he ended up having,” Rosenbaum said. “When you have success against older and stronger players, it confirms that the hard work he’s putting in is paying off.”

The 14s head to Las Vegas July 26-29, where they’ll play in the Big Foot Classic. The field will have representation from every shoe circuit in the country, including Adidas, Nike and Under Armour.