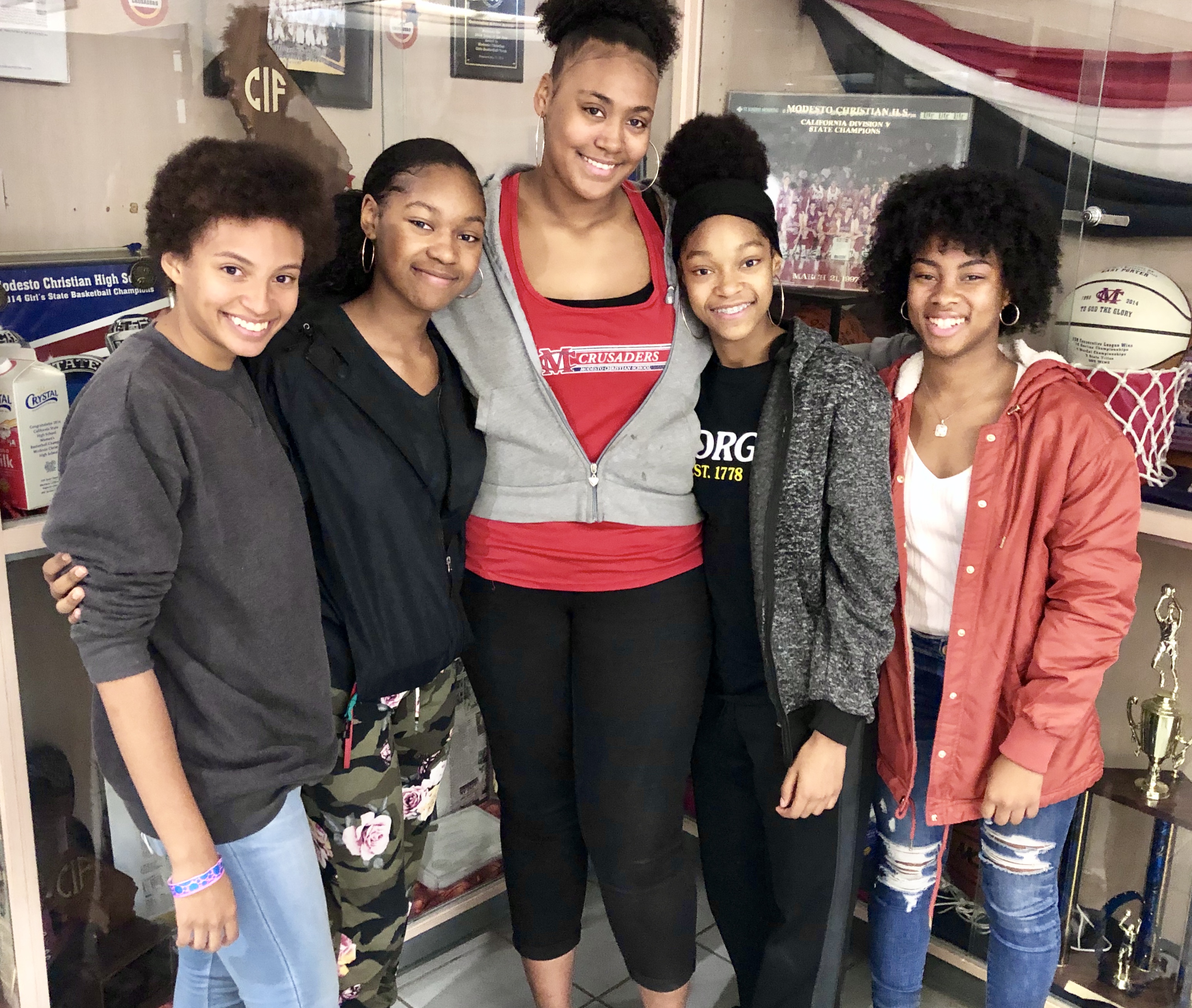 After tearing her ACL and missing the second half of last season, Modesto Christian's 6-foot-4 center D'aja Bryant (center) made her season debut in a 42-40 loss to Lincoln on Thursday, Jan. 3, 2019.

Cleared for take off: Crusaders bolstered by Bryant’s return and transfer guards.

The Crusaders have lost eight of their first 11 games, including the Tri-City Athletic League opener at Lincoln of Stockton on Thursday evening. The Trojans edged the Crusaders, 42-40, despite 13 points from transfer guard Nia Boston in her debut and nine from 6-foot-4 center D’aja Bryant in her first game since rupturing her ACL.

“I’ve seen all the pieces, and I believe I have all the pieces to the puzzle. It’s just about putting the puzzle together now. Going in I didn’t think it was going to be as tough. A couple of the games we gave away, but that’s all part of the process.”

The purpose of that process is to return the Crusaders back to the mountaintop. Modesto Christian has won seven Sac-Joaquin Section championships, tied for fifth-most in section history with Bradshaw Christian. The Crusaders trail only St. Mary’s (19), Ripon Christian (12), Bear River (10), Colfax (10) and St. Francis (8).

But it’s been nearly four years since Modesto Christian’s last championship — a runaway victory over Kimball in the Division II final.

With one of the most dynamic players in the southern half of the section in Bryant and a fleet of guards, including seniors Allison Tillsbury and Nia Smiley, Spencer likes the makeup of his roster. It has the potential to make noise in the TCAL and a deep postseason run … if they can coalesce.

The roster is laced with youth: two freshmen, Cora Grover, who had nine points in the loss to Lincoln, and Kiara White; and six sophomores, Hannah Parsons, Juliana Tolbert, Kimora Smith, Victoria Bell, Suzzy McDonald, and Jamila Bynum. The junior class is championed by a pair of transfers: Boston, a point guard who played at Weston Ranch, and Julissa Casillas, a transfer from Lathrop.

Dominique White is also a junior.

Spencer praised the leadership displayed by Tillsbury, Smiley and Parsons as Boston, Casillas and Bryant waited to be cleared. They filled leadership roles for a team challenged annually by its schedule and standards.

“Those three have stepped up," he said. "They’re talking and doing everything they can to keep the ship going. They don’t want to go through what they did last year.”

The Crusaders were 17-12 in 2017, but finished the year with costly losses in their final two games. Modesto Christian was beaten twice in Modesto Metro Conference play by Beyer, including a 55-33 loss in their regular season finale.

One week later, the Crusaders were bounced from the section playoffs with a first round loss to Bear Creek.

Spencer said that team never overcame the loss of Bryant, who was averaging 25 points and 14 rebounds before her season-ending knee injury. Nevertheless, he was proud of their resolve.

“How do you lose that?” Spencer asked. “My team played great last year. The wheels fell off for a little bit but they finished it out. No one thought when we lost D’aja we’d still be co-champs. I was proud of that group.”

Now, with all the pieces in place, Spencer likes his team’s chances at coming through the TCAL poised for another section run. They might suffer a few more setbacks, he says, but that’s all part of the process as Boston, Casillas and Bryant sync with the others. “It’s all in play,” he said, “if we can come together.”