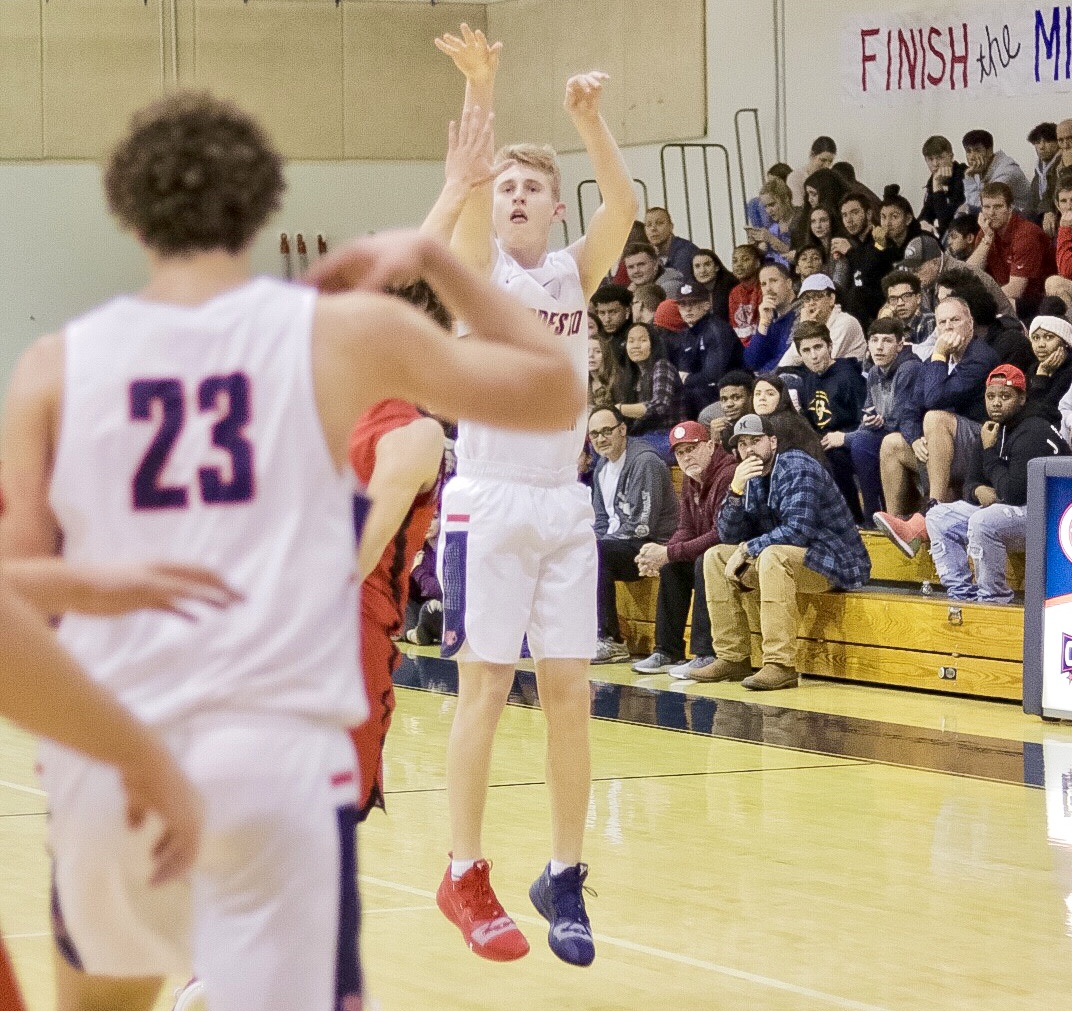 Modesto Christian freshman Devin Day scored nine of his 12 points in the fourth quarter, but it was his defense that triggered the Crusaders' 71-52 win over Manteca on Dec. 27, 2018. (Chris Zweigle)

With the game hanging in the balance and his team out of sorts, Modesto Christian boys basketball coach Brice Fantazia turned to a freshman to seal a victory.

Or is it “steal” a victory?

Sharpshooter Devin Day triggered a decisive run with his defense and then punctuated a 71-52 win over Manteca in the quarterfinal round of the Holiday Hoop Classic with a 3-pointer from the wing.

Day finished with 12 points, but it was his steal of Manteca’s Jorge Cedano with about five minutes left that proved to be the game’s biggest play. Day stripped Cedano and sprung Earv Knoxx (12 points) on a fastbreak to make it 51-43.

Modesto Christian, erratic in the offensive end for most of the night, never looked back. The Crusaders outscored the Buffaloes 26-11 over the final eight minutes, clinching a date in Friday’s semifinal against the winner of Campolindo-Foothill (Bakersfield).

“It was a really close game and I just felt like I needed to help the team get a good lead,” said Day, the team's leading scorer.

Manteca falls out of the running for the Classic crown, but it nearly delivered Thursday's second upset. Hours after Vanden pulled away from Clovis West in the final seconds, the Buffaloes thrilled a capacity crowd with its guts ... and transfer Domonick Victor.

The high-flying guard had three putback dunks, each angrier and louder than the last, and a chase-down block of Dathan Satchell (12 points). He finished with a game-high 18 points, one night after blitzing Centennial for 30, but managed just one field goal in the fourth quarter.

Victor didn’t get much help. Cedano was limited to just seven points. Miguel Segueira chipped in nine, including a 3-pointer to pull Manteca within four, 45-41.

The game remained tense until Day checked in midway though the fourth quarter. Day followed Knoxx’s layup with a baseline drive, and then Michael Pearson’s step-back 3-pointer pushed the lead to 54-43. Day scored nine of his 12 points in the fourth, but it wasn’t his offense that turned the tide for the Crusaders.

“The difference was defense and hustle,” he said. “We kind of came out lackadaisical and in the second half we picked it up. We got us a good lead.”