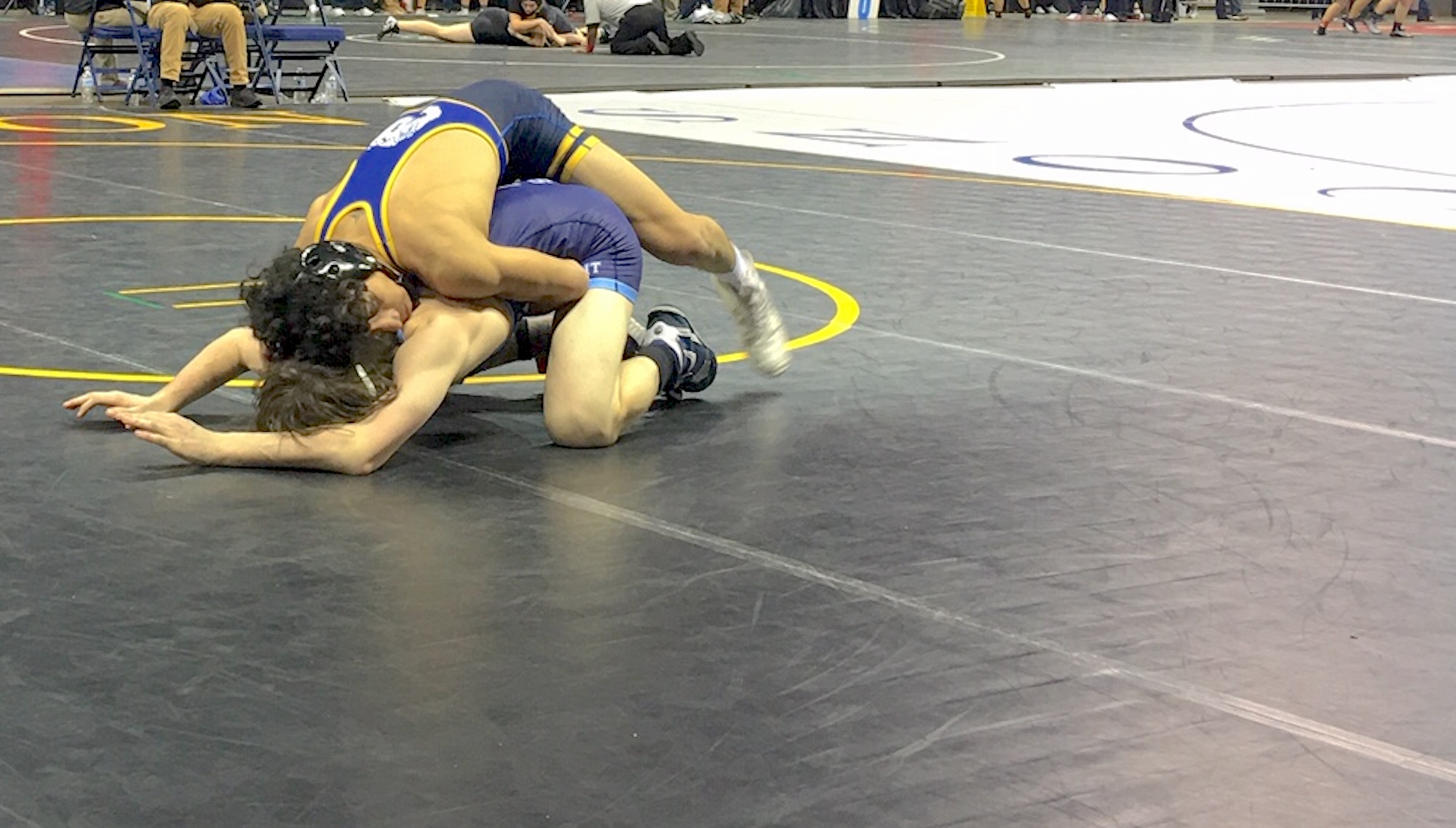 Turlock senior Adrian Heras (on top) is seconds away from pinning Oakmont’s Ben Murphy at the Sac-Joaquin Section Masters Championships on Friday.

Day 1 at Masters Wrestling: Heras and others clinch berths to state meet

STOCKTON – A shock of dark hair piles in waves atop the head of Turlock High senior Adrian Heras. His headgear accents the rooster-like look, and -- sure enough -- he was awake before dawn like everyone else at the Sac-Joaquin SectionMasters Wrestling Championships.

“I’m hungry,” Heras summarized at the end of a long Friday’s work.

Heras is hungry for a state title, and he clinched his trip to the CIF State Championships next week with an overpowering first day at Masters. The Bulldog star, ranked sixth in the state and tops in the section at 132, positioned himself for a second straight Masters title by going 3-0.

Two decisions were capped by an impressive pin win over Ben Murphy of Oakmont in 1:22. Heras is one injury-default shy of being unbeaten this season.

“My goal is to place (at state), but to go above and beyond, is to get that state title,” said Heras, who’s motivated by a painful loss in the so-called medal-or-go-home “blood round” at Bakersfield last year.

Heras has reached the semifinals, which seals the state qualification. Meanwhile, the girls -- making their debut alongside the boys at Stockton Arena -– needed to win their first two matches to punch the same ticket.

“It is very important to me, to show how dominant I am,” said Heras, who won individual titles this season at the Tim Brown in Sacramento and the CIT at Morro Bay, among others.

Heras was one of many to showcase their talent over nine hours of competition. The arena floor was covered by 10 mats, two more than previous years, to accompany the expanded field.

In all, 16 girls and 20 boys from the area will advance to the semis Sunday morning.

Action resumes Saturday at 9 a.m. The boys and girls first-place, third-place and fifth-place matches are scheduled to begin at 3 p.m.