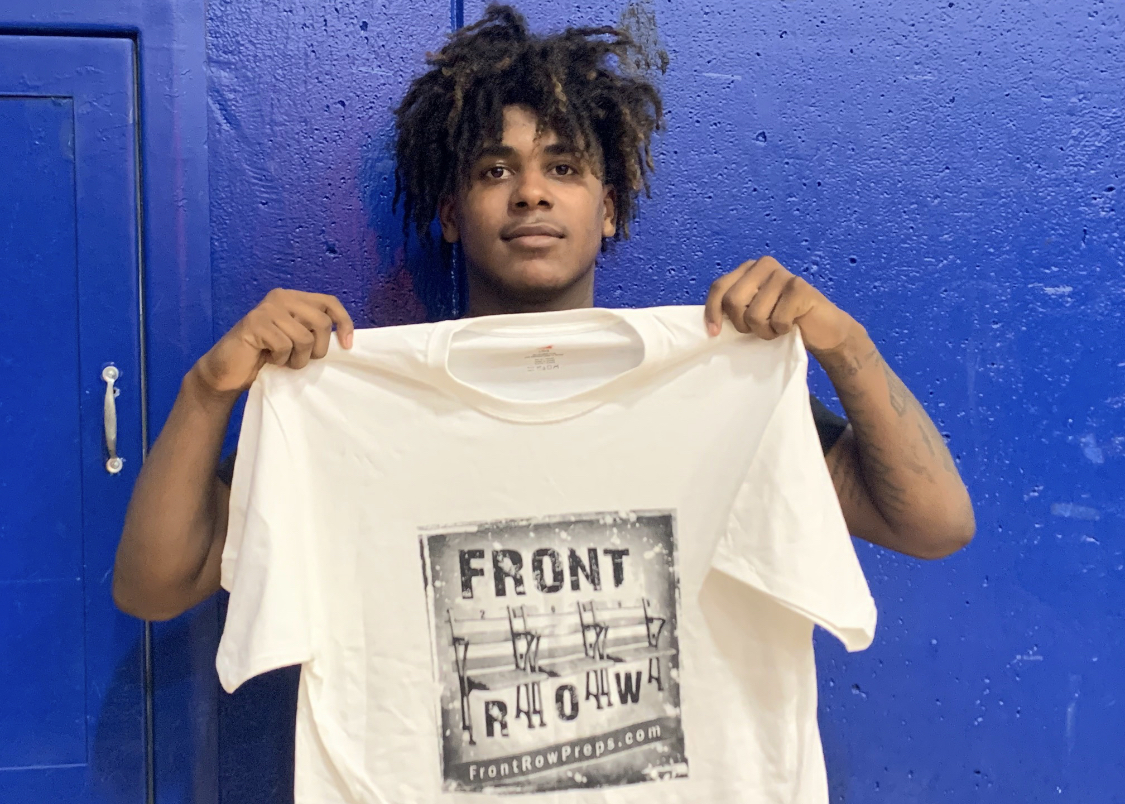 Downey junior Jahmaree Gonder holds up the shirt awarded to him for being named the FrontRowPreps.com Player of the Game. Gonder scored the game-winning basket with less than a minute left in a road win at Turlock.

Downey does it: Knights become CCAL contenders with thrilling win at Turlock

“They had a smaller defender on me, so I took ‘em to the rack and finished on the big man (Turlock’s 6-foot-3 Michael Heidelbach)," said Gonder, a lefty, who totaled 13 points.

A driving basket with 33 seconds to go by Turlock’s Jed Ladine was waved off by a charging foul. Then, after Downey missed at the free throw line, Heidelbach’s 3-pointer with about 3 seconds left clanked off the rim.

Downey (13-7, 2-1), an obscure pack-runner for the best part of a decade, celebrated at Bulldog Arena. Mitchell Evans, Downey Class of 2013, likes his team’s direction as he completes his first full season as coach.

“It’s a big win,” Evans said. “Now we can control our destiny and decide how it goes.”

Early signs indicate a topsy-turvy CCAL race, currently led by Pitman (3-0) after its win over Enochs. Turlock (12-6, 2-1), which won its first eight games, enjoyed a height advantage against Downey. The strength and muscle, however, belonged to the Knights.

They cashed in with 18 of 24 free throws, compared to Turlock’s 3 of 6. The Bulldogs also were bothered at times by a pesky full-court zone press, which forced the tempo in Downey’s favor.

“I was really proud of our on-ball pressure,” Evans said. “That was the key, to get up and pressure and make the game fast. We wanted to speed them up.”

Turlock, despite its 11 triples – four of them by guard Daniel Malagon (15 points) – struggled to find the basket inside six feet. Coach Nick Nathanson prepared the Bulldogs for the press, but at some point, the ball must be scored. Heidelbach led the Bulldogs with 17 points.

“It all comes together when the shots are going in. We didn’t make enough,” Nathanson said. “Our body language seemed to indicate that we would win tonight…We definitely did not expect this.”

Downey greeted its host with runs featuring Lloyd French (19 points) and Gonder. French’s third 3-pointer ended the first period and the Knights grew their lead to 28-17 before Turlock rallied to within 28-26 at the break.

Heidelbach and Malagon found the range after halftime. The Bulldogs jumped ahead early in the final quarter and appeared to stabilize at 58-54 after Ladine’s 3-pointer.

Back came the Knights on a matching trey by guard Elijah Stine (11 points) to set up the emotional finish.

Both teams already anticipate a heated rematch, no doubt stocked with CCAL and playoff implications, on Downey’s senior night Feb. 11.