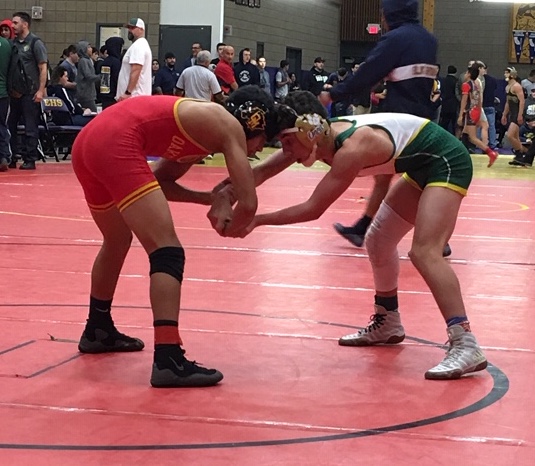 'I have to train harder.' Oakdale wrestler dominates field at Engel, but wants more

ESCALON — Oakdale High freshman Michael Torres, bright-eyed and locked into his task, rolled through the 109-pound bracket at the two-day Engel Invitational.

He dominated the 109-pound class and went 5-0, via four pins and the other a tech, and closed with an impressive victory by fall over Sonora’s Adrian Gonzales. Torres improved to 20-3, all while charting the progress of Oakdale senior Ricky Torres, Michael’s brother, at the prestigious Doc Buchanan Invitational at Clovis.

Ricky, a three-time state qualifier and two-time medalist, went 2-2 while measuring himself against some of the best wrestlers in the country. Someday, Michael wants his shot at the cowboy hat, the signature trophy that goes to the weight-class champions at the Doc B.

“I have to train harder and do extra,” said Michael Torres, who has wrestled since he was 4. “I have to stay competitive and stay ready.”

The Engel, which drew athletes from 29 Sac-Joaquin Section schools, packed the bleachers at Escalon High on Saturday. While harsh wind and rain chilled the landscape outside, the Cougars’ gym was warmed by intense matchups on the mat.

Brad Fuller of Calaveras defeated Mark LaBass of Hilmar in the 195 finals. Football star Justin Rentfro of Hilmar parlayed his strength and power into a win over Sergio Bravo of Central Catholic in the 220 title
match.

Big Valley Christian senior Josh Grabowski, injured during football season, made his wrestling debut at Escalon and reached the finals at 145.

“We’re trying to give the small schools a chance for some good experience before the (section) Masters,” Escalon coach and meet director Derek Scott said in reference to the Engel, a fixture on the
area’s mid-season calendar for over three decades. “The only way you learn is to have some success.”

Oakdale, ranked ninth in the state, hoped for better results at the Doc B, arguably the nation’s best in-season meet. Nine of the top 21 teams in Flo Wrestling’s national rankings were represented at
Clovis High.

The Mustangs’ Brayden Abell (106) and Henry Porter (126) settled for fifth-place medals. Both were beaten by eventual Doc B champions, Abell by Richard Figueroa of Selma and Porter by Mosha Schwartz
of Ponderosa of Colorado. Oakdale sent seven wrestlers to Clovis.

“This (Doc B) has gone from a good tournament to a national event over the last five years,” Oakdale coach Steve Strange said. “We were a little disappointed and had a rough time. The competition is very tough.”

There is no easy way to a medal at the Doc B. Pitman junior Izzy Tubera picked up a sixth at 120 though he lost to eventual champion Nic Bouzakis of Lake Highland of Florida. Also placing sixth were Patterson’s Noah Mirelez of Patterson (132) and Juan Mora of Pitman (220). Mirelez was a semifinalist. Mora also advanced to the semifinals, thanks to an upset 3-2 win over Justin Darter of Bakersfield.

Ron Agostini was recognized for regional and national awards as a sports writer and columnist for 40 years for The Modesto Bee. He retired in 2017.