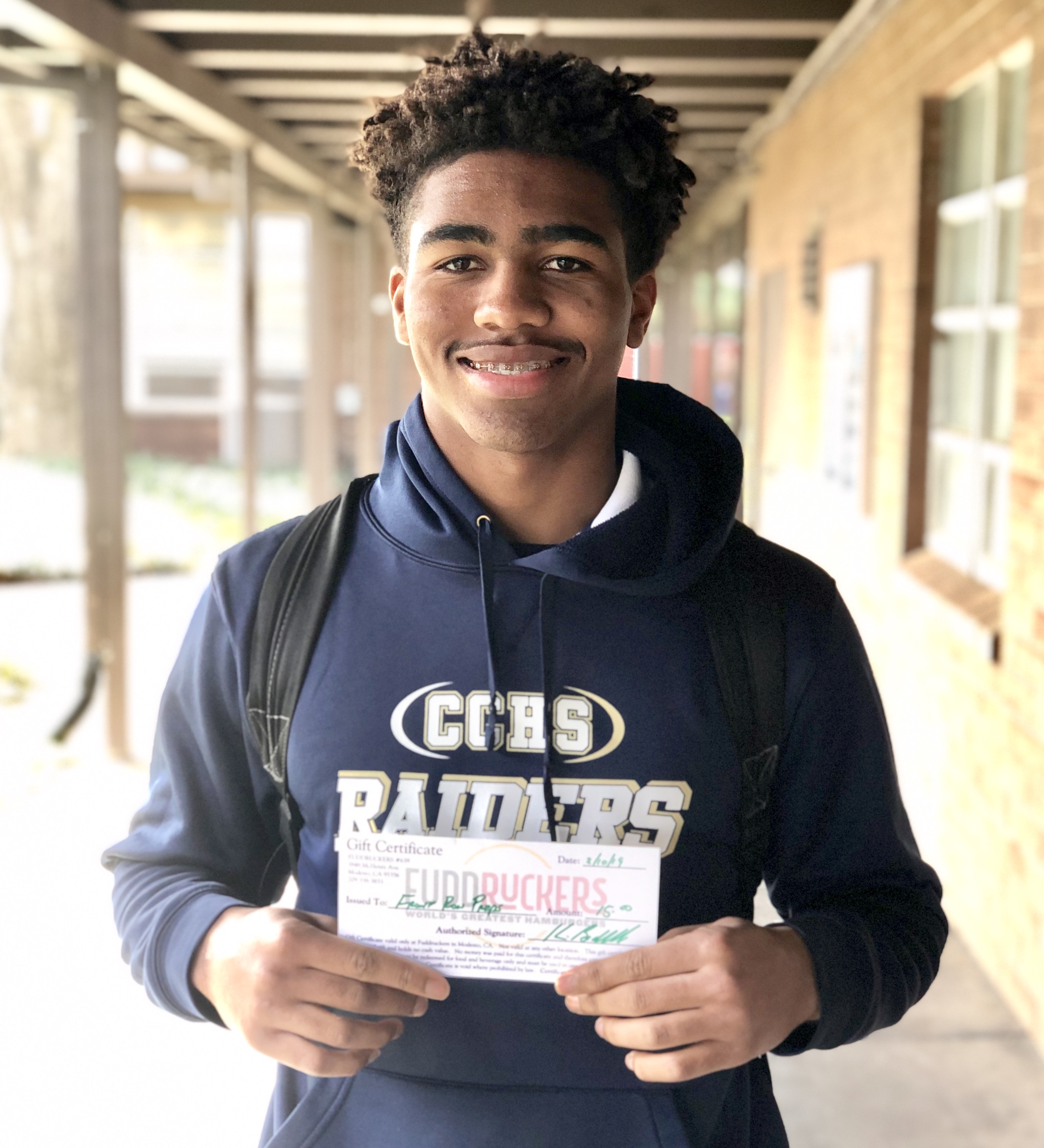 Central Catholic's D'Angelo Bellamy was named the Fuddruckers Player of the Game after racking up 10 points and 10 rebounds in a 55-38 victory at Will C. Wood on Wednesday, Feb. 20, 2019.

A physical tone gave the Central Catholic High boys basketball team a mental edge in Wednesday’s 55-38 victory at Will C. Wood in Vacaville.

"I try to bring football into basketball," Bellamy said. "Playing physical and hard, but smart at the same time. When I bring high intensity, we play all play good together."

No. 3 Central Catholic returns to the Division III final on Saturday afternoon at the Golden 1 Center in Sacramento, where it will face Valley Oak League champion Weston Ranch, the tournament’s top seed, at 4 o’clock.

The Raiders are the defending section champion, but they will be cast as underdogs against the high-flying Cougars (30-1). Weston Ranch has won 29 consecutive games and has aspirations of playing in the CIF State’s Northern California Open Division.

To accomplish that feat, though, they’ll have to unseat the Raiders (23-8), a three-time defending section champion. Central Catholic won Division IV title in 2016 and 2017 before topping Beyer in the D-III final last year.

“No doubt, they’re such a very, very good team on a historical run,” Central Catholic coach Mike Wilson said. “It’s kind of a double-edged sword with the setting (NBA court) and the talent Weston Ranch has. It’s a double worry. We just have to remember, ‘You can’t just be happy to be there, you’re there for a reason.’”

Wilson believes Bellamy has been the difference-maker in the Raiders’ season. A two-way talent for the school’s football team, Bellamy needed time to round into basketball shape. As his conditioning improved, so did Central Catholic.

The Raiders have won six straight and 11 of their last 12.

Bellamy, an all-VOL and All-Region middle linebacker, sets a physical tone, crashing the glass and complimenting guards Dayton Magana (three assists, three steals) and Justin Traina (seven rebounds, three blocked shots), both of whom had 14 points in the win over Wood.

“He’s very active around the basket,” Wilson said. “He got four offensive rebounds and stuffed three of those in the basket. He was active on the boards and physical with them (Wood). When you get extra opportunities, it helps.”

Wilson says Bellamy is a quiet leader who grabs his teammates’ attention with his work rate and tremendous physical skills. To outsiders, Wilson says, Bellamy is a role player; a member of the supporting cast. Inside the locker room, though, he’s an unopposed leader.

“We were soft for good part of the season. When he got in shape after football that’s when we shifted gears.”

Central Catholic took control of its semifinal at Wood with an 18-7 sprint in the first quarter and then closed with an 18-9 charge in the fourth.

Bellamy had a tag-team partner on the low block in Myles Clayton, who finished with nine points, eight rebounds and five blocks.

Central Catholic is making its sixth appearance in a section final, and though it has lifted three straight blue banners, Wilson says his program hasn’t faced an opponent this deep and daunting.

Weston Ranch was the top-ranked large-school team in the FrontRowPreps.com final regular season poll and is No. 15 in the state, according to Cal-Hi Sports.

The Cougars attack with a bevy of guards, led by do-it-all junior Gavin Wilburn, a player of the year candidate, and Donjae’ Lindsey.

Central Catholic is 0-2 against Weston Ranch this season.  The Raiders lost 61-56 on Jan. 10, despite having the game tied at 56-all with under a minute to go. In the rematch at the Mark Gallo Health and Fitness Center, Weston Ranch routed its host, 61-39.

Wilson said his team will need to meet Weston Ranch’s physical demands — and Bellamy could be key again.

“That was the different between the first and second time we played them. You can’t take time off. You can’t let up. You can’t do anything in negative in that sense because they’ll pound you into the ground,” Wilson said. “We allowed that to happen the second time.”