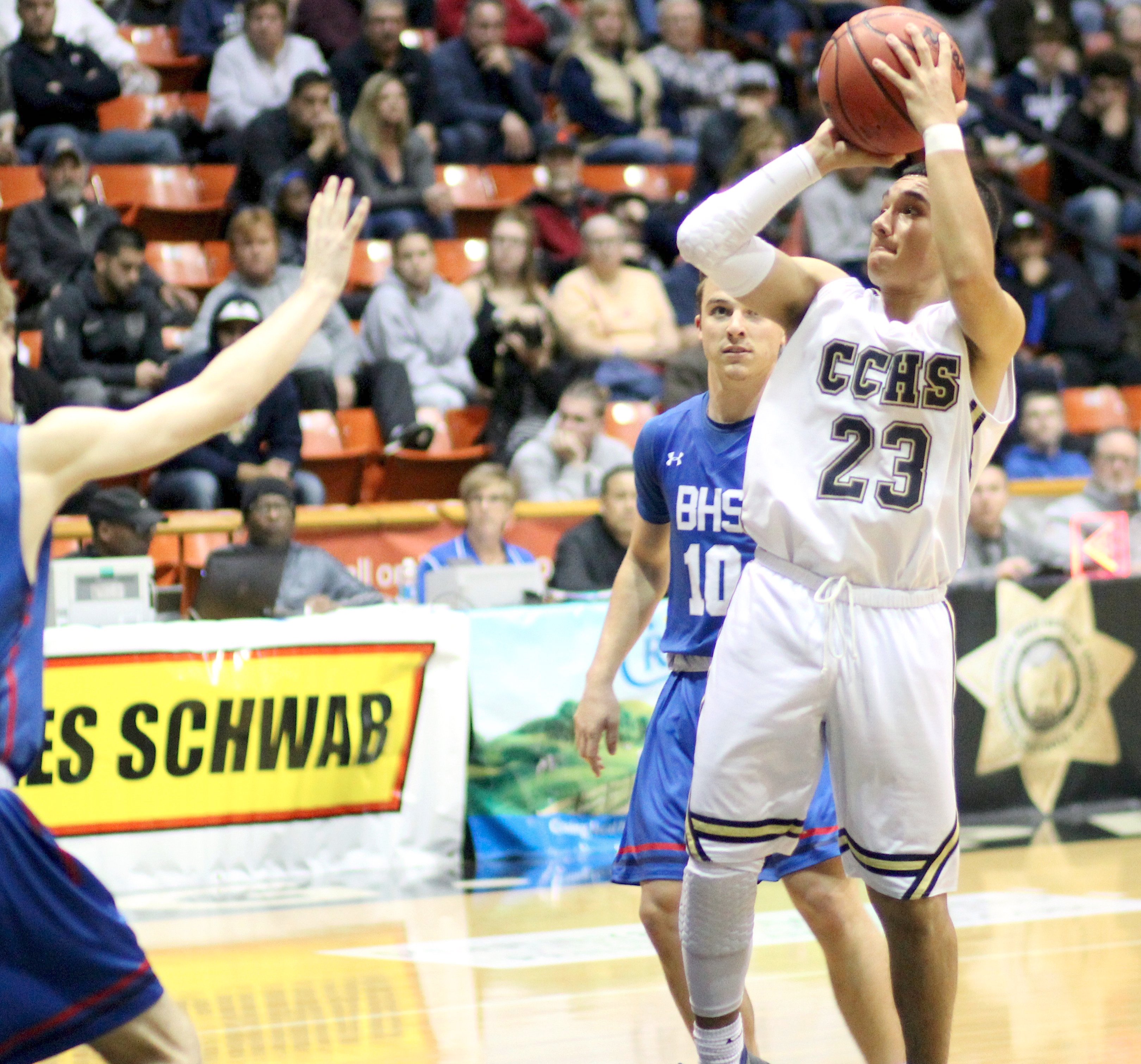 Central Catholic point guard Dayton Magana rises up for a shot during a victory over Beyer in the Sac-Joaquin Section Division III championship game at the University of Pacific on March 3, 2018. (Samantha Schmidt)

From section banners to autographs, Central's Wilson is quite the collector

Through the years, Central Catholic boys basketball coach Mike Wilson has learned to enjoy the moments. All of them, whether old or new, borrowed or bought.

His office, tight-quartered and cluttered, has become a sanctuary for these moments. As he reclines in his desk chair, folding his hands across his lap, he’s nearly enveloped by all of this really cool stuff.

The banners from the Raiders’ three consecutive Sac-Joaquin Section championships are preserved in frames. There is a game-worn uniform, goggles and a leather ball from a dusty era, and a signed poster of former Golden State great Rick Barry. And then, of course, there are trophies and nets and photos memorializing the teams that reached the section mountain top.

“When I first started varsity coaching, it was all focused on building the program and improvement,” said Wilson, who has guided Central Catholic to five section finals. “The biggest thing, for me, is just realizing to appreciate the moment. I enjoy it a lot more — even though sometimes it doesn’t seem like it.”

“To me, the pride and tradition needs to be established. (For) the kids, it creates a desire for them to want to be a part of that and be remembered.”

That’s the challenge that hangs over this season’s Raiders, a veteran group that looks to replace Joshua Hamilton, a three-year starter and all-state honoree now playing at Chico State. Hamilton was an integral member of the three section title teams. He made his varsity debut as a sophomore point guard as the Raiders won the first of back-to-back Division IV crowns, and then he carried Central Catholic to a victory over in-town rival Beyer in the Division III final last winter.

Can the Raiders make a run at a fourth blue banner, even without Hamilton's takeover talent and junior center Nic Sani, who could miss the entire season after having surgery on his right shoulder?

The Collector believes he has the pieces.

Central Catholic returns starting guards Dayton Magana and Justin Traina, and the frontcourt is loaded with athleticism, length and energy. Forwards D’Angelo Bellamy, Myles Clayton and Charles Hallman will give the Raiders balance and a presence on the glass. Bellamy and Hallman have been slowed by football injuries, but Wilson says their presence in the locker room is undeniable.

“The pieces are there. The depth isn’t quite what it was, but it depends on kids’ attitude and how hard they want to work,” Wilson said. “I think we can make a run at it. It’s been a short period of time together. They’re going to have to become more of a unit. It’s a different style we’ll have to play. Last year, we got to ride on Josh’s back every once in awhile. It benefitted them, but now we don’t have that. They have to work together as a team.”

The growing pains have been evident.

Central Catholic finished fourth at the inaugural Mark Gallo Invitational and idles at .500 after the first eight games. It's a stark contrast to its rocket starts over the last three years. In 2015, the Raiders won 11 of their first 12 games. In 2016, Central Catholic ripped off a seven-game winning streak to start the season. Last winter, the Raiders began 9-1 and never slowed down en route to their first VOL championship.

This December hasn’t been so kind, and the schedule won’t show any sympathy. Central Catholic will host Inderkum Friday before taking part in the Valley Christian Showcase in San Jose Saturday and the Marin Catholic tournament Dec. 26-29.

If Wilson has learned anything during his time on the bench at Central Catholic it’s that the high school basketball season is long and winding. League and section titles aren’t decided in December.

Seated amongst some of the greatest moments in program history, Wilson realizes he's running low on wall space. But if a fourth section title in the cards, he’s not saying. Instead, he’ll privately celebrate the last three championship teams, as well as the section runner-ups before them, and enjoy the day-to-day moments with this year’s contenders.

“That’s a long ways away and a lot of competition to go before anything like that can be looked at,” Wilson said of the program’s bid at a four-peat. “It’s really hard to get there. I don’t know if people understand how difficult it is to get there just once. This year, it’s too soon to be able to tell. It’s always a goal (and) they know it’s a goal.”