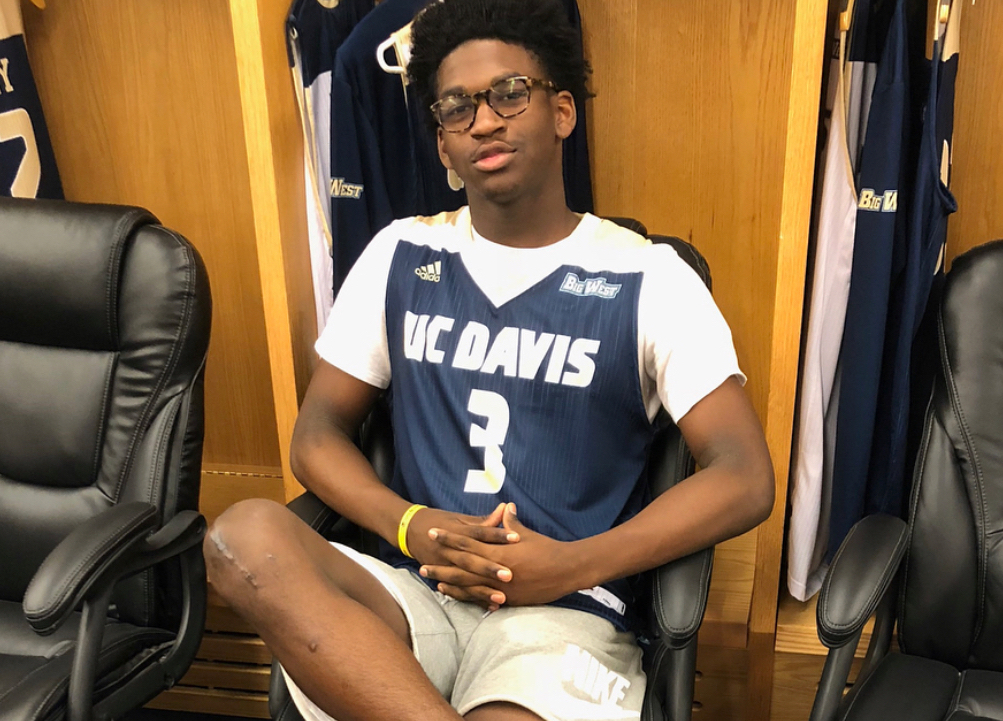 He broke his knee and thought hoops career was over. Today, he's D-I bound.

Modesto Christian boys basketball coach Brice Fantazia can remember the scene with vivid clarity. The sight of a young player on the floor, grabbing at his leg, writhing in pain and wrestling with his future. The collective gasp of a gymnasium. And the question no coach should have to answer: Is my career over?

During the summer of 2016, Aaron Murphy, then a soon-to-be sophomore, broke his right kneecap coming down with a rebound during a scrimmage at Ripon High. As the pain sharpened and the verity of the situation became clear, Murphy wondered aloud if his career at Modesto Christian and beyond was over before it every really began.

“The reason I was crying so much was because I was thinking this is it; I was thinking I couldn’t play any longer,” Murphy said. “When I first saw it broke, I was like, ‘That’s a wrap. It’s over.’ That’s where most of my pain came from.”

Said Fantazia, his coach the last four years: “I still remember him on the floor asking if his career was over. We were in the hospital pretty much all night. To see where he's at now is pretty amazing. He’s worked extremely hard and been extremely focused to get to this point.”

This point is the intersection of high school star and college prospect, the intersection of “Now” and “Next Level.” Only 16, Murphy will be a senior this year and one of the catalysts for a program with legitimate CIF State Open Division aspirations.

Murphy, who missed his entire sophomore season with the knee injury, has committed to UC Davis, completing his comeback story. He announced his commitment following his official visit with the Big West program.

“They said I could come in as a freshman and get good minutes if I keep developing,” Murphy said. “My motor is good enough. I need to get on that college level.”

Murphy chose to shut down his recruitment before his senior season. He left an offer to Cal Poly on the tables, as well as strong interest from UC San Diego, San Diego State, Princeton, San Jose State, UC Santa Barbara and San Francisco.

“He had some big-time programs interested, but he felt like that was the best place for him. He wanted a high-academic place close to home, so it’s a great fit,” Fantazia said. “They’re one of the top programs in the Big West and Aaron was one of their top recruits. They just fell in love with each other.”

The Aggies may have landed a diamond in the rough, Fantazia said. Murphy’s best basketball is still ahead of him, which should scare those on the Crusaders’ schedule this winter.

Murphy averaged 10.5 points and 6.8 rebounds on a team that swept through the Modesto Metro Conference and captured a Sac-Joaquin Section Division I banner. Three starters from that team are playing for four-year universities, including Cal Poly’s Junior Ballard, Southwest Baptist’s Tyler Williams and Northwest Nazarene’s Gabriel Murphy, Aaron’s older brother.

“They’re getting a steal,” Fantazia said of the younger Murphy, a 6-foot-6, 200-pound forward. “He’s a 16-year-old senior. I think two to three years from now will be Aaron’s best basketball. That’s when you’ll see him as an all-Big West guy and people are going to wonder how (UC Davis) got him.”

Murphy is excited about his near- and long-term future. He hopes to captain Modesto Christian into the state tournament and later launch his professional dreams in Davis.

“I’m comfortable with the decision I made, and I was really comfortable with my visit,” he said. “It’s not about the name. It doesn’t matter where you’re playing. As long as you’re balling out, they’ll come find you.”