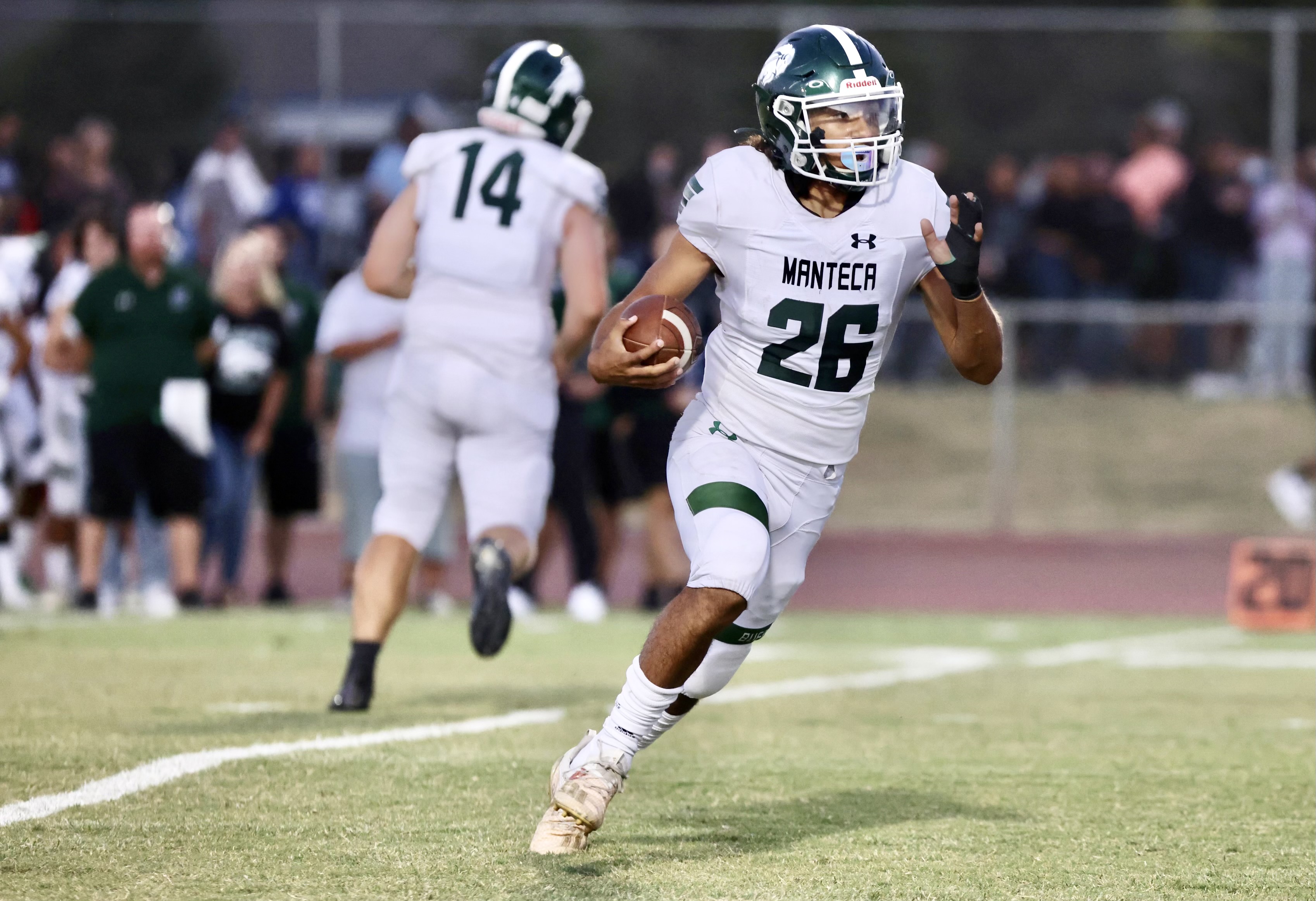 Manteca High senior running back Lyon Colon has recovered from nagging injuries to his legs and hands just in time for a clash with his former school, Central Catholic. (Wayne Thallander)

'He has his explosion back': Lyon Colon healthy in time for CC, his former team

Manteca High coach Mark Varnum met running back Lyon Colon out near the numbers, headset in hand, a smile stretching ear to ear.

In the first half -- his only half of action -- Colon was fast, shifty and programmed to finish every run in the end zone. Each of Colon's three carries against the Cougars resulted in a score. He plunged in from the 1 on Manteca's first offensive play, slipped through Weston Ranch's punt coverage for a 60-yard touchdown, and then set the rout in motion with a 39-yard burst. On that run, he went untouched ...

Until he collided with his overjoyed coach near the sideline.

Nagging injuries to his legs and hands had kept Colon from reaching top speed. He missed the victory at Turlock on Sept. 10 and was limited to less than 20 yards rushing against Cosumnes Oaks and East Union. For a player that has averaged 9.5 yards per carry for his career that's a startling statistic.

"He definitely has his explosion back. He was 100 percent, which is huge for us," Varnum said. "It was the little things slowing him down. His leg was bothering him, up in his quad. He had a messed up finger. It was little annoyances. He pushed through, though, and he's looking great. He has his explosion back."

Just in time, too.

Manteca (7-0, 3-0) will need all of its weapons as it heads to David Patton Field Friday evening for clash of the region's top large-school programs. No. 2 Central Catholic (6-1, 3-0) has never lost to the Buffaloes.

Power rankings: Breaking down No. 1 Manteca at No. 2 Central Catholic

"In that past, we've seen every crazy thing that could happen," Varnum said. "A lot of times we've matched up well, but there was one or two plays that didn't go our way. We have to play clean football and execute. They're not going to make mistakes and we have to match that."

Despite its rocky history with the Raiders, Manteca has rocketed to the top of the regional power rankings thanks to seven consecutive victories, including triumphs over No. 3 Downey, No. 4 Turlock and Sacramento-power Cosumnes Oaks. The Buffaloes are led by Blake Nichelson, a Power 5 recruit with offers from Oregon State, Boston College and Fresno State.

Nichelson impacts both sides of the ball for the Buffaloes. His pick-six interception return in overtime sealed a come-from-behind victory against crosstown rival East Union. The 6-foot-2, 205-pound junior has also rushed for 1,104 yards and 20 touchdowns, beating defenses with a style that has reminded many of former Valley Oak League MVP Justin Rice, who led Central Catholic to two CIF State titles.

"He's as advertised," Varnum said of Nichelson. "Physically, ability wise, it's hard to compare anyone to him. He's still a young kid, too. He's really now just starting to understand the game more, understand his position more. He's matured so much as a player and an adult (but) he's only a junior. He's still getting better. Who knows how good he can get."

"They are where they want to be," Canepa said. "We're playing Manteca. They've got No. 20 (Nichelson) and No. 26 (Colon), and they've got a No. 9 and a No. 5, too. That's how I see it. People decide where they want to go and they have their different reasons. We're playing Manteca. I don't get involved in all of that. We've played against guys who have left our school before. They're just football players and we want the best for every kid."

Nichelson will be a major point of focus for the Raiders, along with fullback/middle linebacker Alijah Cota and wide receiver Trey Moreland, but Canepa knows the Raiders, who have answered every challenge en route to a 6-1 start, can't lose sight of No. 26.

Colon has been a big-play running back since he burst onto the varsity scene as a sophomore for the Raiders. Thrust into a starring role because of injuries, Colon rushed for 538 yards and nine touchdowns, and topped 100 yards in a game twice during a breakout 2019-20 season.

In five games last spring, following his transfer to Manteca, Colon amassed 726 yards and 11 touchdowns, including a 301-yard performance in a 26-23 win over Oakdale. Varnum realizes the Buffaloes' chances of snapping a six-game losing streak to Central Catholic hinge on the production of both Nichelson and Colon.

"Blake has had to carry the load," Varnum said, "but when you get that 1-A type of ball carrier back, it forces defenses to pay attention to both of them."