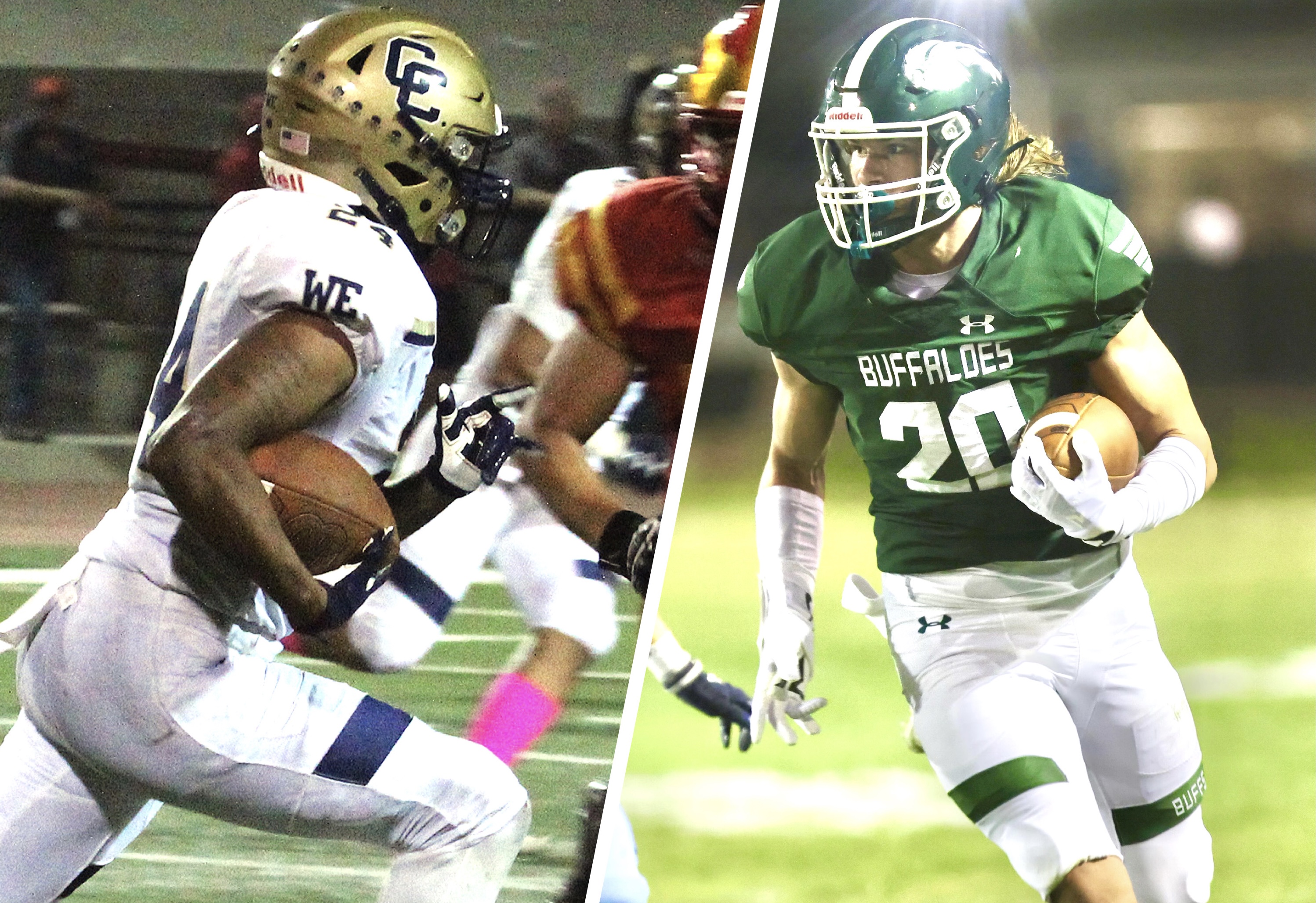 Rankings: #1 Manteca at #2 Central. Here's everything you need to know.

The weather is turning, tossing leaves and scattering debris. Expect a similar shakeup at the top of the regional power rankings.

Remove, for a second, the Valley Oak League title implications. Both teams are tied atop the region's preeminent conference at 3-0, and the winner of Friday's game has the inside track to a title ... with some work left to do, of course.

Beyond that, though, there is more to this annual grudge match of private and public school powers. The Buffaloes' impressive run to No. 1 in the large-school power rankings has been anchored by a trio of former Central Catholic Raiders: Blake Nichelson, one of the nation's leading scorers and a junior with offers from Boston College, Oregon State and Fresno State;  running back Lyon Colon, who returned to form in a 57-7 victory over Weston Ranch last week; and quarterback Hudson Wyatt, who started at Central Catholic before transferring to Downey and Manteca.

Nichelson, a 6-foot-2, 205-pound specimen whose frame and long locks have earned him the nickname "Thor," spent only his freshman season at Central Catholic. Colon starred for a brief time at the varsity level, emerging from a backup role as a sophomore to rush for 538 yards and nine touchdowns during the 2019-20 season. He had three 100-yard games that fall and looked poised to be the next 1,000-yard back in CC's fraternity of ball-carriers, and then ...

"They definitely want them bad," Manteca coach Mark Varnum. "They want to prove that they made the right choice coming to Manteca. I don't know if that's pressure, but they want to show out."

The Raiders boast a similar 1-2 punch thanks to the return of Julian Lopez, who partnered with senior Aiden Taylor to rush for 230 yards and seven touchdowns in a runaway win over Kimball, and their sophomore quarterback, Tyler Wentworth, has deep Manteca ties. Lopez strained ligaments in his knee during a win at St. Mary's. He returned last Friday with a 102-yard, four-touchdown effort.

"Now we've got two guys that can play tailback and fullback, both have good hands and bigger bodies," Central Catholic coach Roger Canepa said. "It's nice. It gives us another guy to lean on."

Manteca has stood tall against power programs, taking down No. 3 Downey, No. 4 Turlock and Cosumnes Oaks, a Sacramento-area heavyweight. A thorny schedule is nothing new to Central Catholic, which annually features one of the toughest non-league lineups. The Raiders' only loss was to San Jose's Bellarmine College Prep, 28-21, a game decided in the final minute.

Central Catholic has never lost to Manteca; the Raiders are 6-0. None of that, though, bears any weight on Friday, Canepa said. In the game of football, every year is different. Every week is different.

For Manteca, the ball spins differently. This game is one of the biggest in the Mark Varnum era.

"That's been our theme for the week: It's time. Since they've joined our league, we've won three section titles, but we've got zero wins against CC," Varnum said. "It's part of taking the next step. Can we get over the hump and find a way to beat these guys. That would be huge for our program."

1. (1) Manteca (7-0, 3-0): In their final tune-up before a demanding three-game stretch, the Buffaloes made light work of visiting Weston Ranch. Manteca led 35-7 at the intermission, bolstered by four touchdowns by Colon, including a 60-yard punt return.

3. (4) Downey (6-1, 2-0): The Knights are one of the hottest teams in all of the valley after securing a fourth-quarter knockout of Turlock in a pivotal CCAL game. Downey has won six straight and looks to have found its identity with quarterback Conner Stoddard and a defense that has created 19 turnovers, including 13 interceptions.

3. (4) Waterford (7-0, 3-0): Coach Adam Hilton has never felt comfortable traveling to Gustine, but his fears were alleviated early as Aaron Adams (310 yards, five touchdowns) and the surging Wildcats kept their dream of a perfect season alive with a 41-10 victory.

4. (3) Livingston (4-3, 1-2): The Wolves fell behind 12-0 early and never recovered. Jordan Alvarez tallied Livingston's only touchdown, a 12-yard scamper, against a stingy Indians defense.

T-5. (5) Sonora (4-3, 2-0): The Wildcats have won three straight, all blowouts. The latest was a 64-22 victory over Calaveras, annually one of the Wildcats' chief threats in the Mother Lode League. This season, it appears only Summerville -- or the injury bug -- should give Sonora trouble in the MLL.