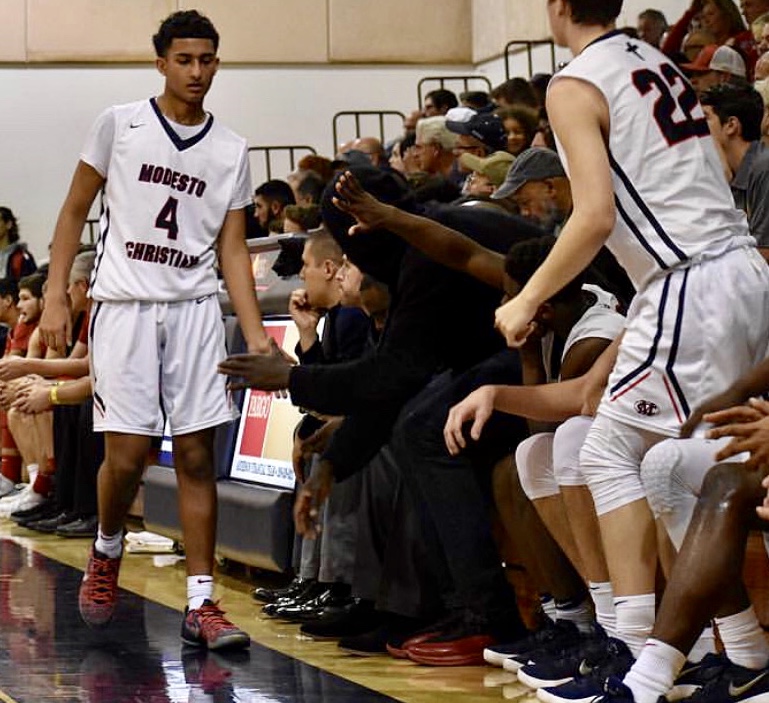 Modesto Christian junior Baljot Sahi (4) set a school record for 3s made in a game with 10 in a 103-42 victory over Tokay.

He set a Modesto Christian record with 10 3-pointers in a game. 'It feels surreal.'

Brice Fantazia can remember being in the gym, sharing court space — and trading shots — with a fourth grader with a pillow-soft jumper while honing his own game during breaks in his European playing schedule.

Even then, Modesto Christian’s third-year coach knew Baljot Sahi’s shooting stroke was something special. Seven years later, it’s truly one of a kind.

“It feels surreal, especially with Modesto Christian being powerhouse that it is,” said Sahi, a third-year varsity player. “To be honest, I always have that kind of confidence. Before every game, I usually tell myself to go out and do it, but you never know if you’re going to have a game like this.”

“I’ve known Baljot and his family since he was in fourth grade. When I would come home from Europe, he would come into the gym and work with his brothers,” Fantazia said. “He’s always been able to shoot. He's developed rest of game, but shooting is his strength — and always will be.”

The record came within the flow of the offense. In fact, no one realized Sahi was within striking range of Grays’ record until assistant coach Mike Pearson Sr. checked the halftime statistics. He quietly nudged Sahi.

“Coach Greg (Rosenbaum) said don’t tell him and let him break it,” Fantazia said, “but he knew. So did everyone else. Even the crowd knew it.”

Sahi has experienced the record in two ways. He was a freshman when Grays took aim at the record — twice. Grays tied Porter’s mark with eight 3-pointers in a victory over St. Joseph Notre Dame, and then eclipsed the mark against Johansen.

“Watching it happen was just as good as setting it,” Sahi said. “Seeing another teammate go into school history was almost as good as what I did tonight.”

Sahi averaged more than eight points per game as a freshman and sophomore, but his game has evolved as a junior. He’s shooting better than 50 percent from beyond the 3-point line and augmenting a lineup ravaged by injuries (Aaron Murphy sat out Wednesday’s game with an ankle injury) and the flu.

And with the arrival of sharpshooting freshman Devin Day, Sahi is finding more space around the perimeter. More time to shoot? That's a shooter's dream.

“I want to give him a lot of credit to Baljot,” Fantazia said. “For as good a shooter as he is, he doesn't get credit for the rest of the game. He’s got a high IQ, always makes the right read and he’s a great teammate.”