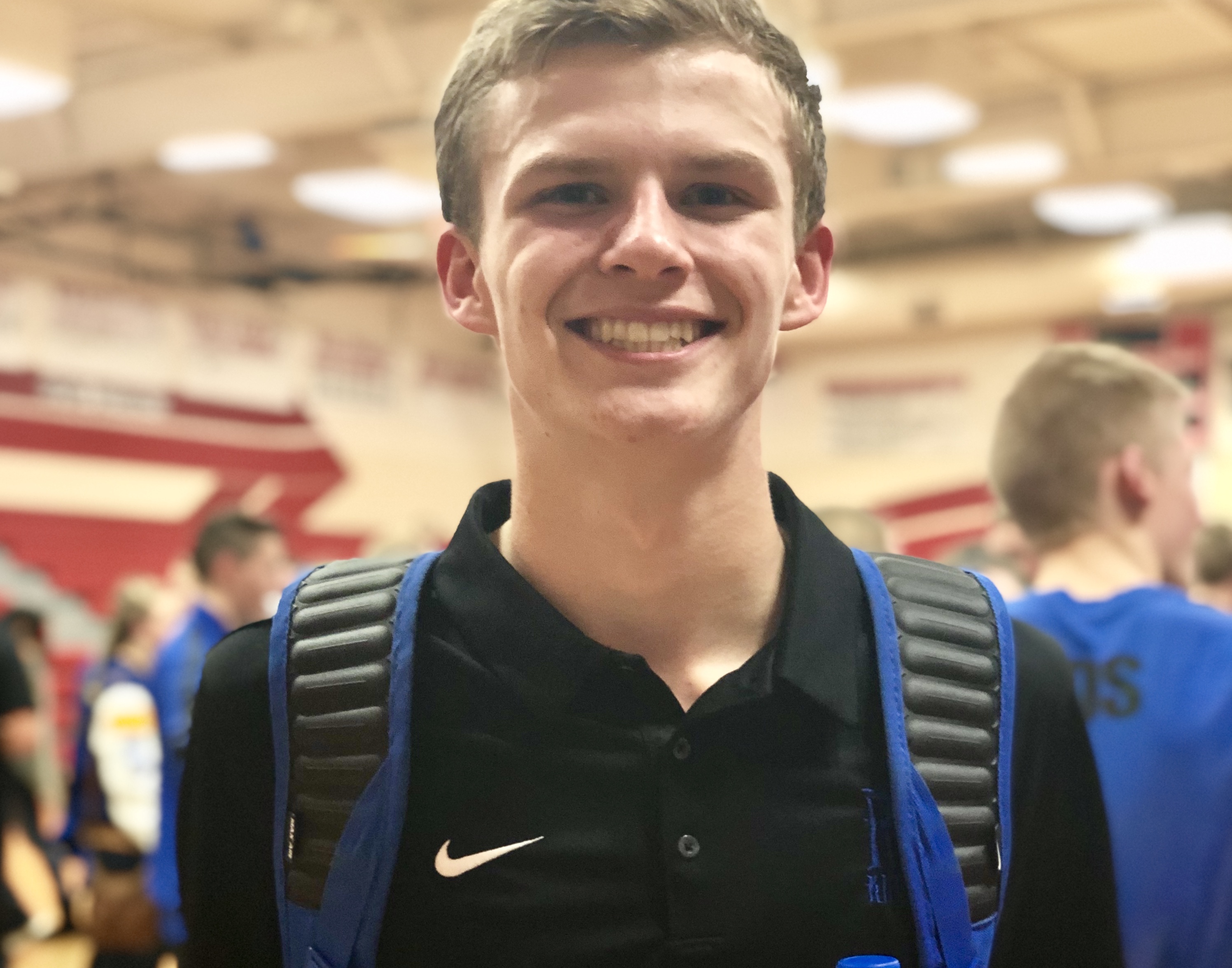 Ripon Christian's Will Gilbert scored 19 of his game-high 26 points in the second half as the Knights edged rival Ripon, 54-48, on Jan. 18, 2019. Gilbert was named the Fuddruckers Player of the Game. (James Burns)

'He trusted me and I made the shot.' How Ripon Christian upset the TVL champs.

RIPON — Will Gilbert isn’t focused on the points, no matter how many he may pile up.

The Ripon Christian sophomore guard is driven by an equation drilled into him by head coach Mark Hofman and the rest of the Knights' staff. The equation emphasizes hustle and hard work, movement off the ball and a defensive mentality.

Points, he says, are a byproduct; a small part in the bigger picture.

The Knights spotted their crosstown rival a 12-point lead in the first quarter and then inspired hope by clamping down on the Indians, forcing a 28-28 tie at the half with a swarming defense. Twice, Ripon (9-11, 4-1) went more than four minutes without a field goal as the lead — and eventually the game — got away from it.

“Our defense was awesome. They’re smart, athletic and they talk. They had great positioning … great stuff,” said Hofman, who was greeted in the hallway outside the locker room by his mother. “This is a nice win, but there are a lot of games left. TVL games are completely different. You go to somebody else’s place and you have to play hard every night. That’s the way the league is. It’s a nice win, but we still have a long ways to go.”

Gilbert defined Ripon Christian’s success on Friday. He summoned strength from his defense and hours of court time with injured teammate Braden Van Groningen (labrum), a starter during the Knights' run to a Sac-Joaquin Section Division VII title last winter, and then turned it loose on the offensive end.

With Ripon center Vincent Olmo casting a long shadow in the paint, the Knights, who will climb in next week’s FrontRowPreps.com small-school poll, sought their points from the perimeter. Gilbert scored 19 of the team’s 26 points in the second half, including four 3-pointers. Fittingly, he closed the game from the free throw line, completing a 26-point outburst.

Jacob Van Groningen netted 14 and Cade Alger had nine for Ripon Christian (14-6, 6-0), which punched a sizeable hole in the Indians’ bid at a three-peat in the TVL. The Knights closed the game on a 9-2 tear, securing their seventh win in eight games.

On the game’s biggest possession — a splash 3-pointer by Gilbert with less than two minutes left— the 6-foot-4 shooter didn’t thump his chest or hog the spotlight. Instead, he praised the hustle and fight of teammate Brock Nunes, who dueled the 6-foot-9 Olmo for a rebound and extended the possession with a tip to Gilbert.

Nunes gives away seven inches to Olmo, arguably the best rebounding big man in the southern half of the section.

“He hustled it out and kicked it out. He trusted me and I made the shot,” Gilbert said. “It’s a lot of teamwork.”

Olmo flirted with a triple-double. He had 14 points, 15 rebounds and nine blocked shots, including blocks on four consecutive possessions in the third quarter. His final field goal gave Ripon a 46-45 lead with 2:32 left.

Troy Brogan led the Indians with 19, including 10 in the first quarter as Ripon rocketed to a 22-10 lead.