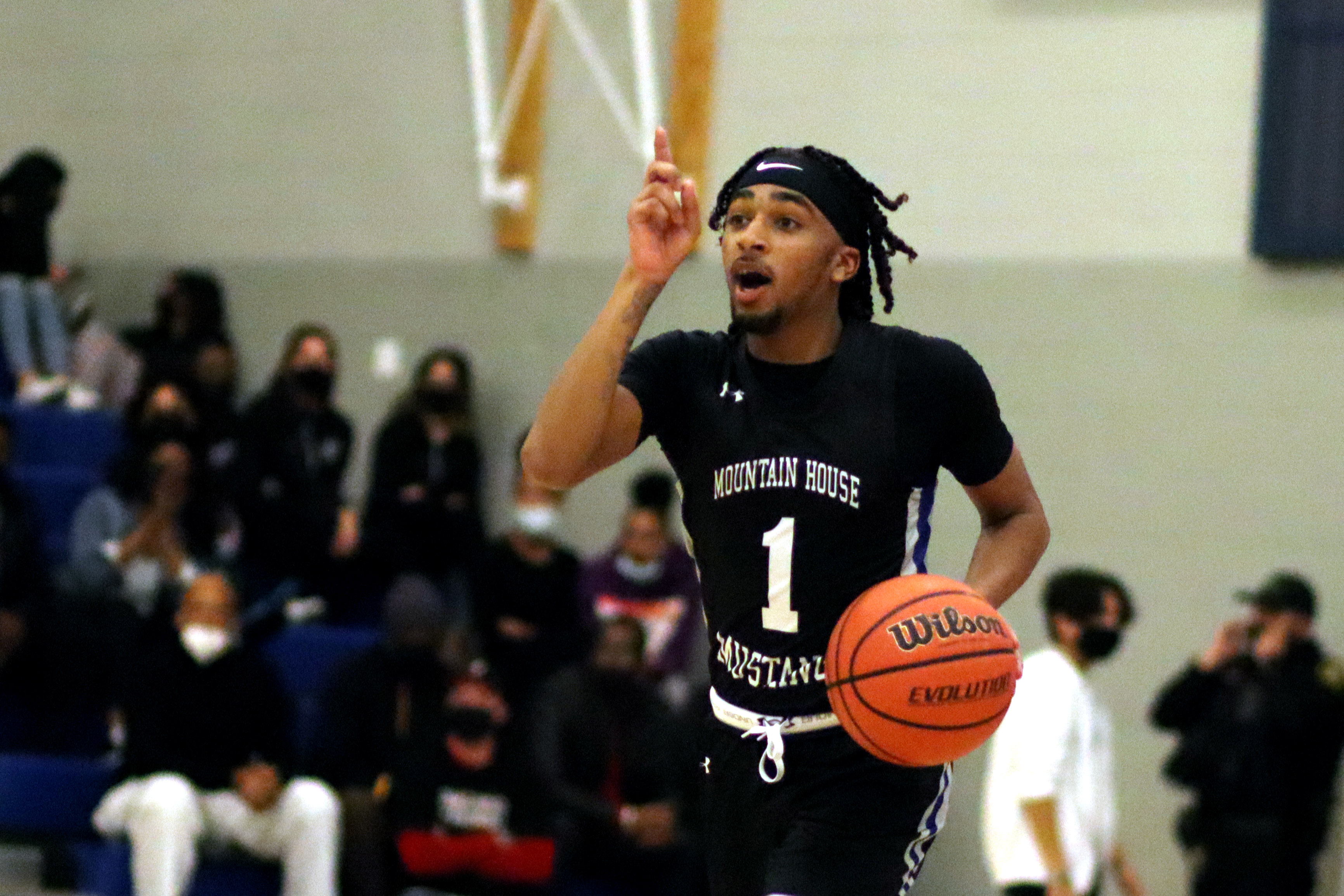 MOUNTAIN HOUSE – The Lathrop High Spartans walked into the Mountain House gym with school history on their minds Tuesday night.

Mountain House was not into any history lessons.

The Mustangs, the resident heavyweights of the Western Athletic Conference, denied Lathrop an outright title with an emphatic 73-50 victory. Lathrop (founded in 2008), seeking its first boys basketball league crown, still can gain no worse than a co-title with a regular season-ending win at Los Banos on Thursday night.

But there were no celebrations on Mountain House’s hardwood. The Mustangs had none of it.

“Everyone is always looking to come in here and beat us,” junior guard Dexter Francis said after shredding the Lathrop defense for 15 points. “We have to keep winning to keep up with the past and bring it to the future and get another championship for our school.”

Francis, 6-foot-2, runs the floor with long strides and accelerates as he glides toward the rim. He did not play during Mountain House’s 74-64 win over Lathrop last month. Which meant he was anxious to join the party.

“I couldn’t wait to play them,” he said. “We played extremely well and as a team with great energy.”

“We didn’t execute on defense, had a lot of turnovers and gave up too many outside shots. They (Mountain House) knocked them down,” Lathrop coach Charles Roth said. “I think our kids were nervous. This was a big game.”

“Mountain House is a basketball town,” Ursal said. “Everybody is hoopin’ at the youth level.”

It follows that the Mustangs will not easily give up the WAC baton. They have three league games left, including an important one Thursday night against a Ceres team (10-3, 17-9) that beat them. If they win all three, they potentially could share the title with Lathrop.

The competitive WAC race has delivered some provocative results. Lathrop labored against Mountain House but swept both Beyer (15-12, 9-4) and Ceres, twice beating the Patriots by a single point. Mountain House lost back-to-back to Beyer and Ceres but, since then, has reeled off eight straight victories.

Lathrop worked hard to trail by only four points early in the second half before the Mustangs launched their pull-away.  Francis scored in transition and connected from 12 feet, followed by a fast-break layup by Steven Titus and a basket off a turnover by Isaiah Chenier.

“I liked our energy and the team-oriented basketball,” Ursal said. “We’ve worked on reducing the defensive rebounds and not giving up on the ball and expecting them to miss, then go get it.”
Lathrop, led by guard Camryn Haynes with 12 points, Kameron Jones with 11 and sophomore Izaias White with 10, must turn the page quickly. There’s still a lot to be gained.

“This game is over,” Roth summarized. “We go into practice tomorrow, and then we take care of business.”