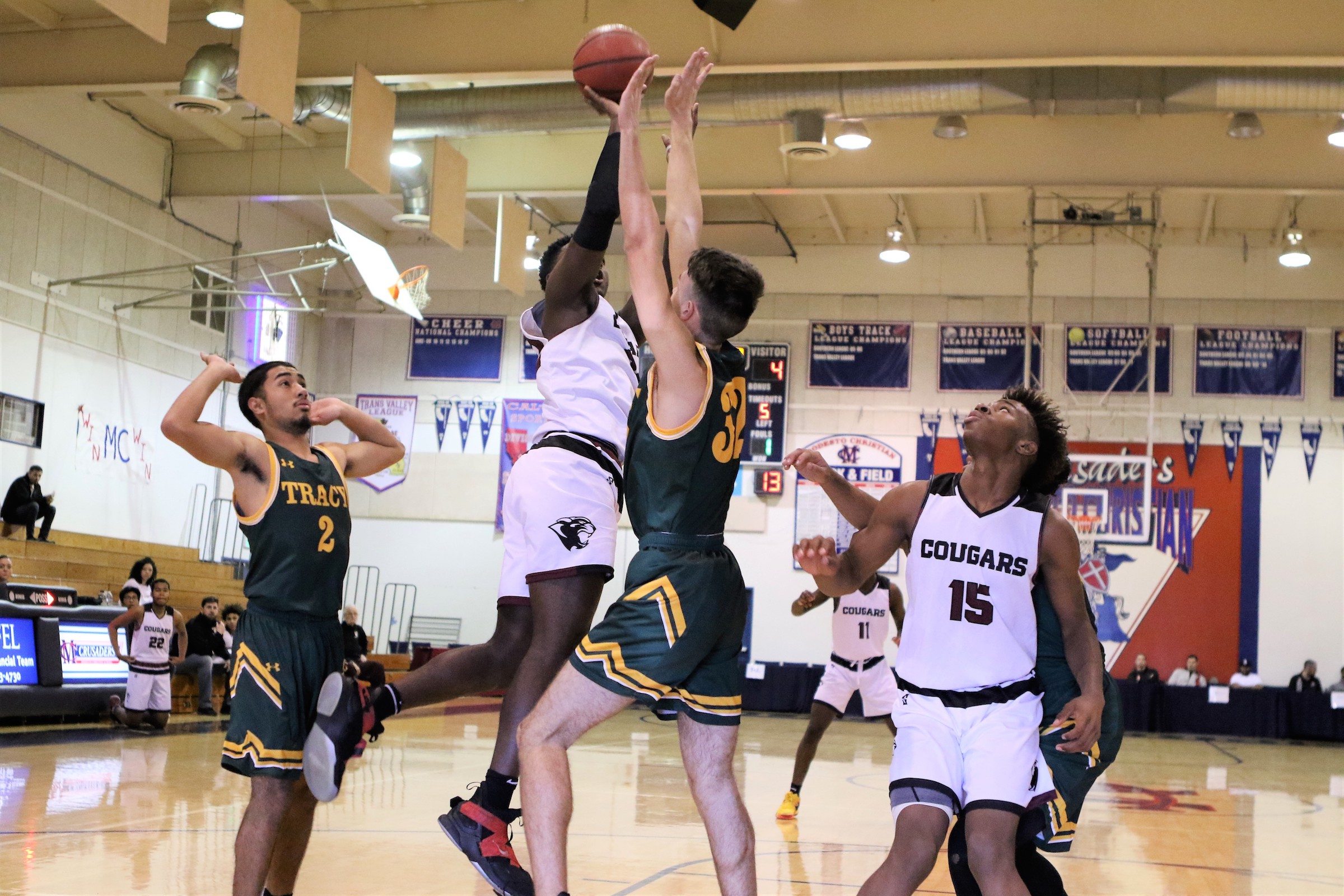 Weston Ranch's Gavin Wilburn drives the lane in a victory over Tracy on opening night of the Holiday Hoop Classic. (Sean Kahler)

A recap of Day 2 at the 19th annual Holiday Hoop Classic:

Shooters shoot … even through the misses.

Cold to start Thursday’s quarterfinal with Clovis West, Vanden senior guard Jonathan Cobbs connected on two 3-pointers in a wild second half, including the go-ahead trey with 35 seconds left.

The Vikings trailed for most of the game, but never let the Golden Eagles, a Division I power from the Central Section, get too far ahead.

Clovis West took a 64-60 lead on a 3-pointer by sophomore Cole Anderson with 2:29 left, but Vanden closed on a 9-2 run to put themselves in position for a second straight tournament title.

The Vikings won the Gaucho Holiday Tournament last week and went 3-1 at the Mark Gallo Invitational earlier this month. Vanden has won eight straight games and will play the winner of Turlock-Weston Ranch in Friday’s semifinal.

Elijah Simmons tied the game at 64-all with a transition layup with 90 seconds left. After Clovis West missed a free throw, Cobbs found himself all alone along the wing. He never hesitated, splitting the rim — and Clovis West’s bid at redemption.

"Once I touched it, I knew I had to take it," Cobbs said. "I was focused and I had all the confidence in the world."

The Golden Eagles had hoped to meet host Modesto Christian in the final. The two locked horns in the final of the Nike Invitational earlier this month with the Crusaders rolling to the crown.

There won’t be any payback.

Not at the Holiday Hoop Classic.

"We're a team to be reckoned with," Cobbs said.

Grayson Carper paced the Golden Eagles with 18 points, while Anderson finished with 12.

Up next: Turlock vs. Weston Ranch

The Cougars overwhelmed Turlock in the quarterfinal round, building a lead as large as 31 early in the fourth quarter. Weston Ranch, climbing the MaxPreps computer state rankings, will play Vanden in Friday's semifinal.

"In a four-game format like this, you want to build at every level," Weston Ranch coch Chris Teevan said. "We're going to play a really good team tomorrow (Vanden has won eight straight), so we need to have a championship level standard. We need to not play to schools or scores, bu to a championship standard."

When asked on Wednesday if the Cougars were the best public-school program in the southern half of the Sac-Joaquin Section, Teevan wouldn't say. Instead, the Beyer High graduate was complimentary of his alma mater and Manteca, both of whom have played deep into the postseason. Beyer has reached a section final in each of the last two seasons, while Manteca won a CIF State championship in 2015.

If two days at the Holiday Hoop Classic are any indication, Weston Ranch belongs at or near the top of any "best of" lists. The Cougars pummeled the Bulldogs, a team flying high off an opening round upset of St. Patrick-St. Vincent and no stranger to the VOL's upper echelon. Turlock is 0-4 against the VOL, but in losses to Manteca, Sierra and East Union at least it had a shot.

On Thursday, Turlock was never in the game. Weston Ranch led 23-12 after one and 45-25 at the intermission. Donjae' Lindsey led four Cougars in double figures with 17. Gavin Wilburn netted 13, Lydell King had 12 and Mi'Son Coilton finished with 11.

For the second night in a row, Cameran Sherwood led the Bulldogs in scoring. He had 10 and watched much of the fourth from the bench, along with the other starters.

Phillips holds offers from UTEP and Fresno State, but struggled to match the pace and shot-making ability of Mahaney.

The Cougars advance to the semifinal round, where they'll lock horns with tournament host Modesto Christian. The Crusaders pulled away from Manteca in fourth quarter for a 71-52 victory.

Campolindo is getting healthy at the right time.

Carter Mahaney returned to the floor after missing Wednesday's opener with a toe injury. Carter Mahaney, a junior floor general, netted 16 points, showing no ill effects from having his foot in a walking cast for a week.

Foothill ran out of gas in the second half. Edward "Squid" Turner led all scorers with 24 points, but limped off the floor in the final seconds. Eli Seales finished with 10 in the loss.

In the first game of the day, the Eagles, still stinging from an opening night loss, made quick work of the Tigers. Bakersfield Christian knocked down nine 3-pointers in the first half and scored the first 16 points of the game en route to the blowout. The Eagles led by as many as 30 in the first half and highly-touted senior guard Kadar Waller had eight points during the flurry, including two 3s.

Trailing 16-0, Jihad Salmon ended Patterson's scoring drought with a finger roll in the lane at the 4:31 mark. The Tigers trailed 28-3 after one quarter.

Waller, who has received interest from San Diego State, Fresno State and Cal State Bakersfield but remains unsigned, led all scorers with 15 points. He sat most of the fourth quarter.

Lendl Henderson chipped in 11 for the Eagles, who wanted to make a statement in the morning game. Bakersfield Christian dropped into the consolation bracket after losing to Vanden on opening night.

As for his recruitment, Waller isn't too concerned about his next stop. For now, he wants to guide Bakersfield Christian on a long postseason run and work on his personal development. Part of that, he says, is remaining patient and focused on the Eagles' team goals.

"It's all about being patient," he said, "and knowing it will come."

Patterson was led by sophomore Logan McCleery, a three-sport star who had 13 points. McCleery is an all-Central California Conference quarterback and budding baseball prospect.

Semaj Pearson netted 11 in the loss.

Quick starts to the first and second halves advanced St. Patrick-St. Vincent in the consolation bracket.

Behind a balanced attack, the Bruins opened the game on an 11-4 tear and led Tracy, a Sac-Joaquin Division I playoff team a year ago, 34-26 at the intermission. St. Patrick-St. Vincent stretch the advantage to 16 in the third quarter with a 14-6 charge, highlighted by a pair of 3-pointers from Esai Contreras.

Six-foot-10 center Dishon Jackson scored a team-high 16 points, including a two-handed flush in the third quarter. Akil Edwards continued his strong start to the tournament with 10 points. The senior guard, who is being recruited as a football player (quarterback/athlete), had 22 in an opening loss to Turlock.

"What was different from last night was our energy," Edwards said. "Today we showed up, we was ready to play and we were fired up, and it showed. We played like that through the whole game."

Tracy has now lost three of its last four games.

Troy Brogan hit the floor in front of the Ripon High bench, tossed by a Centennial player. The Indians’ junior winced as he grabbed his ribs and waited for his teammates to rally around him.

Brogan played through contact throughout the victory. Not that he minds. Brogan was born the son of a collegiate basketball coach and raised in gymnasiums throughout the Central Valley, but as of late, he’s excelled on the gridiron.

Contact is becoming sort of his thing. Brogan was named to the all-Trans-Valley League team as a first-year defensive end and will be a key cog in the Indians’ bid at a three-peat next fall.

Today, he’s still finding his basketball legs, and his assimilation may be just the boost the Indians need. Ripon had lost seven of its last eight games before Thursday’s win over a Central Section Division I program.

"The thing that was the worst was our chemistry," Brogan said. "We just weren't in sync, but we're starting to see that now. We saw that last night with MC. Even though we lost, I thought it was a competitive game. We're starting to click ... just like we did last year."

Brogan had 14 points, and possibly a few bruises, while 6-foot-8 center Vincent Olmo led all scorers with 28. Baz Cheema netted 18 as the Indians rebounded from an opening loss to Modesto Christian.

"Everybody makes fun of me for that," Brogan said of his penchant for falling to the floor. "I'm on the ground a lot."

Even during breaks in play, Beyer senior McKay Bundy is rarely still. He might pace, bounce a knee, or organize his teammates

When the ball is live, Bundy challenges every rebound, steps in front of attackers moving at full speed, and runs the floor with fast-action quick guards Avalon White and Dom Dancer, knowing he’ll be rewarded.

His activity characterizes the Patriot way. Under coach Kyle McKim, the undersized Patriots want to run, utilizing their speed and shooting ability to unnerve teams.

The 6-foot-4 Bundy had a career-high 30 points on 13 field goals, most of them strong finishes around the rim. He isn’t a very big post, in height or girth, but his motor makes up for his vertical limitations.

"I do whatever it takes to help my team win," Bundy said. "I play the post, but I come out to guard and expand the floor and open up the middle. I get a lot of layups because our guards are quick."

White finished with 23 points, James Tonge netted 14, and Hayden Keller had 13 as the Patriots scored a season-high 103 points. The Patriots topped the century mark with just under two minutes to play.

"We've been playing at a fast pace all season," We knew if they wanted to play fast, we're going to play fast right back and put up as many points as they do."