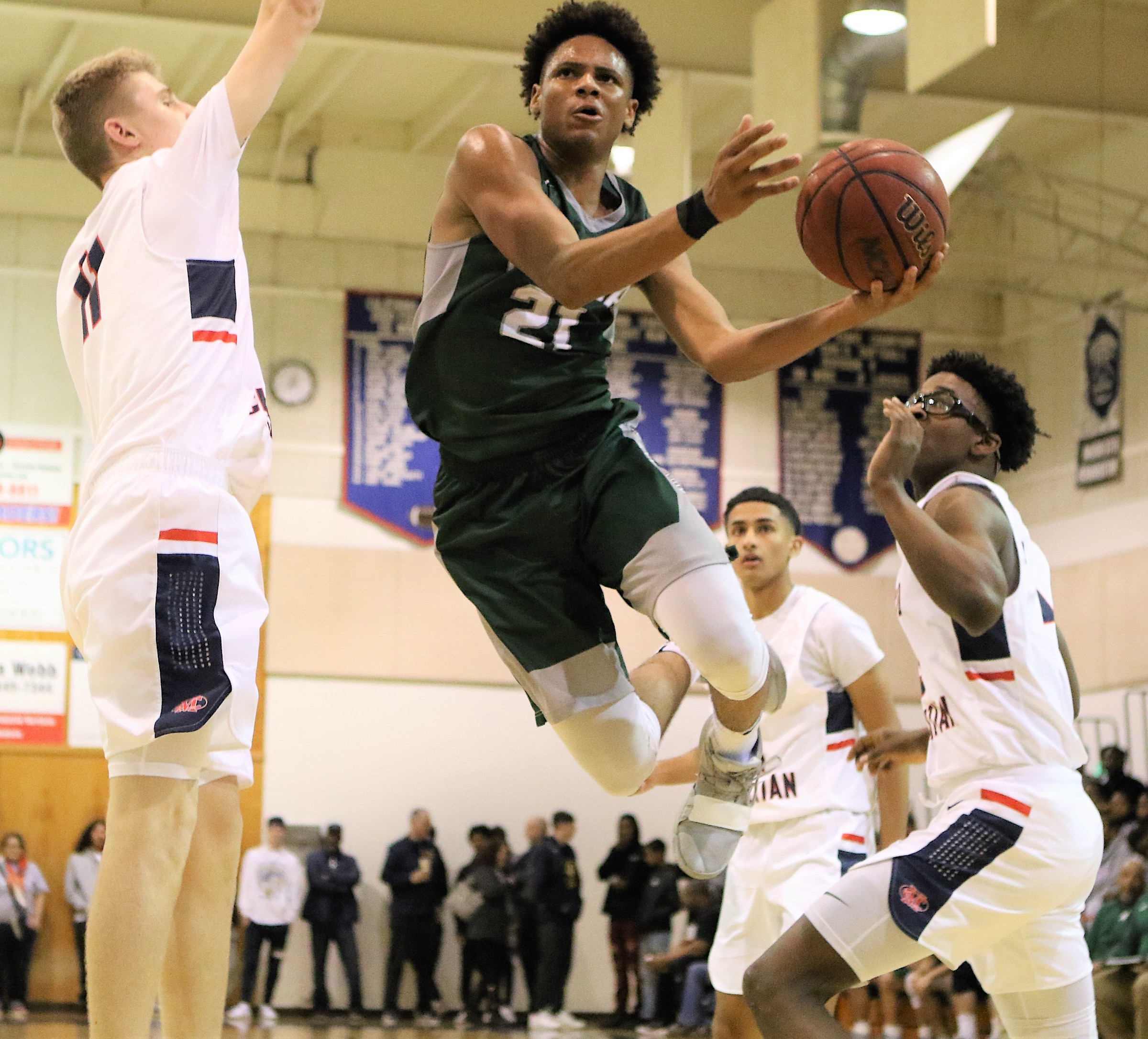 Manteca's Domonick Victor is averaging 24 points at the Holiday Hoop Classic, including a game-high 18 in a loss to Modesto Christian on Thursday, Dec. 27, 2018. (Sean Kahler)

Modesto Christian boys basketball coach Brice Fantazia was not happy, and it wasn't just because his Crusaders lost 63-30 in a semifinal matchup against Campolindo (Moraga) on Friday at their own Holiday Hoop Classic.

No, Fantazia was not pleased because a dozen games into the season, he’s still searching for answers to questions that shouldn’t even need answers.

“We’ve got to start finding out who wants to play hard and who doesn’t,” said Fantazia, who led the Crusaders to the Division I Sac-Joaquin Section championship last season. “It’s an issue, with egos and slots and playing time, and that’s on me as a coach."

Modesto Christian looked out of sync for much of the first half, while the Cougars played hard and smart, and took control of the game without one of their best players -- 6-foot-3 senior guard David Ahazie. Campolindo never trailed in the game until Alex Merkviladze flipped a no-look, reverse layup over his shoulder to give the Crusaders a 60-59 lead with 1:42 remaining in the contest.

But the lead was short-lived.

Carter Mahaney’s bucket with under a minute to play gave the Cougars a 61-60 advantage and, after MC called timeout with 34.7 ticks remaining, and MC turnover allowed Campolindo to close out the game from the free throw line. Mahaney, a junior, led all scorers with 22 points, while his brother, freshman Aiden Mahaney, added 17.

Modesto Christiab’s big men — 6-8 Merkviladze (21 points, 13 rebounds), 6-9 Tsotne Tsardsidse and 6-7 Aaron Murphy combined to go 17 of 23 (74 percent) from the field
"(Alex) was great off the bench," said Fantazia, now in his third year as MC coach. "He wasn't pouting, he wasn't complaining, and he's going to get more touches and more playing time."

Now, dropping into the loser’s bracket, the Crusaders will have to play at 6 p.m. Saturday against Vanden, a team they’ve already scheduled a regular-season matchup against on Jan. 19. Four days before the Vanden game, MC will take on St. Mary's in the Tri-Cities Athletic League. The Rams beat Campolindo two weeks ago 58-51. Campolinddo will play Weston Ranch on Saturday at 7:45 for the tournament championship.

"We've got stuff to fix," said Fantazia. "We're not as good as we think we are. We've got talented guys but we can't just put on an MC jersey and expect things to happen. That's now how it works."

Clovis West 97, Turlock 79 -- The Bulldogs were within 65-59 late in the third quarter and had a chance to cut the lead to three, but Cole Carrigg's 3-point attempt rattled in and out of the rim, and the Golden Eagles were able to pull away from there. Turlock outscored Czlovis West 24-22 during the third stanza. Cameron Sherwood finished with a game-high 27 points for the Bulldogs while Cam Walker added 17 and Carrigg finished with 15. Clovis West's Anthony Cole paced all scorers with 28 points.