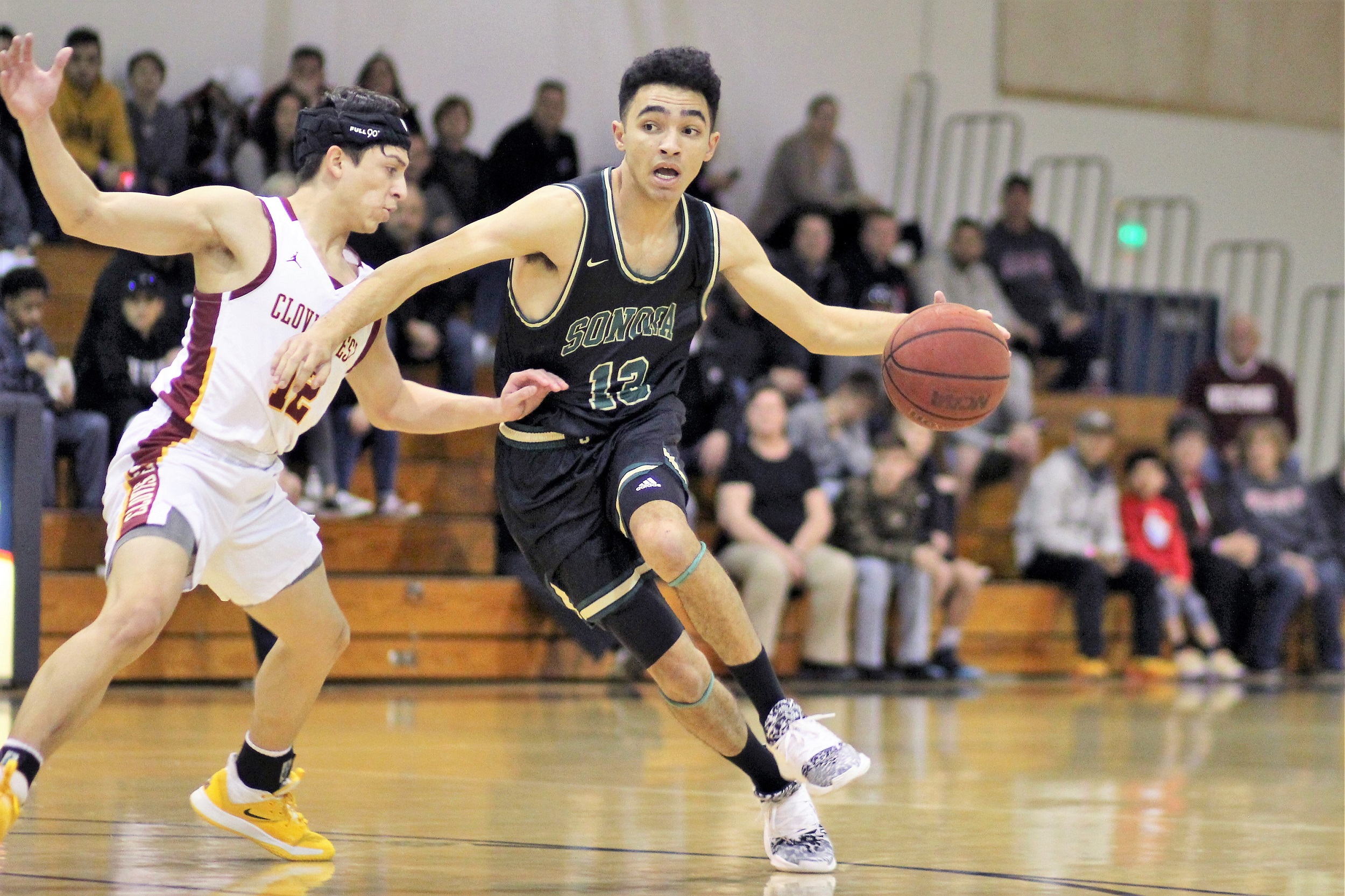 SALIDA — Teams from the Front Row region had a rough go of it at the first day of the 20th annual Holiday Hoop Classic, with only defending champion Weston Ranch and host Modesto Christian advancing into the winners bracket. For six other local squads — Gregori, Ripon, Sonora, Beyer, Manteca and Turlock — the consolation title will have to be enough.

In the prime time matchup of the evening, Modesto Christian (4-4) dispatched a previously undefeated Gregori team (11-1) that was looking to send shock waves throughout the Sac-Joaquin Section with a victory over the perennial powerhouse. For much of the first half, the Jaguars traded haymakers with the Crusaders, and led 21-18 after the first quarter on Kyle Monk's deep 3-pointer. But MC closed the stanza on a 22-8 run to take control.

“We gave our best effort tonight,” said Gregori coach Ryan Green, who guided his team to the first-ever Central California Athletic League title last season. “I loved the matchup with MC and we proved we can play with them and not be embarrassed. It’s a good moral victory. We have to remember this, because I’m sure we’ll see them in the playoffs at some point.”

Modesto Christian was led by Michael Pearson’s 24 points, followed by 21 from Alex Merkviladze and 17 from Baljot Sahi — all but two of his coming from long distance.

Gregori’s Julian Brown, a 6-foot-3 senior, finished with 20 points, with 12 of those coming the first quarter.

JAMES LOGAN 73, RIPON 43 — This one got out of hand late, but for a large chunk of the contest,  the Indians hung in there against the reigning CIF Division I Northern California champions.

Fresh off its state 4-AA football championship, six Ripon players are making their way to the hardwood from the gridiron. Four of those six are projected to play significant minutes and three of those four are projected to start at some point.

“That’s where we are right now,” said coach Justin Graham, whose team was a Division IV section semifinalist last season. “We’ll get better. We know it’s a process. The guys know that and the fans know that.”

Malik Taylor led Ripon with 16 points, while Brah’jon Thompson totaled 17, 14 of which came in the opening stanza.

“We’re really focused on the process of the thing instead of results,” said Cougars head coach Chris Teevan, whose team went 31-2 last season, its only losses coming to Open Division playoff teams (Mitty and De La Salle) on either end of a 30-game winning streak. “We expect to win every game, though. There hasn't been a team that’s overwhelmed us.”

Turlock (5-5) will have a different starting five for Friday morning’s game as coach Doug Cornfoot searches for answers.

“We have to start learning what it takes to play basketball,” said Cornfoot, who team was paced by 10 points from co-captain Joey Cusenza. “We have no fight. I’m looking for someone — or a group of individuals — that will lead this team. I told them I’m tired of wanting it more than they do.”

CAMPOLINDO 76, BEYER 29 — The.Patriots scored just 10 points in the second half against a Campolindo team that is coming off a CIF Division II state championship last season.

Six-foot-7 freshman Dewayne Thomas led the Patriots with seven points, all coming in the fourth quarter, while Emmanuel Callas led the Cougars with 13 and teammate Logan Robeson had 12 — all from three-point range.

CLOVIS EAST 54, MANTECA 43 — Nick Bell scored a team high 19 points in a losing effort for the Buffaloes (4-7).The Timberwolves got 24 points from Jermal Pittman.

OTHER FIRST-ROUND GAMES — Geronimo De La Rosa scored 20 and Ronnie Ray added 16 as Brookside Christian  (7-3) of Stockton defeated Bullard (6-8) of Fresno 60-54. Omarion Thomas Marshall led Bullard with 17 and sophomore Tyric Herod chipped in with 14 … Vanden (8-2) got 25 points from 6-foot-5 sophomore wing Teiano Hardee and 20 from 6-6 sophomore wing Takai Emerson-Hardy as the Vikings bested Liberty Ranch (5-8) 76-52. Jalen Patterson had exactly half of the Hawks’ points, with 21 of those coming in the first half.