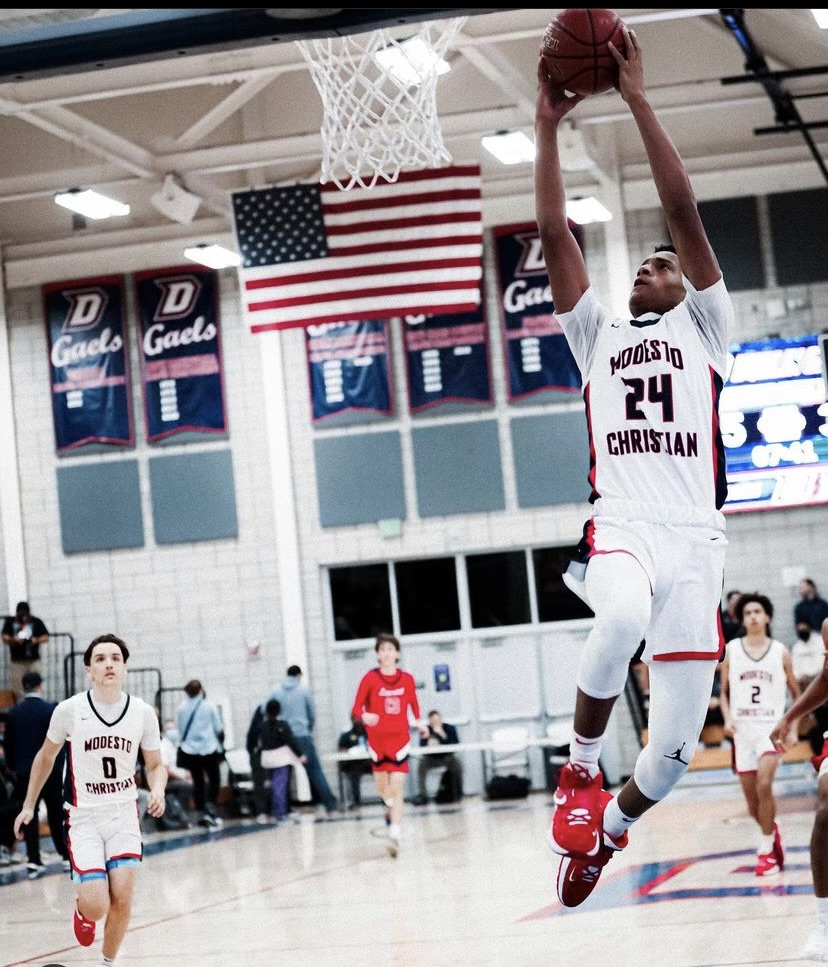 Modesto Christian sophomore Jamari Phillips rises for a two-handed slam. Phillips paces the Crusaders in scoring with 24.4 points per game.

Home for the Holiday: Crusaders eager to play in front of Hoop Classic fans

Well-traveled through the first month of the season, the Modesto Christian boys basketball team will trade in its frequent flyer miles for its first home game.

The Crusaders tip off the 21st annual Modesto Christian Holiday Hoop Classic on Monday evening against Beyer, pitting two of the region's brightest basketball minds against one another.

Modesto Christian is coached by Brice Fantazia, an alumni and former pro who has revved the Crusaders, the Sac-Joaquin Section's most decorated program, to a new level.

Beyer, meanwhile, is skippered by Kyle McKim, whose return to his alma mater has turned the Patriots into one of the top public schools in the southern half of the section. The Patriots have lost three of their last four games, but did win the Modesto City Classic to open the season.

"I've got a tremendous amount of respect for Kyle. I think he's one of the better coaches in Northern California," Fantazia said. "They always do a good job when they play us. Kyle knows what he's doing. We don't want a walkover (in the first game); we want a challenge and we expect Beyer's best."

That standard is reflected throughout the bracket. Since its incarnation in 2000, Holiday Hoop has blended top local programs with elite out-of-area competition, and this year is no different. The heavyweights traveling from afar include Durango of Nevada; Clovis West, Clovis East, Bullard and Bakersfield Christian of the Central Section; Vanden and Cosumnes Oaks from the Sacramento area; and Pleasant Valley of Chico, a state top-10 Division III program.

Modesto Christian is the draw.

The Crusaders will introduce a young and talented roster to its fan base, led by sophomores Jamari Phillips and Ty Virgil, as well as junior BJ Davis. Phillips is ranked No. 17 nationally in his class by ESPN and holds offers from Kansas and USC, among others. He is averaging a team-best 24.4 points per game.

Davis is being courted by Hawaii and San Jose State. He's averaging 15.6 points, 7.4 rebounds, 4.4 assists and 3.0 steals. Virgil transferred to Sisk Road from a Southern California prep school. The 6-foot-4 sophomore announced earlier in the month his first Division I offer from Portland.

Had a great conversation with @CoachLegans and I am blessed to receive my first D1 offer from @PortlandMBB 💜🤍!! pic.twitter.com/pNWijvPXNX

Modesto Christian has won 21 of its last 22 games, including all 15 of its games during a shortened COVID season played without fans. This winter, the Crusaders have beaten Nevada's third-ranked team, Durango, on the road, and won three of its four games at the Clovis West Nike Invitational. They opened the season with a 16-point victory over San Joaquin Memorial at Dublin High during the NorCal Tip-Off Classic.

The road has been Modesto Christian's proving ground.

"When we beat Durango at Durango, that showed our potential; that showed how good we can be," Fantazia said. "But the Clovis North loss also showed us how young we are. We had some mental mistakes and some guys hadn't been in a huge game like that. Then some stuff happened and the game got away from us.

"A lot of people see the talent, but they don't realize just how young we really are. The expectations are always what they are at MC, but the young guys got some growing up to do.  ... We figured playing on the road was the easiest way to grow up. Now we get to see."

Fantazia will look to senior Alex Argandar to stabilize a team with one freshman, four sophomores, and six juniors. The 6-1 point guard ranks among the team's leaders in assists (3.9), steals (2.1) and blocks (1.1) to go along with a 6.3 scoring average.

Argandar has been raised on campus. He jumped the railing at the University of the Pacific to celebrate on the court with the team during its thrilling 60-56 win over Sheldon in the 2018 Division I section final. He studied players like Christian Ellis, Junior Ballard, Michael Pearson and Tyler Williams, waiting for his turn in the spotlight.

On Monday, he becomes the player future Crusaders mimic and admire.

"There's a lot of pressure on our young guys. Every game there are multiple college coaches and scouts. Our young guys, at times, they get that deer in the headlight look. He's the one kid who doesn't care about any of that," Fantazia said. "He's that guy that I look to keep our young guys focused on winning.

"We were in practice the other day and I told him, 'Man, this is your last Holiday Hoop.' I think he's definitely excited, but the first thing he said was we need to win it. He doesn't care about all that other stuff; he just wants to win."

Argandar embraces the leadership role. Few know the program and its history as well as he does. For instance, Argandar is well aware of Modesto Christian's highs and lows at the Holiday Hoop. In 20 years, the Crusaders have made nine finals appearances, but they've won just four times.