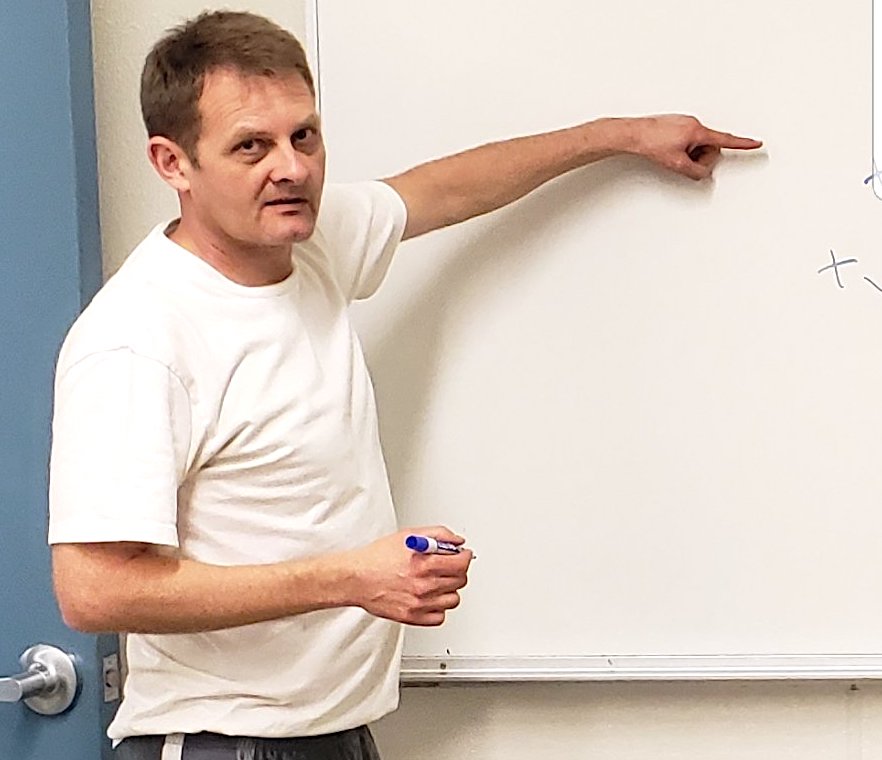 Ripon Christian boys basketball coach Mark Hofman diagrams a play on the white board during a practice. Now in his fifth season, Hofman, a former Knights player, has the challenge of defending a Sac-Joaquin Section Division VI championship.

RIPON — Game 13, the last one for the Ripon Christian High Knights, was felt the hardest by their quarterback.

“That was the most sore I’ve been after any football game,” Cade Alger said, “but it was all good.”

Alger deserved some rest after he led the Knights at quarterback (he threw 20 touchdown passes) to their first 12-win season in the school’s 15-year football history. And rest he did — for one day.

Less than 24 hours later, he walked onto the hardwood and logged about 10 minutes during RC’s win over Denair in the third-place game of the Riverbank Tip Off Tournament. It turned into good therapy after the beating he took the night before in the Knights’ 57-14 loss to eventual state champion Hilmar in the Sac-Joaquin Section Division D-VI final.

Alger, 6-foot-8 and 2-by-4 slim, proved his athletic bona fides with that football-basketball transition.  He was joined by three of his basketball teammates, in fact, as Ripon Christian quickly pivoted from its landmark football season.

“Getting back into basketball shape is taking me a little bit (of time),” Alger said. “I still got a lot to work on. I’m getting better with the conditioning part of it and I’m increasing my minutes.”

The Knights (6-4) will lean hard on Alger during the Trans-Valley League race which began with Ripon Christian’s 58-41 victory at home Tuesday night over Hughson. Alger, who finished with a game-high 20 points, stabilized RC after the scrappy Huskies (2-9) sliced a 16-point deficit to only six early in the fourth quarter.

Ripon Christian is learning about what actually is a good problem to have — athletes changing from football to basketball.  For starters, fourth-year basketball coach Mark Hofman noticed Alger’s improved strength.

“You can see his muscles,” Hofman said. “Basketball takes three weeks to get your basketball legs. The guys missed 28 games or practices, but they had a good football season. We were very happy about football. Because of weights, they come in physically stronger and mentally a little tougher.”

Hofman acknowledged the cooperation between coaches, a must for a student body with only about 95 boys.

“If you want three basketball teams, about 45 percent of the boys are playing,” he said. “You have to shift back and forth a little bit. So we have different rules sometimes.”

Alger, after six games, averages about 16 points and 11 rebounds. He’ll carry much of the load along with 6-4 sophomore Will Gilbert, who sits at about 11 points per game after his 16 points against the Huskies. The Knights also will look toward 6-5 junior Jacob Van Groningen, 6-1 senior Austin Ries and 6-2 forward Brock Nunes.

“They say we’re one program,” Hofman said. “We had a shooting coach come in last summer and the football coaches let the basketball athletes go for a couple of hours. We have to work together.”

Last season, the Knights claimed section title No. 10 by beating Sacramento Adventist 59-51 for the D-VI title. But 11 nights later, they were upset by the same team 57-47 in the NorCal finals.

RC, which finished in a three-way tie for second place behind TVL champion Ripon last year, expects to be a contender.

“With the late football start, we’re still trying to figure out who we are,” Hofman said. “Hilmar and maybe Ripon are in the same situation.”

More than anyone else, the Knights’ chances will depend on Alger.

“I think we can definitely contend for a league title,” he said. “We have a lot of young guys. This is probably one of the fastest teams we’ve had. We have a lot of guys who can run.”