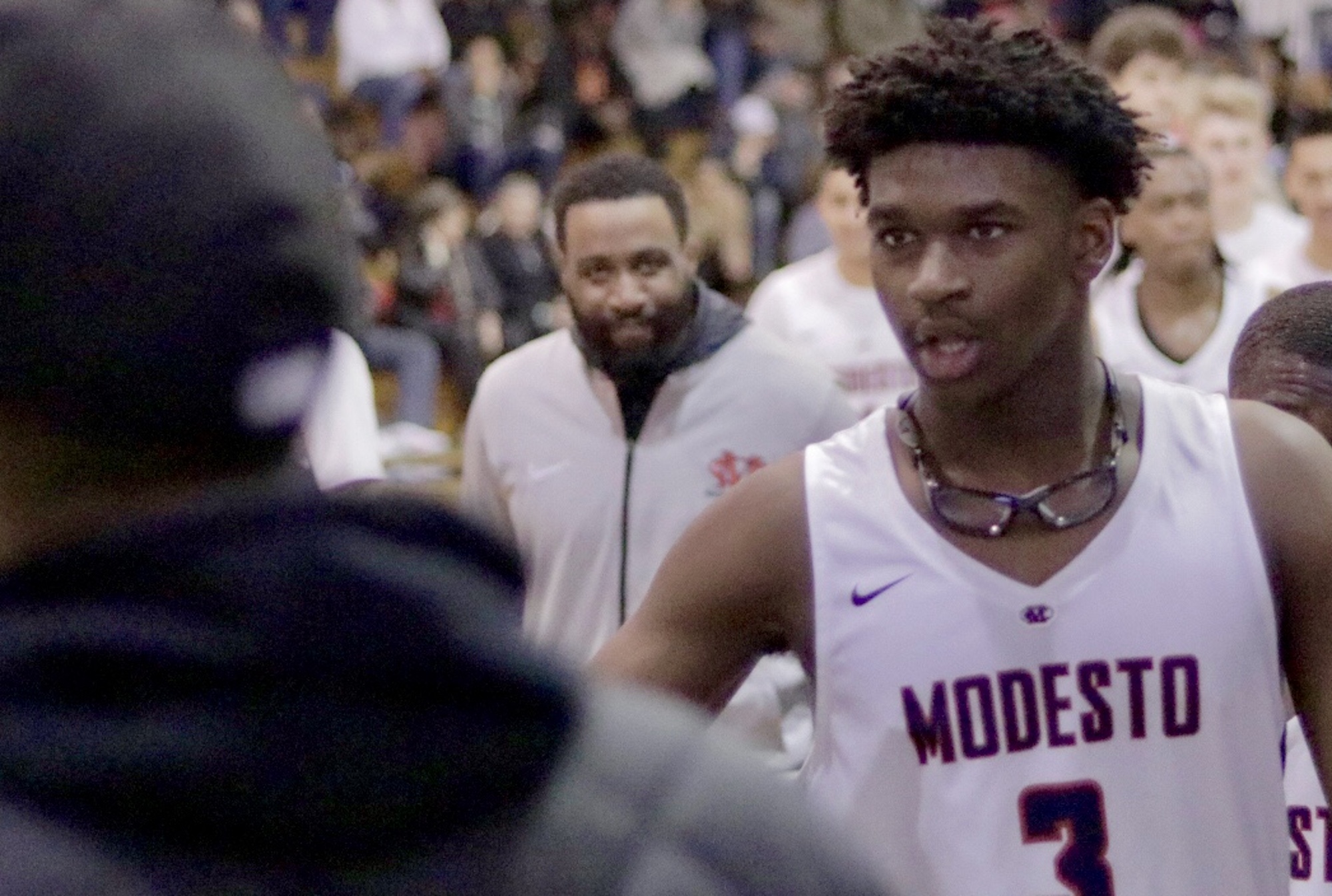 Modesto Christian's Aaron Murphy (right) had 19 points and 11 rebounds in a 68-50 victory over Folsom on Wednesday, Feb. 20, 2019, in the semifinal round of the Sac-Joaquin Section Division I tournament.

I know what you did last summer: MC star looking for payback in postseason.

Aaron Murphy is rarely without headphones. Even during a recent photoshoot on campus, the Modesto Christian High boys basketball player refused to take them off. Instead, he slid them back behind ears … and smiled … and then quickly slipped back into a vacuum.

Perhaps there is a strategic purpose to keeping the headphones at the ready. As the stakes grow and the spotlight brightens, Murphy, a sky-walking forward with a ticket to the next level, understands he’ll need something to drown out the noise.

Case in point: Wednesday’s 68-50 victory over second-second Folsom in the semifinal round of the Sac-Joaquin Section Division I tournament.

Going into the game, Murphy realized there would be chatter about his health and his game … his matchup on the block … and his ability to lead the Crusaders back to a section-record 20th blue banner.

Over the summer, the 6-foot-7 Murphy was outplayed by Folsom’s sophomore forward DeShawn Lynch, a 6-foot-8, 255-pound force. Lynch has blossomed into the Bulldogs' leading scorer this season.

“He gave me a run for my money,” said Murphy, whose senior season has been interrupted by ankle injuries and illness.

Murphy poured in a team-high 19 points, collected 11 rebounds and turned the tables on Lynch and the second-seeded Bulldogs in a runaway 68-50 victory. The win vaults the Crusaders into the Division I final for the third time in four years.

No. 3 Modesto Christian will face No. 1 Sheldon on Saturday evening at the Golden 1 Center, home to the NBA's Sacramento Kings, in downtown Sacramento.

Like Folsom, Sheldon is another summer-league opponent Murphy has been waiting to see again. Murphy said Sheldon was one team that got away from the Crusaders, who began the season ranked just behind the Huskies in state and section polls.

For nearly a calendar year, the two basketball powers have been linked in conversation. It began with Modesto Christian’s 60-56 victory over the Huskies in last year’s Division I final, a game highlighted by Cal Poly freshman Junior Ballard’s miraculous 35-foot shot to beat the shot-clock buzzer in the seconds.

“We’ve been waiting on this since the summer time,” Murphy said. “We didn’t get a chance to beat them in summer league. We haven’t been overlooking teams, but that’s been our top thing — we have to see them again, so we can get them this time. That’s what we’re going for. This Saturday is going to be a movie, I can promise you that.”

Don’t be surprised to find Murphy cast in a starring role. He was 9 of 12 from the floor on Wednesday, and his attacking style helped get to the line seven times. He was just 1 of 7 from the charity stripe, though.

“It’s been ridiculous,” Murphy said of the time he’s missed this season because of injuries and bouts with the flu. “I’ve finally pieced together all the pieces of my game. I work on my game a lot. It hasn’t showed itself this season, but for it come out now in the playoffs, for me to prove to players, coaches and all those watching me, you might have doubted me but I am what you think I am.

“I’m about to problematic, I guarantee that.”

Point guard Earv Knox had eight points and assists, while Michael Pearson finished with 17 points as the Crusaders played one of their best games of the season, Murphy said. Modesto Christian outscored Folsom 40-21 in the first and third quarters.

The UC Davis-bound Murphy, the Crusaders’ only four-year commit, was a catalyst. He said he drew motivation from his matchup, a reunion with Lynch.

“To come out the way I did and perform like I did, I’m a different person,” he said. “I was thinking about that during film (and) during practice: ‘I cannot let him do what he did last time.’ I’m different person and this is a different vibe. This is the playoffs.”