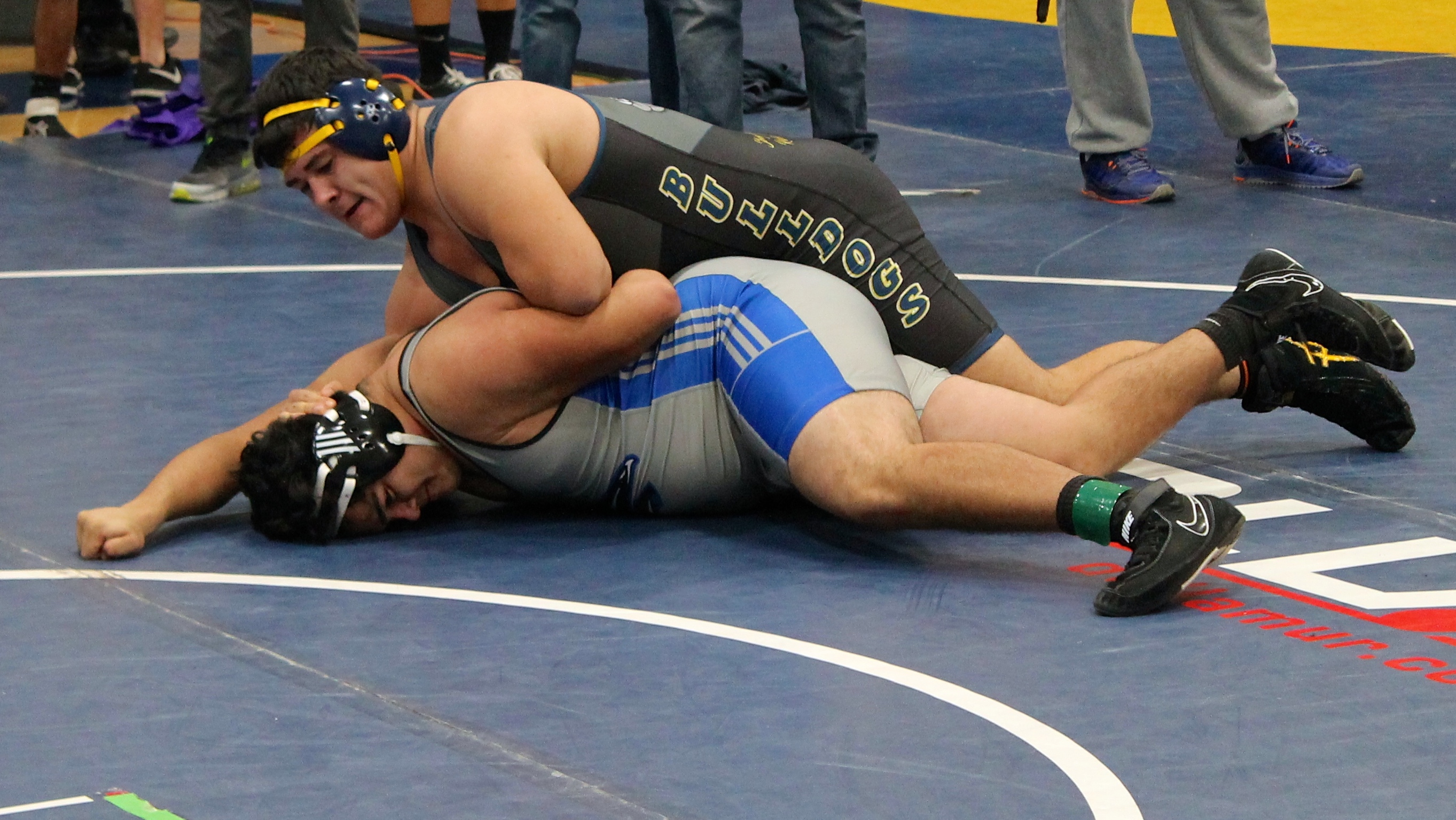 Turlock heavyweight Mike Jeffus, who finished fifth in the state last year, appears ready to make another run at the podium. Jeffus won his division at the Bulldog Classic.

'I want to be here.' Why hundreds of wrestlers descend on Escalon each year.

Year after year, Escalon High wrestling coach Derek Scott guides consistently good teams. Scott, now in his 18th year with the Cougars, is home-grown. He earned a third-place state medal during his years as an Escalon High student-athlete, went on to Cal State Bakersfield and eventually won national Greco Roman and freestyle titles.

“This is not a career move,” Scott said this week. “I want to be here.”

Escalon’s Lloyd Engel Invitational, named in memory of the longtime Escalon football coach and athletic director, is Scott’s annual labor of love. About 350 wrestlers from throughout the Sac-Joaquin Section will compete Friday and Saturday at Escalon, the home of this event for over three decades.

The Engel format is unique. Wrestlers collide in pool competition in each weight class on Friday. Those who are unbeaten are seeded into Pool A, one of several divisions, for Saturday. The finals are scheduled to begin Saturday at 3 p.m.

State rankings no doubt will be shuffled after this weekend. That’s because every No. 1-ranked wrestler, including Oakdale’s Brayden Abell (106) and Henry Porter (132), has arrived in Clovis for the Doc Buchanan Invitational, one of the nation’s most prestigious meets, Friday and Saturday (finals, 5 p.m.) at Clovis High. Thirty-three states will be represented at the Doc B, which awards cowboy hats to its champions. Many area wrestlers, including seven from Oakdale High, will take on the best. “If you’re a nobody, you can become a somebody here,” Oakdale coach Steve Strange said.

Turlock senior Mike Jeffus (8-1) is among the top heavyweights in the section. In fact, seven heavyweights from the area are ranked in the top 12. Jeffus, who placed fifth in the state and third in the section last year, defeated Levi Markey of Del Campo 4-2 in the finals of Turlock’s own Bulldog Classic. Turlock edged Folsom for team honors, thanks to champions Dezision Costa (106), William Giron (126), Adrian Heras (132) and Jeffus. Heras won all five matches via fall. Also winning were Alex Jimenez of Escalon (138), Zach Oberle of Calaveras (170), Donivan Giangregorio of Calaveras (182) and Elliot Houghten of Calaveras (195). The inaugural Bulldog Classic girls division featured a field of about 130, as mats were rolled out in the fieldhouse and the girls gym. Hailey Ward (101), Evelia Tovar (116) and Emily Ngo (131) claimed titles for Turlock. … Oakdale is ranked ninth in the state by The California Wrestler. … The Gordon Hay Invitational will be held Saturday at Calaveras. Houghten is 20-1.

Ron Agostini was recognized for regional and national awards as a sports writer and columnist during his 40-year career at The Modesto Bee. He retired in 2017.