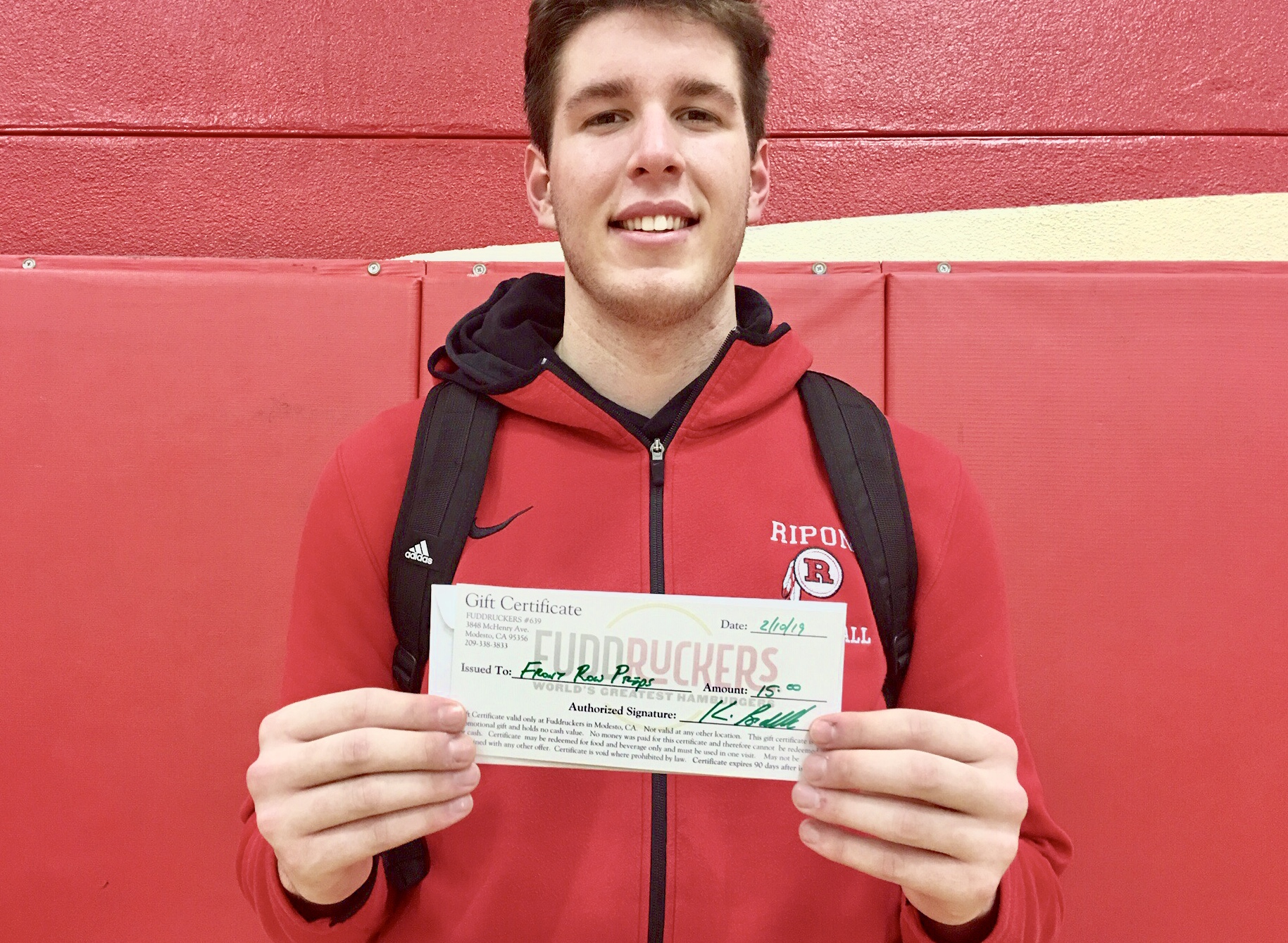 Ripon High center Vincent Olmo surpassed 1,000 career points during a 79-58 victory over Mountain House in the second round of the Sac-Joaquin Section Division IV playoffs on Friday, Feb. 15, 2019.

"I was ready for 'em:" Olmo outshines Mountain House's Maggard in Ripon win.

Olmo’s introduction during the first two minutes went thus: 3-footer over Maggard, layup over Maggard and a pivot move over Maggard for a 6-point-how-do-you-do.

“That was the plan. That’s always the plan,” Ripon coach Justin Graham said. “When you see a matchup like that, you think, ‘Let’s see if he can guard ‘em.’”

Olmo, his soft hands and deft work around the rim dictating the game’s terms, carved up Maggard and everyone around him for 28 points, 16 rebounds and five blocked shots. Ripon, which never trailed, sent its message 79-58 Friday night to reach the Sac-Joaquin Section Division 4 semifinals.

“I was ready for him, ready to play, ready to go,” said Olmo, who passed the 1,000-point mark in what’s becoming a remarkable three-year varsity career. “From the tip, you have to be ready in these big games.”

Ripon (19-11), the No.4 seed, will meet top-seeded Liberty Ranch on Wednesday night at Galt. It promises to be an emotional rematch. Liberty Ranch (28-2) prevailed at Ripon 62-60 on Dec. 4, a game decided in the final seconds.

“They’re the No. 1 seed for a reason. They’ve got Jalen Patterson, who can play like Stephen Curry,” Graham said. “He can shoot it from deep.”

Ripon collided with another player with a through-the-roof reputation in Maggard, Mountain House’s senior transfer from Antioch. His above-the-rim style lured Modesto Junior College football coach Rusty Stivers into the Ripon gym for a look-see. Maggard has been recruited as a swift and strong wide receiver.

He didn’t disappoint with 23 points and three dunks, including a breakaway whirlybird two-handed flush during the first half.

But Maggard’s occasional explosiveness was countered by a game-long dose of Olmo and teammates who knew how to find him.

Ripon, the Trans-Valley League champion, can confound opponents. The Indians drilled nine triples – four by Adam Wood – during thef irst half to lead 44-23. But in the second half, they hit zero triples while the Western Athletic Conference-winning Mustangs deployed a press and closed to within 53-48 late in the third quarter.

Graham reset his team during a timeout and supplied the simple answer – find the big guy. And Olmo delivered with a variety of inside moves to anchor an 11-0 run that blossomed into a 24-3 cannon blast.

Olmo was especially effective at the short corner,  which cleared the lane for scorers such as Troy Brogan (15 points) and Baz Cheema.

“I like that spot,” Olmo said. “It gives the guards a chance to drive and a dump-off option to me.”

Clearly, Ripon has found its groove after it averaged around 50 points for the first 20 games. Teams will try to speed up the Indians, only to discover they like to go, too.  They can also deal the trump card – Olmo.

“I think we just weren’t ready to play good basketball yet. Now we’re scoring the way we want,” Graham said.