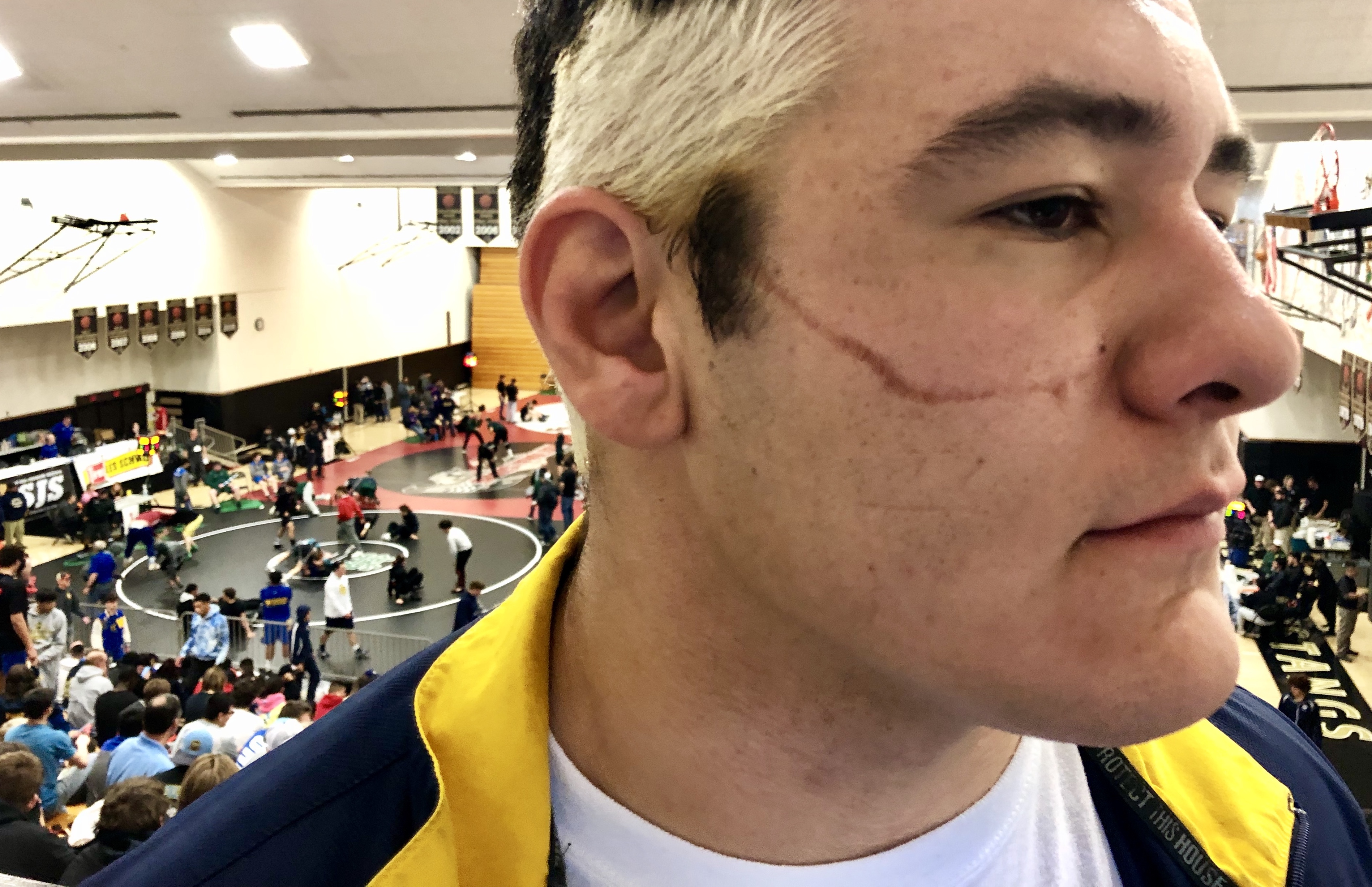 Turlock High senior heavyweight Michael Jeffus shows off a scar that travels the length of his right cheek, the result of riding his dirt bike into a barbed wire fence as a 9-year-old.

At 9, he nearly had his face ripped off by barbed wire. Today, he is state's No. 2 seed.

STOCKTON — A scar travels the length of Michael Jeffus’ right cheek, beginning near his nostril before disappearing into his hair line.

Over the years, it’s become a badge of honor for the Turlock High heavyweight, a qualifying mark as he steps onto the mat with the biggest, baddest, toughest wrestlers in the state over the next two weeks.

Gnarly scar withstanding, Jeffus, built like a brahma bull, belongs. He placed fifth at the CIF State Championships as a junior and has been ranked among the top heavies in the state all season along. He began Friday’s Sac-Joaquin Section Masters, the final stepping stone toward state, as one of the prohibitive favorites to ascend the podium.

“My focus is wrestling my best,” Jeffus said shortly after weigh-ins, peering over the crowded floor at Delta College’s Blanchard Gym.

“Win or lose a match, you have to keep going and make it to the point where you can make it to the next tournament. There are a lot of good wrestlers in my section — three of the top-four (heavyweights in the state) are here. If I did end up losing a match here, it wouldn’t be the end of the world. I could always come back in state, but …

“I’m looking forward to winning it.”

“Our road to the finals goes through the top guys,” Turlock coach Mike Contreras said. “He knows what is ahead of him.”

The three section competitors have traveled the region, trading blows late in tournaments as they jockey for position in a suddenly wide-open weight division. For the last four years, the heavyweight division belonged to Seth Nevills of Clovis, arguably the greatest high school wrestler in California state history.

Nevills, now a freshman at Penn State, won four CIF gold medals and completed his career with a record of 169-1. Over his last two years, Nevills won all of his matches by pin, including the 2017 state final in 59 seconds over Delhi’s Jesse Flores.

In other words, bonafide tough guys like Jeffus, who holds an offer from San Francisco State, had no chance.

Would you bet against a kid who nearly had his face ripped off by a barbed-wire fence and lived to smile about it?

When he was 9, Jeffus rode his dirt bike into a barbed-wire fence. The bike fish-tailed on a gravel road and Jeffus panicked, twisting on the accelerator and sending him careening into the fence. One of the state’s top heavyweights was clothes-lined. The razor-sharp barbs ripped off his helmet, dug into his cheek, and peeled the flesh back to his ear.

The wound required 71 stitches — 56 on the outside and 15 more beneath the skin. That’s how deep the barbed wire plunged.

For weeks, Jeffus wore a mask to protect the wound; to hide it from prying eyes. Today, he wears the scar proudly, like one of the many patches on his letterman jacket.

“If I didn’t have the scar it would be weird,” Jeffus said. "A lot of people have told me it makes me look like I’m really scary. I think it’s funny, because I’m not a guy who would do crazy stuff like that … like bar fights or anything people think when they see it.”

He was an All-Region offensive lineman in the fall for the Bulldogs, who captured the inaugural Central California Athletic League championship and won a Sac-Joaquin Section Division I playoff game.

This winter, he’s built momentum on the mat by winning the Tim Brown Memorial; placing second at the CIT Tournament in Morro Bay, where he lost to reigning Nevada state champion Ben Dooley; and being named to the all-tournament team at the Folsom Jailbreak Duals.

“He’s a kid that is tough as nails. He’s the strongest kid I’ve ever coached,” said Contreras, now in his 16th season at Turlock. “He’s also a straight-A student, so you don’t have to worry about him. He’s a beast.”

With the scar to prove it.