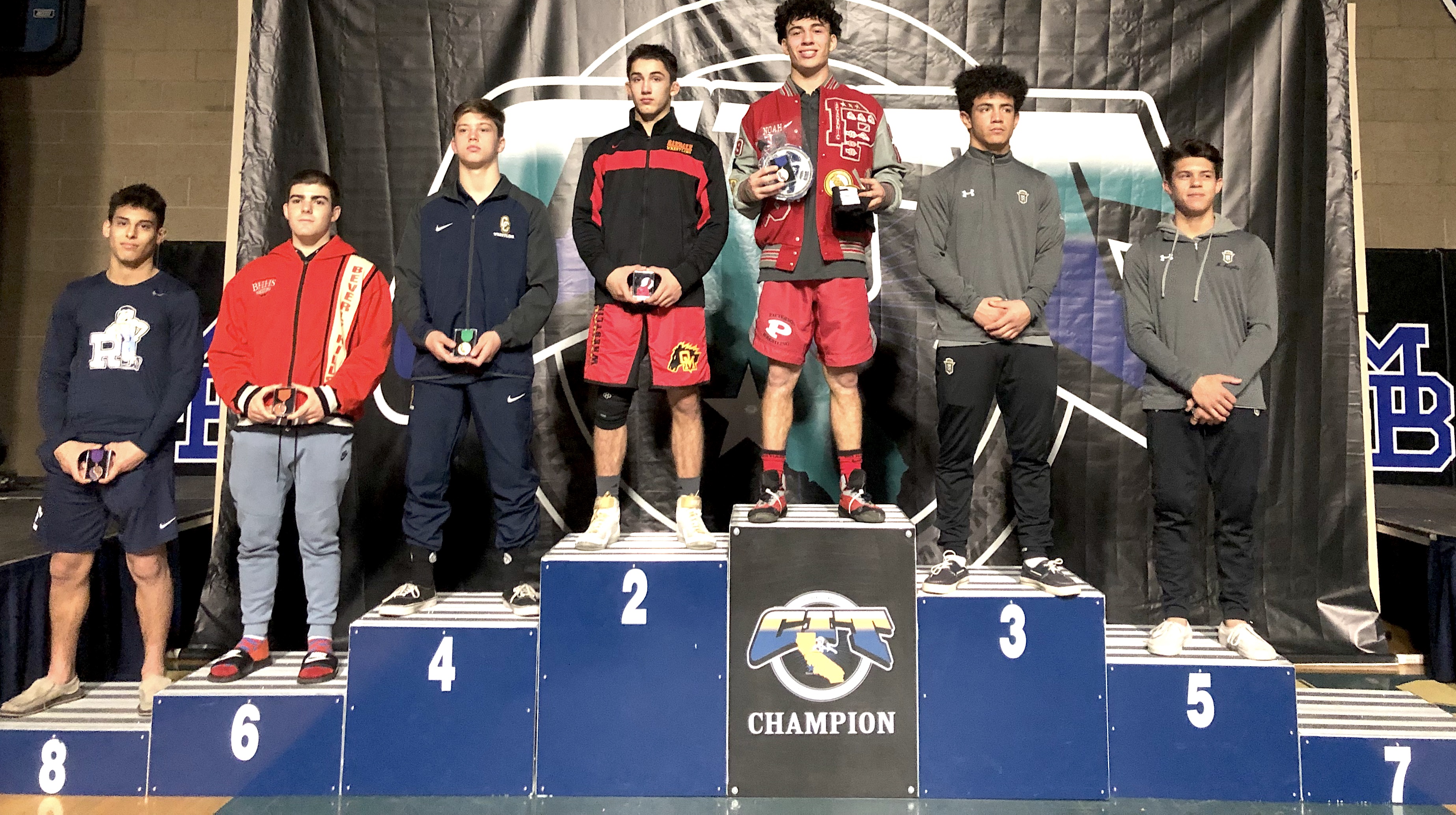 Patterson senior Noah Mirelez pinned Oakdale's Henry Porter, the Mustangs’ promising sophomore, for the 132-pound title at the California International Tournament, a victory which resonated up and down the state.

'It happened in 15 seconds.' How Patterson wrestler stunned state's No. 1.

Until the referee slapped his hand on the mat.

That sound triggered a celebration for Mirelez, Patterson coach Artie Rivera and their supporters last weekend at the 65th California Invitational Tournament at Morro Bay. Mirelez pinned Porter, the Mustangs’ promising sophomore, for the 132-pound title, a victory which resonated up and down the state.

In fact, Mirelez was named the Wrestler of the Week by The California Wrestler.

“Noah is a tough kid. He keeps pushing,” said Rivera, the Tigers’ second-year coach. “He knows he has a tough road ahead with a lot of kids like Porter out there.”

It wasn’t exactly easy for Mirelez against Porter, an athlete who’s already earned some national bona fides.  Porter led 5-2 in the third round when, after a scramble, Mirelez caught Porter in a cradle and put the Oakdale star on his back.

“It happened in a matter of 15 seconds or so,” Mirelez said. “It was crazy. I pointed to my team and kind of lost it for a minute.”

Mirelez (31-4) is not an overnight success. He’s a two-time qualifier for the CIF State Championships and is currently ranked seventh in the state and  second in the Sac-Joaquin Section at 132.  He won his first three matches at the Doc Buchanan at Clovis before he injury-defaulted to sixth and was fourth at 138 at the Zinkin Classic at Buchanan High.

Still, breaking through against Porter was a major breakthrough. Mirelez, a four-year wrestler for Patterson, has tried cross country and water polo over the years but always returns to the mat.

“Noah has been putting in the hard work and now it’s starting to show,” Rivera said. “His goal is get a medal (top eight) at state.”

Last year marked the first time Patterson sent two – Mirelez and fellow senior Mokbed Obeid – to state. But no one from Patterson ever has medaled at the state’s biggest meet.

“He (Mirelez) has tasted the blood in the water,” Rivera said. “Now he’s got to get on the podium.”

“If you’re ever going to go to a dual meet, or have never gone to one,” Vasconcellos said, “this is the one to go to.”

“This” is the annual grudge match between Turlock and Pitman, to be held Wednesday night at 7 o’clock at the Turlock gym. It’s always a spirited affair but the upcoming showdown carries huge stakes.

The Central California Athletic League title, along with the conference’s No. 1 seed at Saturday’s Section Team Duals at Stockton’s Lincoln High, will go to the winner. A raucous capacity crowd is expected as both teams boast unbeaten CCAL records.

“This dual is like a slightly  smaller vision of the Buchanan-Clovis meet every year. I think it’s the best dual meet in the area,” Vasconcellos said. “It’s always exciting and I think it’s going to be close.”

Jeffus is ranked third in the state.

Tubera is playing catch-up, and the rest of the state has taken notice.

The Pitman junior, ranked eighth in the state and No. 1 in the section, affirmed his status last weekend at Pitman’s own Rumble In The Jungle. He swept all four matches at 120 and won the meet’s coveted belt with an efficient 6-0 victory over talented sophomore Isaiah Schannep of Whitney. Tubera, who advanced through the bracket with a pair of pins and two decisions, controlled the final with single-leg takedowns in each round.

Tubera flashed potential by going 5-2 for a seventh-place medal at state and third at Masters as a freshman. He did not wrestle as a sophomore, however, due to “getting myself in trouble” and was home-schooled during his sophomore year.

“I got off-track,” Tubera admitted. “I didn’t get my eligibility back until Dec. 25. Nice Christmas present.”

Since then, Tubera (17-3) has earned titles at Aptos, Sonoma and the Rumble, including a sixth at the Doc B. Relentless when he’s on top, Tubera gains confidence with even a narrow lead.

“Izzy can get away from anyone and he can ride anyone,”Vasconcellos said. “He believes he can win with even one takedown.”

More than 600 athletes congregated at Pitman and competed on nine mats — six in the gym, two in the cafeteria and one in the team room.  Also annexing titles at the Rumble were Pitman’s Silveria (138) and Kendall LaRosa (160) and Bret Hate’s Kodiak Stephens (170). Clovis took home eight titles.

Chopper Mello, the Golden Valley coach for 22 seasons, earned his 100th conference victory at GV last week. His teams are 342-81 at Golden Valley entering this week, impressive numbers for one of the area’s most respected coaches. Mello, a graduate of Beyer High, launched his 25-year career at Manteca and Ripon before he came to Golden Valley. He’s also known as one of the public-address voices each year at Masters. “One of the things that keeps me going is my assistant coaches,” Mello said. “They do a lot of things behind the scenes that are very helpful.”…Whitney coach Vince Perez returned to a familiar neighborhood at the Rumble. He graduated from Pitman and earned two state medals with the Pride. Perez also served as a Pitman assistant coach. …Mirelez wasn’t the only area wrestler to make headlines at the CIT. Oakdale sophomore Brayden Abell, ranked third in the state at 106, and Giron of Turlock (113) won weight-class titles. Wrestlers from 63 schools and four sections were represented at Morro Bay. Oakdale placed a solid fourth in team standings.