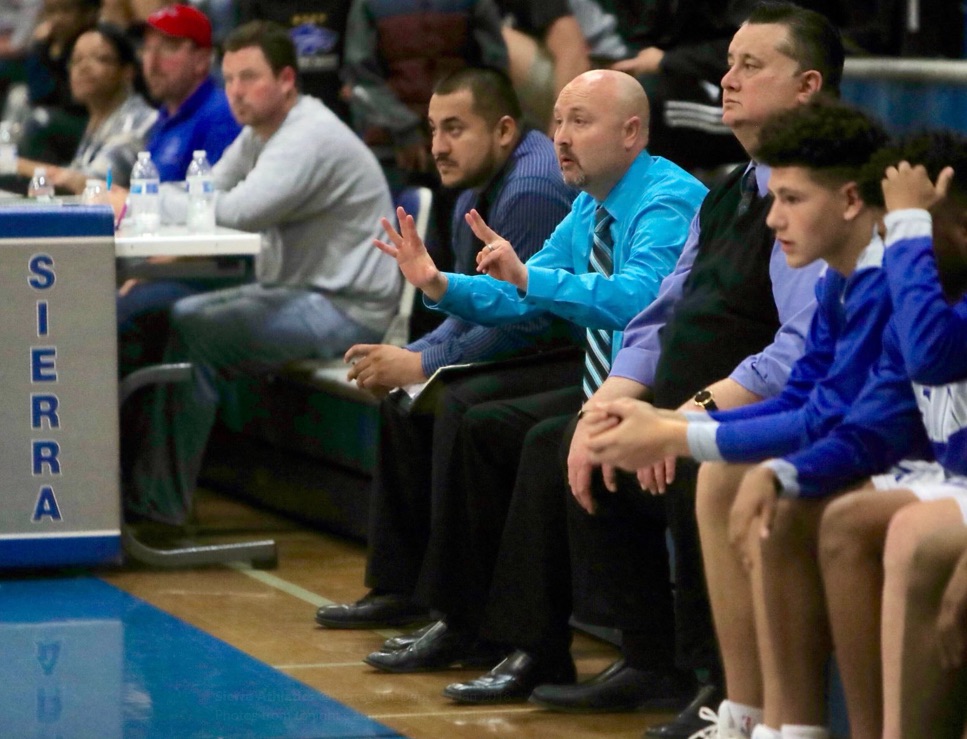 After 20 seasons, Scott Thomason (center) has resigned as the boys basketball coach at Sierra High School. Under Thomason's watch, the Timberwolves qualified for the postseason 17 times and won six Valley Oak League titles and a Sac-Joaquin Section crown.

'It hurts our area and our town.' Prolific hoops coach resigns after 20 seasons.

MANTECA — After experiencing little significant change in two decades, Sierra High School is looking for a third major varsity boys coach in as many years.

On Thursday, the school announced the resignation of former boys basketball coach Scott Thomason, news that has raised eyebrows around the southern half of the Sac-Joaquin Section.

Thomason is widely regarded as one of the top public-school coaches in the region, and his resume backs that up. In 20 seasons, his team's won six Valley Oak League championships and appeared in four Sac-Joaquin Section finals. He enjoyed his best season in 2014-15, when armed with Sacramento State’s Joshua Patton and Humboldt State’s Hunter Johnson, the VOL's co-MVPs, the Timberwolves won 31 games and lifted the program’s first Sac-Joaquin Section banner.

“I want to thank the administration and the staff at Sierra High School — it is truly the best school and I am blessed to be a part of the Sierra High School family,” Thomason said in the release. “I want to also thank the basketball players who have played for me the past 20 years. Their dedication and commitment to winning has truly exemplified the meaning of what a true team should be. They put their heart and soul everyday to make us a championship program. I want to thank all the coaches who worked so hard to making the students better basketball players and young men.”

He leaves the post with a “reputation of success through relentless defense, selfless play, mutual accountability and shared vision and commitment,” the press release said.

A seven-time VOL Coach of the Year, Thomason has a career record of 357-177. Sierra qualified for the postseason 17 times.

A coaching search will begin immediately.

“Coach Thomason went above and beyond in every aspect of coaching,” athletic director Andrew Lee said in the release. “It is rare to find a coach with this much passion and drive. Combine this with the educator’s mentality, sustain it for 20 years, and the result is an incredible impact on the school culture, the community, and the personal growth of so many young men. We could not be more thankful for everything coach Thomason has done for the students at Sierra High.”

Sierra, once the poster child for coaching stability, is looking to fill its third major boys’ coaching vacancy in three years, and if recent hires are any indication, Thomason’s successor could be a familiar name.

Last spring marked the final season in former baseball coach Jack Thomson’s hall-of-fame career. Thomason was the school’s only baseball coach until turning the reins over to his son, Travis Thomson, who is off to a fast start in his first season. The Timberwolves are 11-3-1 and very much in the race for the VOL title.

Now, the school looks to fill a basketball opening. Thomason, who has a wife (Amber) and two children (Dru and Mac), will remain on campus as a teacher, school officials confirmed. Still, his absence from the basketball scene will be felt.

“You knew his teams would be ready to go and they were going to be good and ready to compete," said Manteca coach Brett Lewis, now the longest-tenured coach in the VOL. "Me being able to coach against him for nine years has definitely made me a better coach. I know I’ve had to work my butt off to get my teams to compete with his. … It’s a hit to the league and the area. His teams are always good. It hurts our area and our town.”