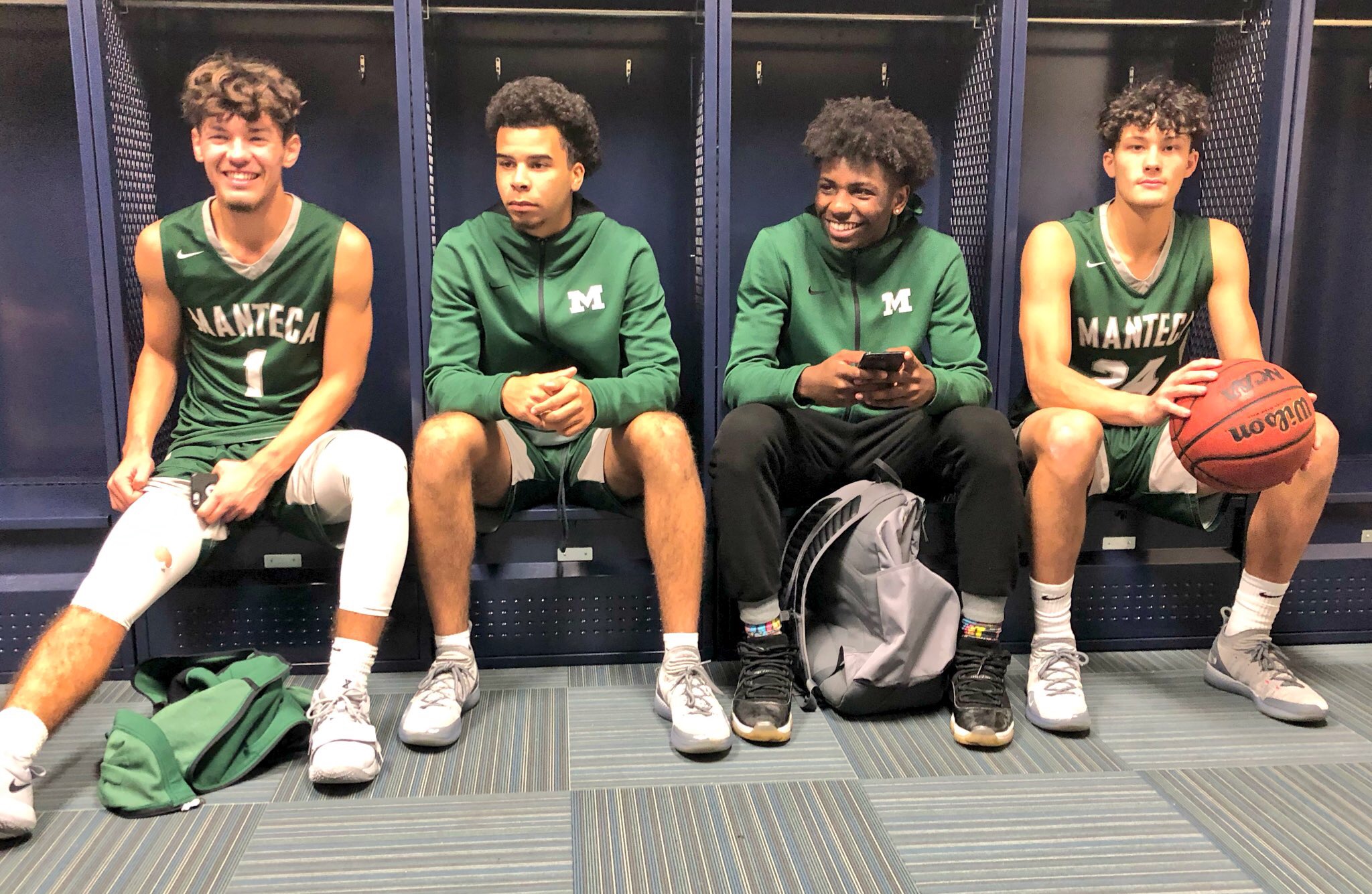 The Manteca High boys basketball team prepares for its opening round game at the Mark Gallo Invitational at Central Catholic High on Tuesday, Nov. 11, 2018. (James Burns)

Just scratching the surface: At 5-0, how Manteca has overcome its inexperience.

The scratch that stretches across Brett Lewis’ cheek has nothing to do with the struggle and challenges of putting together a basketball team.

That was a gift from his toddler, whose personality, it would seem, is hardwired to the high school sports calendar. The winter season is home to hoops, soccer and …

“He’s entered the wrestling phase,” said Lewis, Manteca’s fifth-year coach, “and he got me good.”

Adversity has come in many forms during the first few weeks of the season for Lewis, but as his unbeaten and inexperienced Buffaloes have shown, they can overcome.

Manteca (5-0) continued its impressive start on Tuesday with a come-from-behind victory over Newark Memorial in the opening game of the inaugural Mark Gallo Invitational at Central Catholic High School.

The Buffaloes were held scoreless for the first 3 minutes and trailed 10-4 after one quarter, but then clamped down defensively in a 41-38 win over the Bay Area power.

“It’s an exciting time of the year,” Lewis said. “Trying to find out what we are and who we are; find out what we need to be better in. That’s why we’re here today; trying to get our guys to buy in and understand it’s not marathon but a sprint.”

The Buffaloes also boast wins over West, Elk Grove, Lincoln and Gregori, which won its opening game at the Mark Gallo Invitational and will face Sonora Thursday.

Manteca draws another perennial section and state heavyweight in Thursday’s other quarterfinal game — Sacramento, which has won at least 20 games in 13 of the last 14 seasons. The Dragons throttled Patterson in the first round, 85-53, and their two losses have come to teams outside the section: Bullard of Fresno and Millennium of Goodyear, Ariz.

“We want to find out what we need get better at and where are weakness are mainly,” Lewis said. “I feel like this tournament will help us out with that. We believe in playing good teams. It’s the only way to get better.”

Lewis has embraced a thorny non-league schedule and a roster lined with youth and inexperience. His team is buoyed by just two returning starters off a team that lost more games (16) than it won (13) — Cedano and junior Jordan Burciaga.

On Tuesday afternoon, Lewis started promising sophomore Nick Bell and first-year varsity player Rashawn Ballard. While the Buffaloes struggled early, Lewis was pleased to see his team trust in the game plan and find ways to outwork a talented foe.

“We’re tougher than we thought we were,” Lewis said. “We’ve already battled through a little bit of adversity and got through it well. We’re young and that’s why I thought we weren’t as tough as we thought we were. That’s why having guys like Jorge and Jordan, returning guys, it’s been an easier transition for us. It’s nice to have those guys to lean on, because they know what I expect.”

Cedano is ready to lead.

He hopes his renewedcommitment to his craft serves as a shining example to the younger, less inexperienced players. An all-league wide receiver in the fall, Cedano snuck into the gym after practice to shoot. On Tuesday, he was the first one to arrive for a shoot-around and the last to leave.

Now in his final year, Cedano, who is averaging nearly 10 points per game for his career, understands the short lifespan of a high school athlete.

“I come in focused now. When I was younger, when I first got moved up, I used to not take things as seriously as I do now,” he said. “You have take advantage of every opportunity you get.”

Like his toddler, Lewis believes the baby Buffs are just scratching the surface.