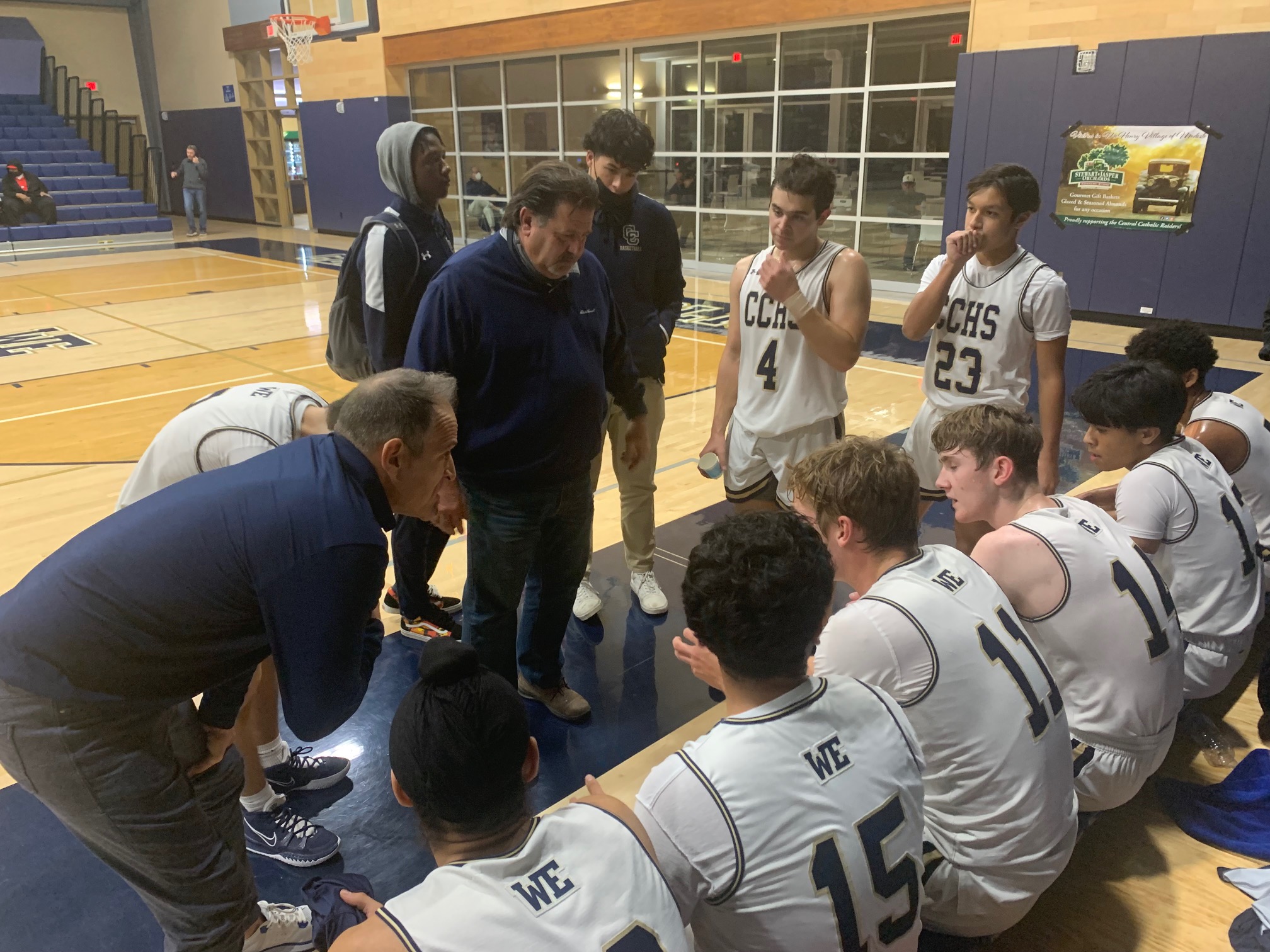 Central Catholic coach Mike Wilson speaks to his team during a timeout. The Raiders lost to Lincoln of Stockton and will play in the third-place game at the Mark Gallo Invitational.

Manteca will face Lincoln in the final at Gallo Invitational; CC plays for third

MODESTO – If you like your defense scrappy, physical, relentless and floor-burn tough, the Gallo Center at Central Catholic is the place Saturday night.

Lincoln of Stockton and Manteca, teams who’ve demonstrated that kind of pressure in the early season, will meet Saturday night at 8 o’clock for the championship of Central Catholic’s third Mark Gallo Invitational.

Manteca fought off a spirited comeback by previously unbeaten Sonora 44-39 to advance Friday night. Earlier, Lincoln used its full-court press to wear down the host Raiders 75-47.

Central Catholic and Sonora will vie for third place at 6:30, as the five-day, 32-game program wraps up.

That was the thin margin as these two old rivals – Sonora competed in the Valley Oak League for decades – displayed league-competition intensity. Manteca, coached by Jason Hitt, worked hard to reach the semifinal with wins over Downey and Atwater.

Justice “JT” Chase, a tenacious senior guard, finished with 12 points – eight in succession after Sonora drew even late in the third quarter – but also hounded Callahan Hanson, Sonora’s perimeter marksman. Hanson averages 21 points a game but rallied this night for 19, 13 in the fourth quarter.

The night before, the Wildcats pushed previously unbeaten Turlock into the consolation bracket 60-47. Turlock defeated Central Catholic last weekend in the finals of the Bulldogs’ Frank Godinez Invitational.

Chase, who stole the ball from Hanson to protect a two-point lead in the final minutes, looks forward to a major challenge from Lincoln.

“If we play good defense, run our stuff and listen to our coach, it’ll be a close game,” Chase said.

The Gallo quickly has become one of the area’s premier tuneups for league play next month. It overcame a transformer outage early in the week – two games had to be finished at Ripon Christian – and the 11th-hour dropping of one team.

Central Catholic covered the missing bracket piece with its own roster, which means the Raiders are a tired bunch. They then collided with a Lincoln team (4-1) that brandishes speed and a suffocating press. The Raiders were down 39-26 at halftime.

Myles Byrd, a long-limbed 6-7 senior guard and San Diego State commit, engineered the Trojans’ gradual pull-away with 24 points. Within about five seconds during the second quarter, the lefty connected on a triple and stole the ball for a layup and five quick points.

Four Trojans, including Anthony Moore with 15 points, reached double figures. Lincoln showed no lack of confidence, though it barely held on to beat Santa Cruz in the first round.

Central Catholic’s season will depend in part on fast progress from 6-5 sophomore Tyler Wentworth and junior guard Jaelen Nichols, who joined the team this week after the Raiders’ marathon football season. Turnovers against the press hurt the Raiders, though promising 6-5 sophomore Wesley Payne finished with 12 points.

“They (Lincoln) upped their pressure. We responded with ‘Let’s move faster,’ which is exactly what they wanted,” CC coach Mike Wilson said. “We haven’t seen that kind of pressure. It was a good lesson.”

“Payne never dogs it. As a coach, you love it,” Wilson praised. “He had to fight and struggle for everything he got.”