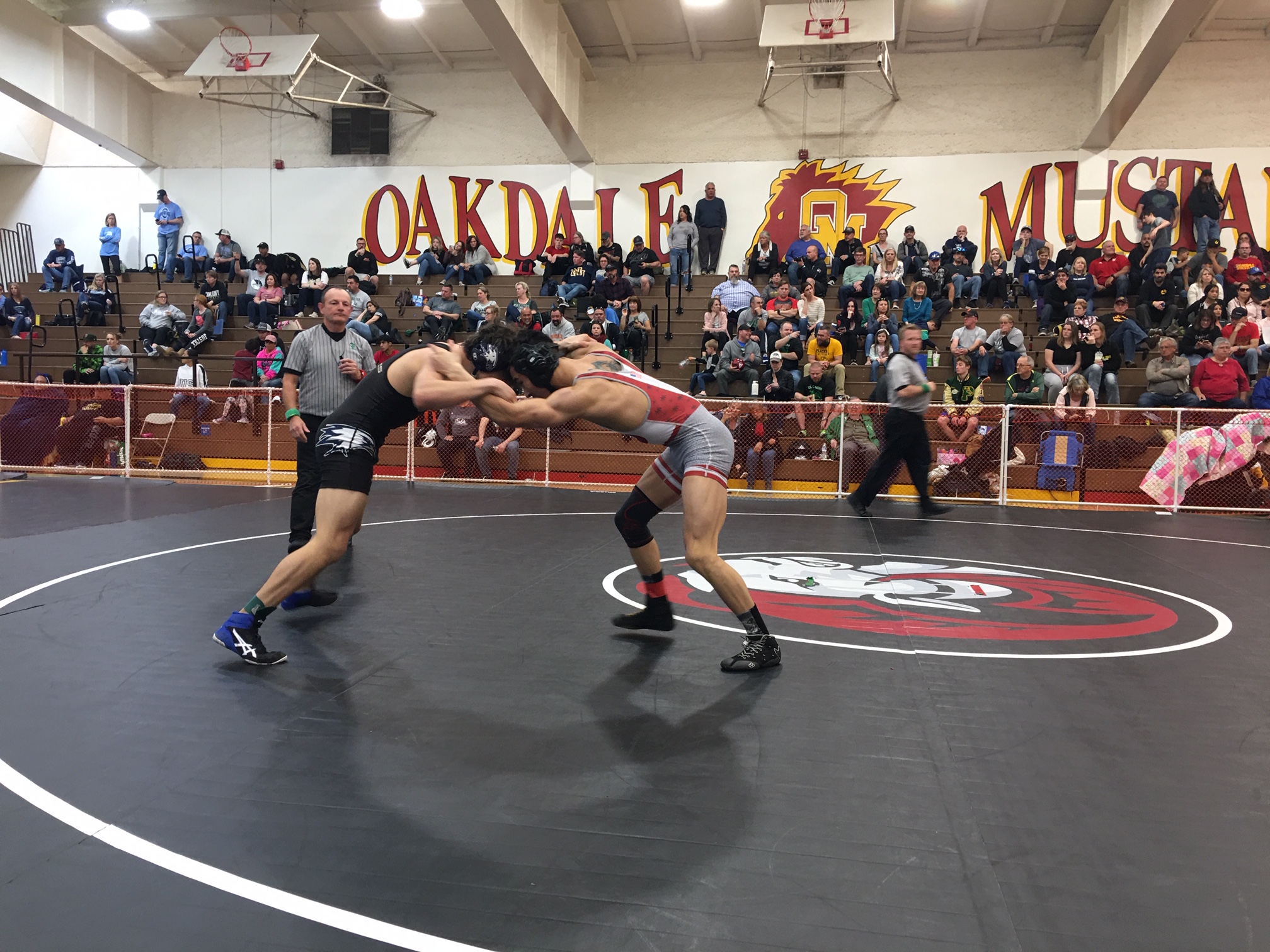 Wrestlers move on from Oakdale, one of the five sites for boys divisionals last weekend, to the Sac-Joaquin Section Masters Championships to be held Friday and Saturday at Stockton Arena.

The girls will compete alongside the boys Friday and Saturday at Stockton Arena, the event’s traditional venue. The boys Masters was switched to San Joaquin Delta last year due to conflicting dates.

“I think it will be fine,” Ripon coach Glen White said. “The girls’ brackets are only 16 against the boys’ 32, so it should work out.”

The goal for everyone, regardless of gender, is clear: A top-six finish in his or weight class, which clinches a trip to the state meet next week at Mechanics Bank Arena (formerly Rabobank Arena) in Bakersfield.

Boys section divisionals were held at five sites last weekend, while the girls were split between the South at Central Valley and the North at Natomas.

Oakdale, Vacaville and Pitman should contend for team honors.

Action at Masters begins both days at 9 a.m. The girls and boys first-place, third-place and fifth-place matches are scheduled for 3 p.m. on Saturday.

Here is a capsulized bracket-by-bracket look at the Masters:

101—Turlock senior Hailey Ward, third at State last year, seeks her fourth straight Masters title. She decisioned Gabrielle Medeiros of Tokay 4-0 in the final of last week’s South Regional at Central Valley. From the North comes Leila Sidhu of Del Oro, who placed fourth at Masters a year ago.

126—Madison Fonseca of Orland, last year’s Masters champ at 121, is favored. Naomi Cortez of Delhi won the South title via fall over Ulyette Curiel of Atwater, but Leah Brown of Whitney—fifth at the 2019 Masters—looms in the semis.

131—Emily Alderman of Bella Vista, a state medalist and Masters champion a year ago, will be hard to beat. Winning the South last week was Chavez freshman Taydem Khamjoi in a 5-3 decision over Anna Rodriguez of Lodi.

137—Central Catholic senior Faalia Martinez, who placed third at state a year ago for Oakdale, won all four matches by fall last week at the South.  Alana Ontiveros of Pitman, Martinez’s fourth victim last week, is slotted in the opposite bracket with Megan Stottsberry of Orland.

150—Pitman sophomore Lilly Freitas, the unbeaten state champion last year at 143s, might be the heaviest favorite this weekend. But there is state-ranked competition from the North in Lizah Hingano of Rio Linda and Michelle Kamyshin of River City. Kamyshin is the defending Masters champion who placed fifth at state.

160—Brook Logan of Live Oak is top-seeded from the North. Carla Martinez of Central Valley pleased the home crowd last week with an early takedown for a 2-0 win over Mountain House’s Ramona Jimenez in the South title match. Jimenez placed sixth at Masters last year.

189—Sierra senior Alexa Garcia, third at the state meet last year at 160, was a Masters runner-up last year. She defeated Klaudet Zevada of Los Banos 6-3 at the South final. The top threat from the North is Kailee Rivera of Wood.

235—The North brings talent in Annika Miles of Elk Grove and Nyla Thitphaneth of Orland. Cassidy Curtiss of Tokay won the south with a 9-0m ajor win over Yisela Vera-Rojas of Atwater.

113: Oakdale’s strength in the lightweights continues with junior Brayden Abell, who placed fourth in the state last year. Valley’s Salahdin Farukh is the answer to a trivia question: Name the wrestler who, due to a clerical error, went 0-3 at state? Logan Valledor of Vacaville and Michael Mallot of Union Mine could collide in second round.

138: Evan Ivaldi of Del Oro is favored but Ryan Alvarado of Vista del Lago awaits in quarterfinals. In the lower bracket, Brian Null of Cosumes Oaks is a threat.  Freshman Ammar Khan of Franklin of Elk Grove and Golden Valley senior Willie Ward-Williams could meet in second match.

152: Oakdale junior Seth Borba, ranked first in the section and eighth in the state, could match up against Pitman’s Isaiah Ontiveros in semifinals. Jed Campos of Del Oro won D-1.

160: Kendall LaRosa of Pitman, a Masters runner-up last year, is favored along with Hassan Khan of Franklin of Elk Grove. Watch for Brad Hagglund of Escalon, Jake Lewallen of Ponderosa, Erik Johnson of Vista del Lago and Marcus Curry of Pleasant Grove.

170: The North is dominant here with favorite Sean Myles of Oakmont (third at Masters last year) and contenders Ledger Petracek of Elk Grove, Gabe Guzman of Oak Ridge and Coulter Malone of Vacaville.

182: Bret Harte senior Kodiak Stephens, fifth at 170 at last year’s Masters, is top-ranked in the section. Threats in the other bracket include Colton Guthrie of Del Oro and Tal Malhi of Pitman.

195: Calaveras junior Donivan Giangregorio, a Masters runner-up at 182 last year, is ranked No. 1 in the section and No. 5 in the state. Kaden West of Oak Ridge will challenge.

220: Elk Grove senior Peter Ming will get most of the attention (he was a Masters runner-up at 195 and a state medalist last year). There is talent elsewhere in Pitman junior Juan Mora, Zach Brooks of Davis, Matt Kovaliskiy of Folsom and Eric Hayward of Vacaville.

285: Chris Island of Vacaville tops the section rankings and is No. 3 in the state. He appears to have an easier path than the state No. 5 Lucas Cook of Lincoln of Lincoln. Cook placed fourth at Masters last year. Emilio Gutierrez of Pitman is ranked fourth in the section.