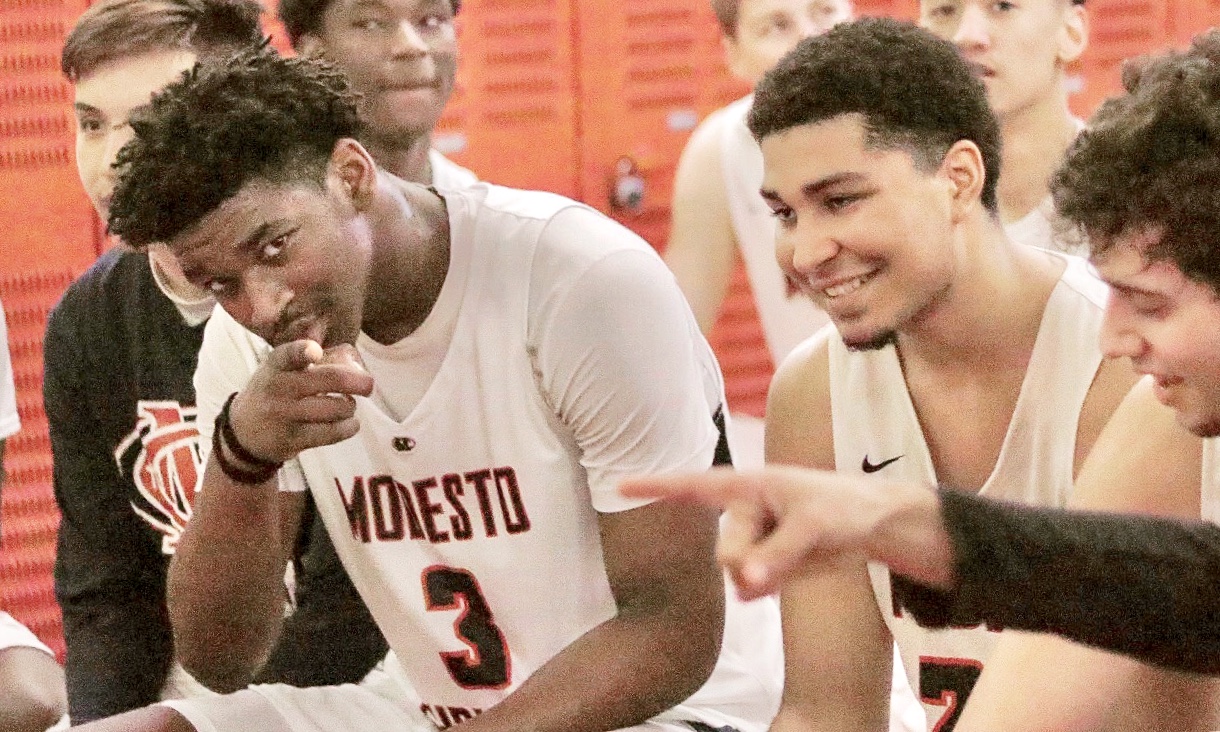 In the days leading up the Modesto Christian High’s section semifinal win at Folsom, Aaron Murphy ushered a warning for anyone who dared to cross his path in the post.

“Problematic” was the term he used.

One week later, with the Crusaders’ competing for glory in one of the toughest high school tournaments in the land, Murphy, a bespectacled forward ticketed for UC Davis in the fall, continued to be a thorn in the side of the opposition.

On Wednesday, he poked a hole in Archbishop Mitty’s season, powering a 66-48 victory in the opening round of the CIF State Northern California Open Division tournament.

“When I step out on the court, I know this is my last year and I’m expected to perform; I’m expected to go out there and give it my all every night,” Murphy said. “Now that the spotlight is on me I’m taking advantage of every opportunity I get. I have so much heart and so much love for this game, I just can’t let anybody take that from me.

Murphy finished with 16 points, eight rebounds, three steals and three assists for the Crusaders (26-7), a Sac-Joaquin Section Division I finalist and one of only two boys teams in the region left standing. Argonaut carries the torch for small schools in the Division V tournament.

FrontRowPreps.com's regular-season No. 1 Weston Ranch lost to De La Salle on the opposite side of the Open Division bracket.

“The guys were ready to play,” Modesto Christian coach Brice Fantazia said. “Obviously losing a section championship (to Sheldon) isn’t fun, but the guys had bigger goals all season and that’s winning the Open Division. We’ve got two more games to go and we’ve got to play even better than we did tonight. We got a monster coming up on Saturday.”

Modesto Christian travels to state No. 1 Salesian. The last time these two met was Dec. 22 at Valley Christian in San Jose, a game Salesian won in overtime, 61-56. It was also a game the Crusaders played without Murphy, who stayed home with the flu.

“If Aaron can play like he is now, it takes us to a whole other level,” Fantazia said.

It showed on Wednesday as Modesto Christian blitzed Mitty from the opening whistle. The fourth-seeded Crusaders opened the game on a 12-2 run, seized a 33-18 lead on Earv Knox’s buzzer-bearing halfcourt 3, and erased any hope with a 12-5 spurt to start the fourth.

Murphy was a consistent force. The 6-foot-8 super athlete has found his form after a season of struggle. He shuffled in and out of the lineup with ankle issues, and also missed time with the flu.

“It was (a rollercoaster), emotionally and physically,” Murphy said. “I was getting injured a lot. Mentally, I was thinking, ‘What if I come back and I’m not the same. What if come back and something is off about me.’ … When I get on the court I have to let go of all of that.”

As the postseason began, Murphy’s experience and freakish athletic ability has climbed to the surface. When healthy, Murphy soars alone, cleaning the glass at both ends of the floor while scoring in a multitude of ways.

Against Mitty, Murphy found his rhythm early, reaching double figures in the second quarter. He finished through a tangle of arms for a three-point play that made it 11-2. Later, Murphy beat the first quarter horn with a corner 3.

After that, everyone started to hit as the Crusaders turned a matchup of elite teams into a one-sided affair. Michael Pearson’s 3 stretched the lead to 26-13. After a timeout, Tsotne Tsardsidse knifed through the lane for a one-handed flush.

Fantazia thought Tsardsidse was lost for the season after rolling his ankle against Tracy, but tje 6-foot-8 Georgian international returned with limited minutes in the section final loss to Sheldon and again on Wednesday. Yet, his explosive finish speaks to the state of the Crusader basketball program — the two-time state champions are, as Murphy says, becoming “problematic” at the right time of the year.

“Everyone upped their game 100 percent,” Murphy said, “and we left it all out on the floor. I can see it in their eyes. I can see the sweat dripping off their jersey. That’s all heart.”

Pearson poured in a team-high 18 points and was 8 of 8 from the free-throw line. Alex Merkviladze had nine points and nine rebounds, while Devin Day was 4 of 8 from beyond the 3-point line for all 12 of his points.

Modesto Christian is seeking its first Northern California and CIF State championships since 2004.

“If we play like we did tonight,” Murphy said, “we can beat any team.”