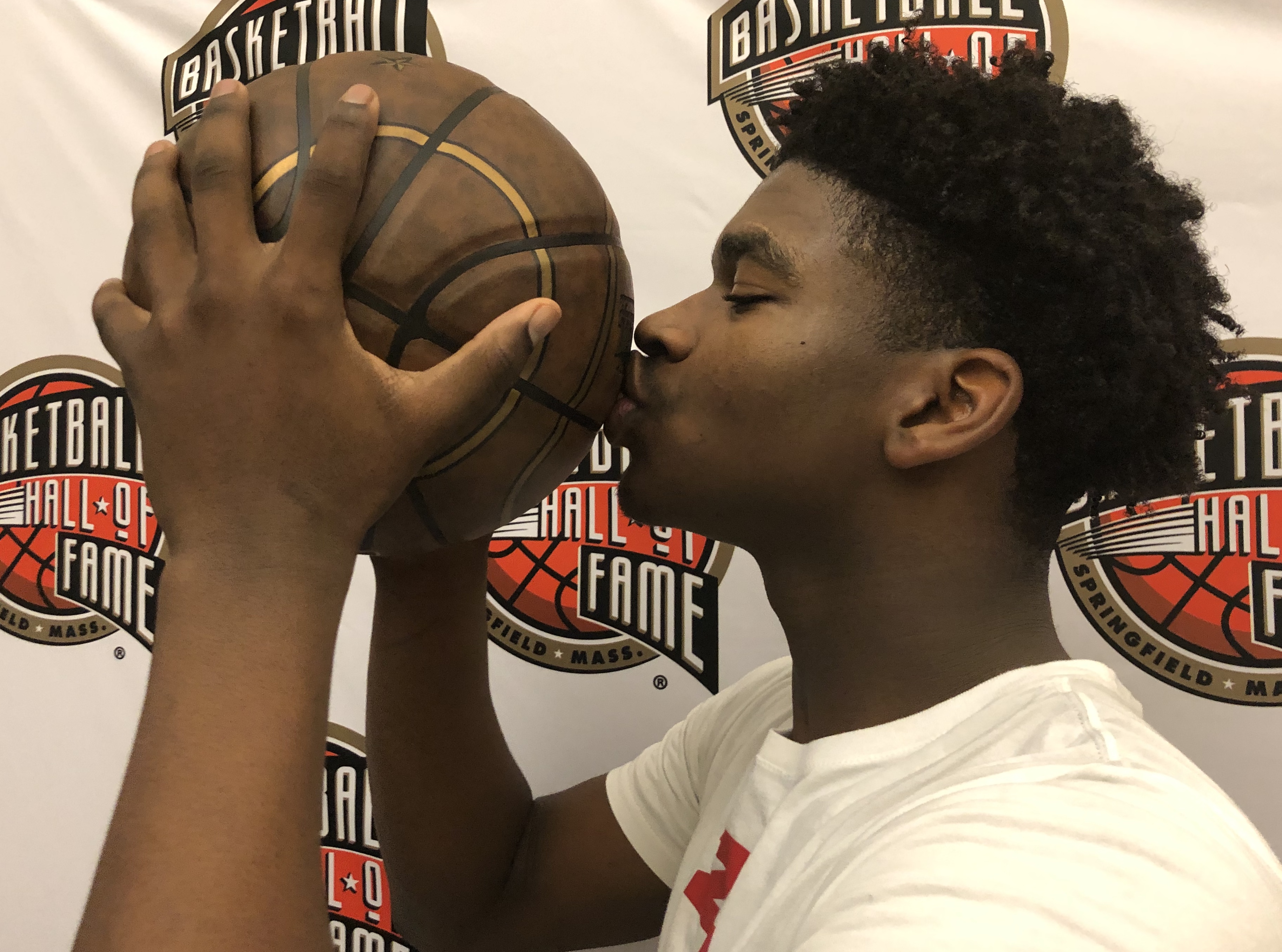 Modesto Christian forward Aaron Murphy plants a kiss on commemorative ball he was awarded for being the game MVP during a 70-43 victory over Perry (Gilbert, Ariz.) at the 2018 HoopHall West boys basketball invitational at Chaparral High School in Scottsdale, Ariz., on Saturday, Dec. 8, 2018.

Though, there was never any doubt in Murphy’s mind that he’d play.

“I wanted to come out and show the team that I’m still a leader,” said Murphy. “I can still get the job when you need me to."

Murphy scored 14 points and grabbed 10 rebounds in leading the Crusaders to a 70-47 victory over the Pumas in the final day of competition at the 2018 HoopHall West boys basketball invitational at Chaparral High School.

“He’s a tough kid,” said MC coach Brice Fantazia. “Today, he showed me a lot, just toughness. In his teammates eyes, I’m sure a lot of them were looking at him saying, ‘Hey, are you going to tough it out, are you going to play?’ There was no question about it. He woke up this morning and I asked him. He said, ‘I’m going.’

The Crusaders led 13-7 after one quarter and 27-15 at halftime, but the Pumas got back into the contest after 6-10 freshman Dylan Anderson showed his versatility with a dunk off the dribble and a three-pointer. Perry eventually cut the lead to 38-33 with 2:11 to play in the third quarter, but MC closed the stanza on a 7-0 run to extend its lead to 45-33 heading into the final quarter. Still, the Pumas wouldn’t go away and got to within eight midway though the fourth. But freshman Devin Day hit back-to-back three pointers — his third and fourth of the contest — to make it a 14-point advantage with 4:21 to play.

“i started off shooting with confidence,” said Day. “I’ve been playing with these guys for a long time with 16-U, so I was pretty comfortable from the beginning."

Fantazia knew that the 6-3 freshman could handle the stage.

“Devin’s a special kid, on and off the court,” said Fantazia. "He is probably the most confident kid I’ve ever seen that doesn’t have an ounce of cockiness, He is the nicest kid, you ask him how he did, he’s not going to tell you he hit 10 3’s, or anything like that, but he knows he’s a killer. And when he catches the ball, he doesn’t hesitate. There’s not too many freshman in the country that are going to come into a big event like this, not be scared of the lights, be ready to catch and shoot, against a huge team. They were closing out 6-9, 6-10 guys on him and it didn’t matter. He’s got a special future.”

Murphy had a couple of dunks in the final minutes to put an exclamation point on the victory. And for his performance, Murphy was awarded the Game MVP ball.

“I was so happy that I got this,” said Murphy, a 6-foot-7, 215-pound senior who has committed to play at UC Davis. “It’s been kind of rough this season to start, but I bounced back, got it together and to be here holding this ball right now is amazing. It’s a great feeling. I love it.”