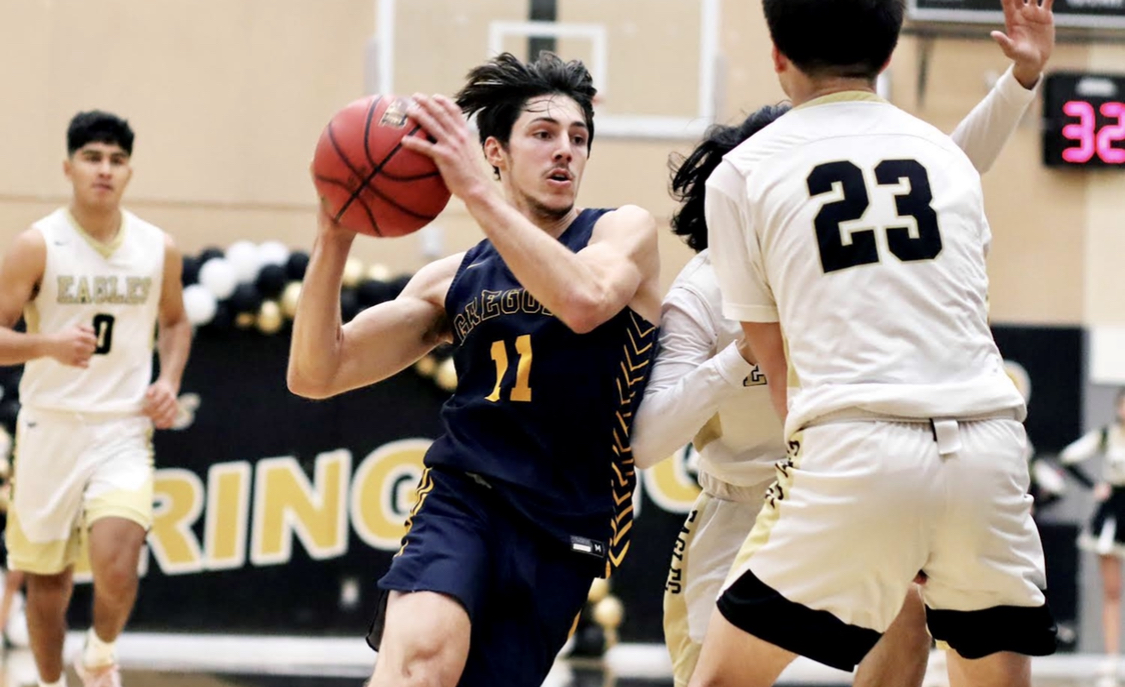 MODESTO – The Enochs High Eagles and Gregori Jaguars were reduced to backups and even JV callups Friday night. Then came Kyle Monk.

Monk, Gregori’s four-year varsity star, filled in all the COVID-induced gaps with 34 points and 10 rebounds. All of it was needed to hold off Enochs in overtime 63-56.

“We don’t need Kyle to be Superman,” Gregori coach Ryan Green said. “We just need him to be Kyle.”

The virus has taken a discouraging toll on both Central California Athletic League teams. Enochs (11-8, 0-2)  walked only one regular starter, senior guard Isaiah Toma, onto the court. Gregori (7-13, 2-2), minus several players including Monk’s running mate Kobe Nunes, was forced to promote a trio of sophomores off the junior varsity team.

Both teams showed off mass quantities of resourcefulness to get through a difficult night. Enochs, inspired by its screaming student section on winter homecoming, shook off a 25-8 deficit and led by four points early in the fourth quarter.

Five frantic lead-changes later, the Eagles’ lefty guard Marcus Purugganan (17 points) netted a clutch triple from the baseline with 14 seconds left. That sent it into overtime tied at 53.

Gregori, which shook off a loss to Enochs last month in the Modesto City Schools Classic, scored the first nine points of overtime. Monk’s dynamic up-and-under scoop triggered the pull-away, followed by a 3-pointer by Dylan Vuong and hoops by Paul Contreras and Landon Gutierrez.

Monk, 6-foot-2 and springloaded with hops, attacks with a variety of drives and shots from the perimeter. His confidence is a constant.  Midway through the fourth quarter as Enochs was poised to take control, Monk responded with three consecutive triples, the last one a stop-in-his-tracks pull-up. His 34 points were only a few baskets over his season average.

His major role, however, may have been to shepherd the wide-eyed sophomores.  And those JV players – Isiaah Feazell, Milik Gunn and Anthony Todd—combined for eight important points.

“They stepped up big on the road, homecoming. Welcome to varsity,” Gregori coach Ryan Green said. “Even if one guy takes all the shots, it’ll take all of us to keep him open and get him the ball.”

Green’s Jaguars won CCAL titles in 2019 and ’20 as Monk morphed into a major force. He’s been the go-to guy ever since he hit the game-winner in the Sac-Joaquin Section Tournament as a sophomore to beat Lincoln. But to survive a road game against a league rival, especially with dwindling manpower, brings its own sweetness.

“These are the games you dream of,” Monk said. “I just told them (the sophomores) to calm down and take a breath. This is not the last crazy environment they’re going to have.”

“The slow start made us exert a lot of energy to get back into it,” said Craig Bernardi, in his first full season as Enochs coach.  “In OT, I think we ran out of gas.”

“They (the Jaguars) have the best player in the league.”