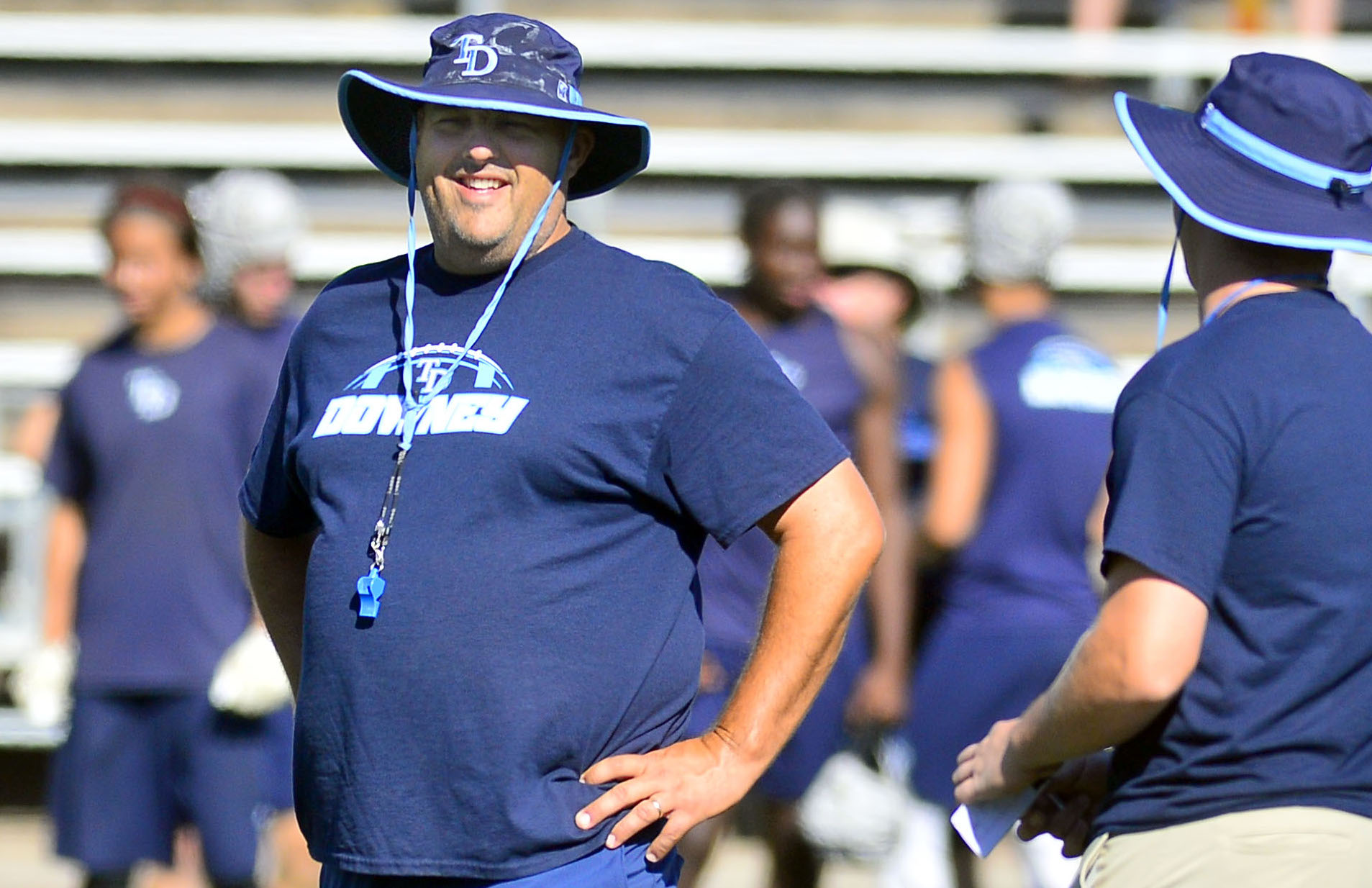 Downey coach Jeremy Plaa credits his defense's strong play to the schedule. The Knights have faced several types of offenses, forcing them to learn and grow.

Notes: Downey's 'Air Raid' moniker applies to both sides of the ball

The Knights (6-1, 2-0) often think the ball belongs to them more than their foe because, well, they often end up catching it. They’ve forced 19 turnovers, 13 via interceptions, as they’ve won six in a row.

Downey, under Plaa’s leadership for 15 seasons, built its image on a fast-moving passing attack and almost constant onside kicks after touchdowns.

The Knights can still throw. Quarterback Conner Stoddard passed for 225 yards and a touchdown as Downey handed Turlock its first Central California Athletic League loss and its first loss in any league conference game since 2015.

That said, there have been some changes. Downey controls the field position this season with Elijah Reyneveld, whose long kickoffs often force the opponent to drive it 80 yards.

Then there is that defense, fleet in the secondary and strong up-front. Since its lopsided loss at Manteca in Week Zero, it has been aggressive.

“On top of the tackle, we’re trying to strip the ball,” senior defensive end and captain Tyler Sanchez said. “The secondary is stepping up and getting to the ball where it is thrown.”

The Downey defense, overpowered by Turlock in recent years, flexed its muscles this time. In fact, the Knights pitched a shutout in the second half and limited Turlock to only 52 yards after halftime.

Spotlight: How a backup RB carried Davis to its 7th straight win

“It’s continual improvement more than anything else,” said Plaa, who earned his first-ever win over the Bulldogs. “The teams we’ve played had a variety of schemes and gave us a chance to work on everything. We’re just getting better.”

“Shutting down their running game was really crucial. It forced them to be more one-dimensional,” Plaa said. “In the past when they’ve beaten us, they beat us because they were able to run the ball on us.”

NOTES – Downey has not played on natural grass nor has it been on the road since its opener. That will change Friday night against Enochs (4-2, 0-2). The Eagles were slowed by injuries and illnesses in recent weeks. Coach Tracey Traub expects his team to be more healthy for Downey. …Modesto Mayor Sue Zwahlen attended the QB Club lunch. …

Grace Davis (7-0, 4-0 in the Western Athletic League), is a heavy favorite Friday night against Beyer (0-7, 0-4) for the Patriots’ homecoming. The Spartans’ Daniel Ramos rushed for 116 yards and a touchdown last week as Davis overcame three second-half turnovers to hand Lathrop (5-2, 3-1) its first league loss 25-13. …

Modesto (2-5, 0-2 in the CCAL) tested Gregori (4-3, 2-0) more than the 43-15 final score. The Panthers trailed only 21-15 with eight minutes left before turnovers stretched the margin. “We’re seeing the growth we want to see from our younger guys,” said Modesto coach Dylan Miller, whose team includes only eight seniors. … COVID restrictions forced Johansen (1-6, 0-3) to the sideline last week against Los Banos, and this week’s game against Lathrop also has been scrapped. The Vikings hope to face Davis on Oct. 22. …Big Valley Christian (1-6) celebrates Senior Night with its Central California Athletic Alliance League opener Friday night against Millennium (3-3). …

Modesto Junior College’s 11-0 1980 team, which was ranked No. 1 in the nation at season’s end, will be honored at halftime of Saturday night’s homecoming game against West Hills. It’s also the Valley Conference opener for the Pirates (3-2), who were idle last week. … The Manteca football community lost a passionate disciple in Danny Coffman, who died last week. He was 66. Coffman, a standout for East Union’s first winning football team (1973), was a JV coach and also coached freshman girls basketball for EU following his retirement. He served as manager for two Save Mart stores in Modesto for 38 years.