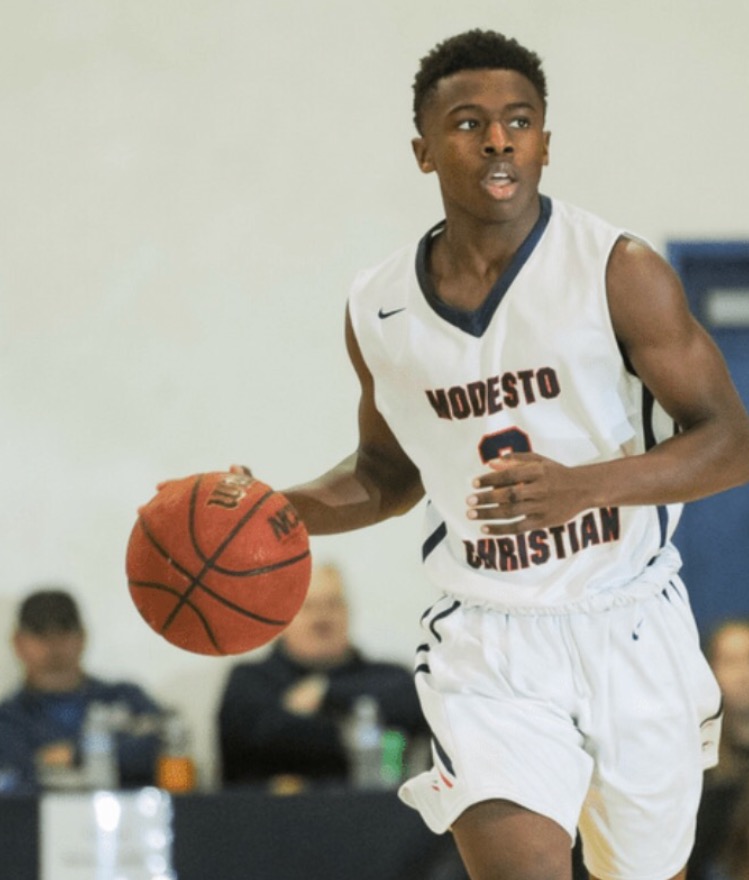 Pearson's purpose: 'I want to the best point guard in the state'

Mike Pearson Jr. doesn’t hide from the pressure or the spotlight. His goal this summer is lofty. His confidence impervious to doubt.

The Modesto Christian High junior wants to be the very best point guard in the state — from Sierra Canyon to Sheldon — a player so dynamic that Division I coaches would be foolish not to frequent the gym at the north end of Sisk Road.

Don’t look now, but after missing the first three months of the summer season with a fractured ankle, Modesto Christian coach Brice Fantazia is happy to report that Pearson is well on his way.

“He’s a natural leader,” said Fantazia, whose career coincides with Pearson’s brilliant three-year run at the varsity level. “Starting as a point guard since a freshman? At Modesto Christian, that’s rare. He has confidence that a lot of kids his age don’t have. He’s our leader. He got hurt, but there are a lot of colleges calling.”

A high-achiever in the classroom, Pearson has been courted by some of the top academic institutions on the West Coast, including Stanford University, Santa Clara University, UC San Diego and UC Davis, Seattle University and the University of Montana. He has yet to be offered, but Pearson, who runs with the Chuck Hayes Basketball (CHB)16s, hopes his recruitment intensifies with the final stops of the AAU season.

The CHB 16s will compete at the Adidas Summer of Champions in Orange County from July 18-22, the Big Foot Classic in Las Vegas from July 25-29, and the Cali Hoop Invitational in Fresno on Aug. 2-3.

“My goal is to play with my teammates and make them better, win a couple of games and get an offer,” said Pearson, an all-Modesto Metro Conference selection as a freshman and a catalyst in the Crusaders’ Division-I section title run last winter. “I want to go out there and have fun.”

The first three months of the summer season were anything but fun for Pearson, who injured his left foot for the second time in nearly three years. For a player with virtually unmatched speed and agility, three months in a walking boot was torture.

Pearson suffered a stress fracture on his left ankle while back pedaling during a tournament in April. It was the same foot he injured as a freshman, though Pearson’s physician said the injuries were unrelated. He avoided a cast, swapping his sneaker for a walking boot, and was instructed to get lots of rest and ice.

“I didn’t get too down on myself, because I knew I’d be back,” Pearson said. “I didn’t give up and say, ‘My AAU season is over.’ I didn’t give up. I was going to play even if I had a nagging pain. This is a big summer for me. College coaches are recruiting me and I want to show them what I’m capable of.”

Now that he’s fully healthy, Pearson’s stock is on the rise. He’s resumed regular basketball workouts, which is a maddening schedule built around practice, shooting sessions and weight training. Pearson is the living representation of basketball’s oldest cliche: First one in the gym, last one to leave.

“The work he puts, other than what he does with us, he’s always working on his game,” Fantazia said recently as Pearson finished another evening workout. “He comes in every night and gets up 500 to 1,000 shots.”

Pearson has solved the equation: If he commits to becoming the very best he can be on and off the hardwood success will follow.

“I love the results,” Pearson said. “My dad (Modesto Christian assistant Mike Pearson Sr.) has always told me that there is somebody always working harder than you, so you have to put in twice the work. I want to the best point guard in the state. That’s motivation for me.”