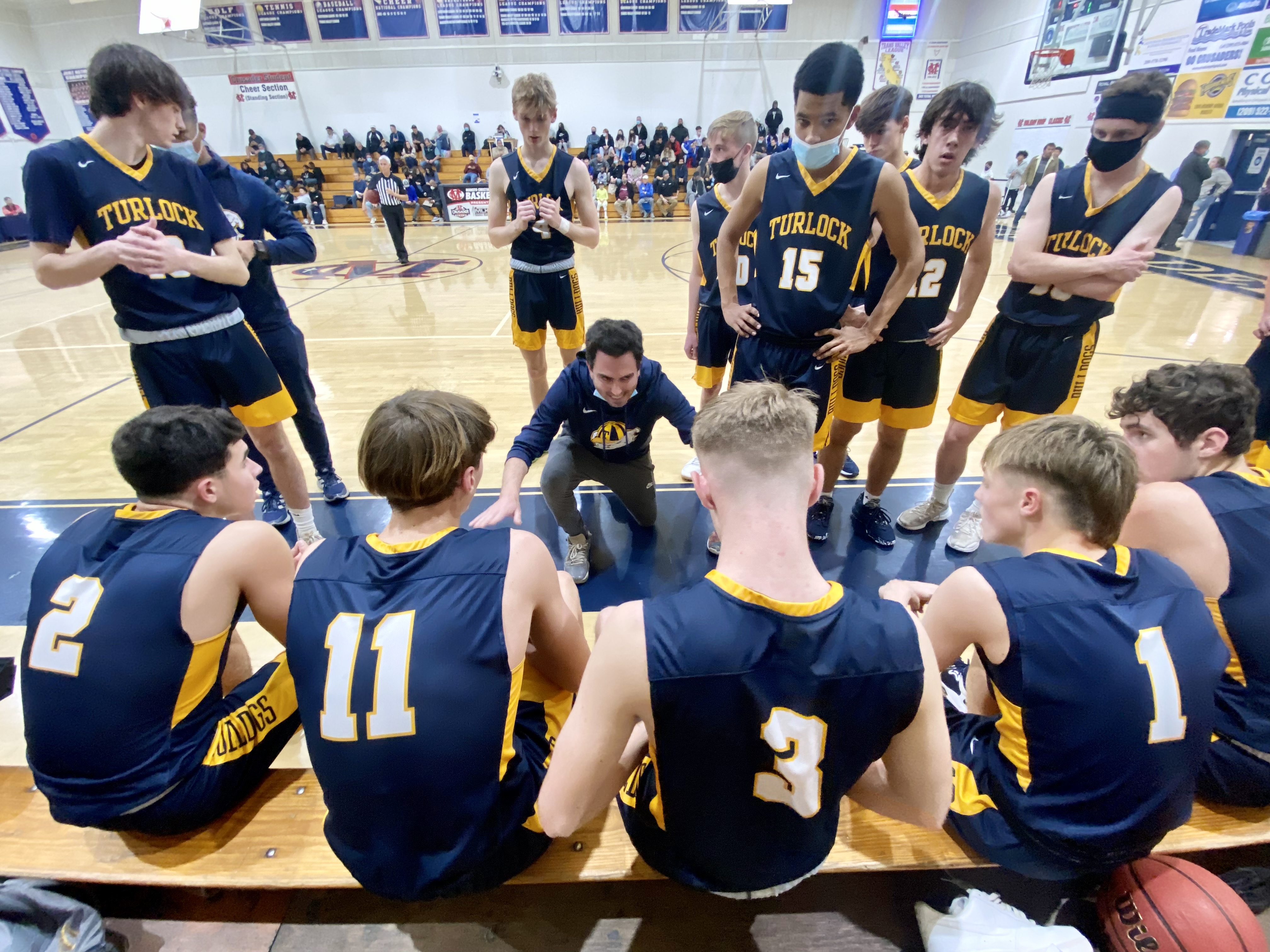 Nick Nathanson has played and coached basketball in the two largest markets in the country and that experience has led him to Turlock, of all places, where he's attempting to revive a sleeping giant.

So far, the results have been favorable.

Turlock High is off to a fast start, winning nine of its first 12 games, including the Frank Godinez Tournament title. Under Nathanson, the Bulldogs, one of the region's largest schools in terms of student population, have emphasized a team-first approach at both ends of the floor. They share the ball on offense, switch and help on defense, and they seemingly feature a new player nightly, whether it's 6-foot-6 post Gavin Cox, Godinez tournament MVP Daniel Malagon, or junior Jed Ladine, who netted a team-high 21 points in his Holiday Hoop debut on Monday.

Nathanson, who was raised among NBA stars in the Mid-Atlantic Prep League and coached varsity at Foshay and Chavez high schools in the Los Angeles area, believes the Bulldogs have the pieces to become an elite public-school program in the central valley. To do so, though, Turlock will need to commit to Nathanson's system and style. For nearly two decades, Turlock leaned on one man, listened to one voice: former coach Doug Cornfoot, who retired after the spring season. Though the Bulldogs won three conference titles and dominated their in-town rival Pitman under Cornfoot, Turlock was just 129-128 in his final 10 seasons.

"Doing my research and watching film, I saw that they had a lot of talent but they've underachieved," Nathanson said. "What my eyes told me is they could be a lot better. I took a leap of faith and took this position, and here I am."

Maybe it's the competitor in him, the same spirit that carried him in high school battles with future NBA professionals Luol Deng and Charlie Villanueva, but Nathanson hasn't shied away from competition in Year One. Turlock locked horns with Modesto Christian in the Sac-Joaquin Section's Foundation Games, drawing praise from Crusader coach Brice Fantazia, and opened the 21st annual Holiday Hoop Classic on Monday evening against Durango, the third-ranked team in Nevada. The Bulldogs hung tough for a half with the Blazers, but couldn't keep pace in a loss. Turlock will take on Weston Ranch on Tuesday in the loser's bracket at 10 a.m.

FrontRowPreps.com sat down with Nathanson to discuss his basketball journey, the pressure in replacing a local legend at Turlock High and the reason behind Turlock's fast start.

FRP: Before we talk about the future of Turlock basketball, let's chat about where you've been.

NN: I played high school ball at Peddie School in Princeton, New Jersey. I don't know how much you know about basketball back east, but we played in a league against Blair Academy and others. Blair had (future NBA lottery picks) Luol Deng and Charlie Villanueva ... on the same team. The coach at St. Benedict's is now the coach at IMG Academy. It was eye-opening. I was recruited to play there from my local community in New York. I was a big fish in a small pond. I was excited to play there, and when I got there, I realized I wasn't that good. It was eye-opening but also a great experience because I got to play against the best players in the country and hone my skills.

FRP: Do you continue to draw on that experience?

NN: What I learned is that there is always a bigger fish, (but) the biggest thing that I learned and continue to try to stress is that details really matter. Details make the difference between good teams and a great team. That's been my biggest takeaway from my experience (at Peddie School). Once you get to a certain level, where you're playing or coaching at an elite level, those small details really make the difference.

NN: It's always tough to inherit a team that is mostly seniors, because they're used to doing things a certain way. I sub very differently than Cornfoot did. I run a seven- or eight-man rotation, and I think Doug got more guys in. ... Overall, though, the community has been supportive. He's a legend in Turlock and I'm just trying to focus on creating my own identity. My goal is to make Turlock a powerhouse and make it more competitive than they have been the last 10 years. I'm just trying to get the most out of what we have. This year, we have quite a bit of talent and that's why we've had some success.

FRP: What is the reason for that success? What screws did you come in and tighten immediately?

NN: Coach Kevin Kelsey coached for 35 years (at Pacific Christian High School); he was a mentor for me and taught me his defense. When I first joined Pacifica Christian, we were Division VI and when I left we were D-IV, and now they're D-III. A large part of that success was because of the defense we ran. I would see his team beat considerably better teams with his defense. It is a man-zone hybrid; really a man defense with zone principles. It is a brilliant defense if run properly. My goal has been to focus on defense with this group. We're allowing an average of 45 points per game (entering Monday's game), which is pretty good, and we continue to get better on that end. Defense has been the biggest catalyst toward the success we've had this season.

Everyone is pre-conditioned to think, "Well, my man didn't score." That's what I'm trying to get them out of. The goal of this defense is to not let anything inside and if teams beat us, they're going to have to make 10 to 15 contested 3s a game. It's a constant battle to remind them that we're playing team defense here.