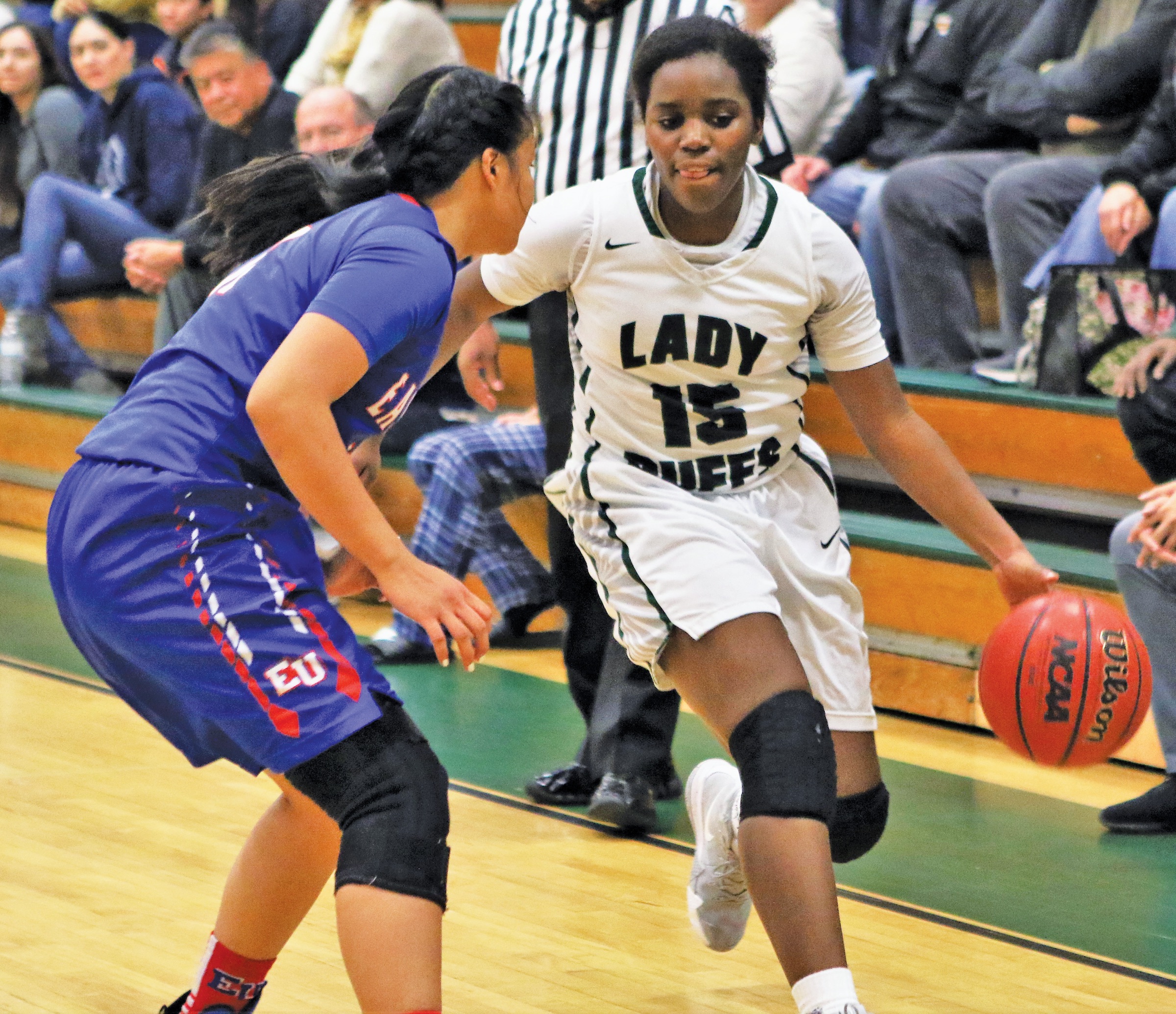 Manteca's Jayda Jackson (15) has impressed in the first two months, helping guide the Buffaloes to the top of the large-school poll. (Sean Kahler)

1. Manteca (13-6) — Junior Jayda Jackson and sophomore Kyaria Jacobs led the way with 14.7 and 11.6 points, respectively, per game. And here’s the scary thing about the Buffaloes: they have just two seniors on the entire roster, and neither averages more than two points per game. Manteca bolsters its claim to the top spot with wins against Division I heavyweights Turlock and Pitman of Central California Athletic League. The Buffs will collide with Kimball (15-3, 4-0) on Wednesday for the top spot in the valley Oak League.

3. Atwater (13-6) — The Falcons have an impressive blowout victory over Modesto Christian, the standard by which all girls teams are measured in these parts. But the Falcons dropped a Central California Conference game to El Capitan last week, giving the Gauchos the early advantage in the race for the CCC crown. Awater is led by identical twins Kelsey and Lexi Valencia. Kelsey averaged 18 points, 7.2 rebounds, 5.0 assists and 5.3 steals per game, while Lexi contributes 15.3 points, 4 rebounds, 5.3 assists and 4.3 steals per contest.

(t) 5. Turlock (12-6)  and Pitman (10-7) — Turlock and Pitman have six.common opponents this season in No. 1 (large) Manteca, No. 1 (small) Sonora, Lincoln, Edison, Patterson and Gregori. Turlock beat Sonora 61-60, while Pitman Los to the Wildcats 67-57. Both lost to Lincoln, with Turlock falling 43-38 in a close contest while Pitman was absolutely hammered by the Trojans 55-14. We'll wait until the teams meet on Jan. 22 in CCAL action to determine which one gets the No. 5 spot all to itself.

1. Sonora (10-5) — The Wildcats scored an impressive win over Large School No. 4 Pitman and has narrow losses to No. 3 Turlock and bubble team Enochs, all Division I schools, and a one-point overtime loss to No. 4 Ripon.

3. Mariposa (15-1) — The lone blemish on the Grizzlies record (15-1) this season is a head-scratching loss to a down Merced team, at home. Other than than that, Mariposa has rolled. Led by 5-foot-10 senior Milea Appling, who is scoring 24.5 points while pulling down 10.2 rebounds per game, Mariposa owns impressive wins over El Capitan and Livingston.

4. Livingston (12-7) — The Wolves are led by Annie Winton, whose 25.8 points per game rank third in the Sac-Joaquin Section. Livingston beat El Capitan and has a 22-point victory over Ripon.

5. Ripon (12-6) — Led by Reina Sausedo, who averages 17.9 points and 7.2 rebonds per game, the Indians have an overtime victory over top-ranked Sonora on their resume.