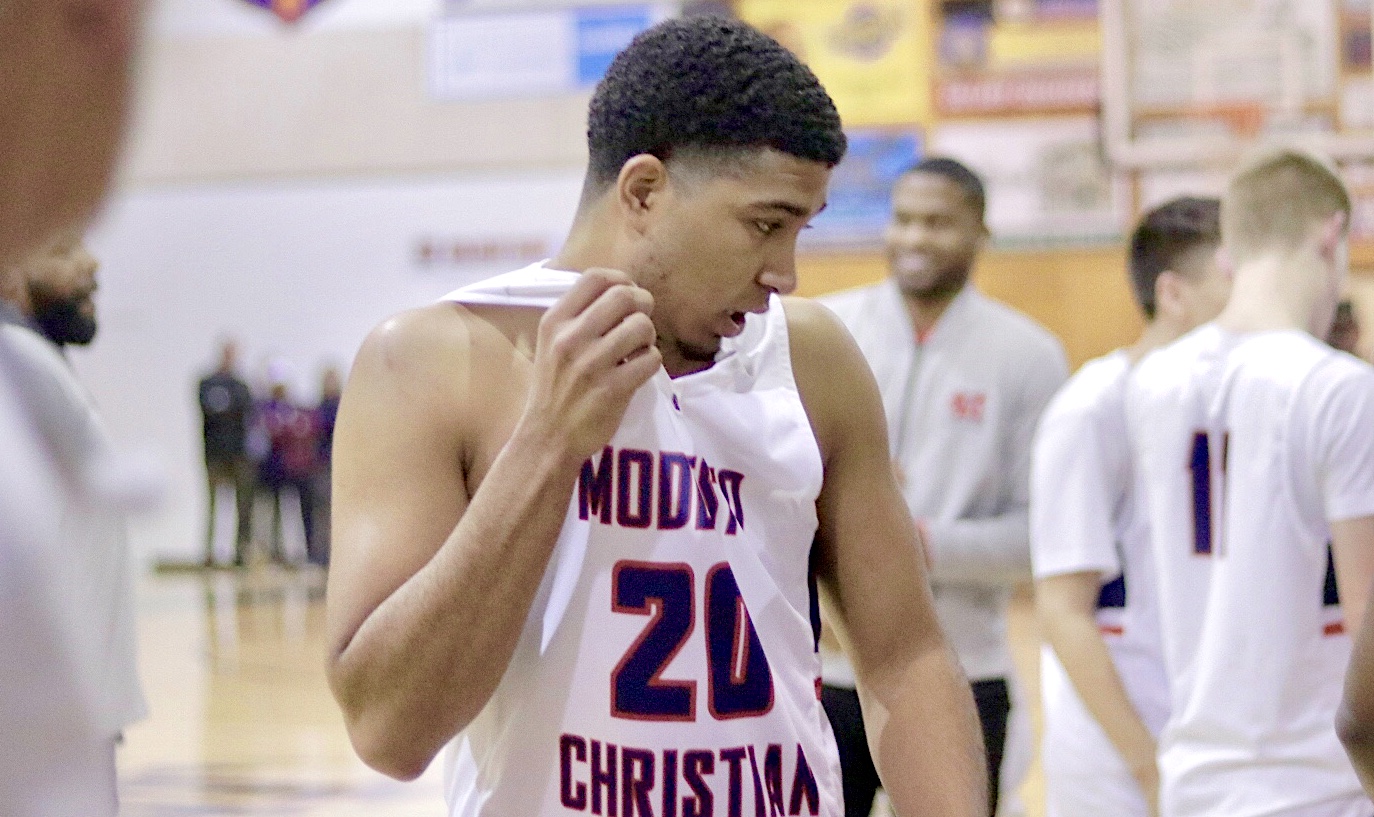 STOCKTON — Dathan Satchell has been chewing the thread loose on his jerseys for years. It’s become part of his game, part of his on-the-floor persona.

Some players wear headbands and long-sleeved shirts. Satchell, Modesto Christian’s sharpshooting senior guard, is a biter. Whether settling in a defensive stance or running off a series of screens, Satchell will pull on the shoulder of his jersey, catching it between his teeth.

On Monday, behind hostile enemy lines, he did more than chomp down on his jersey. He erupted for 26 points, including five 3-pointers as the Crusaders, ranked No. 3 in Northern California, escaped No. 13 St. Mary’s with an 89-80 victory.

With that win, the Crusaders (14-4) improved to 5-0 in Tri-City Athletic League play and extended their national-best league winning streak to 189 games. The streak dates back to 1996, spanning stints in the Southern and Trans-Valley leagues, Modesto Metro Conference and now the TCAL.

“We take big pride” in the streak, Satchell said. “We’re not losing. Period.”

This one nearly got away from Modesto Christian, despite building an 18-point cushion early in the third quarter. Michael Pearson scored five consecutive points to push the lead to 55-37. The last of those points, a pull-up 3-pointer, forced St. Mary’s (13-6, 3-1) to burn a timeout.

With the game teetering on the brink of a blowout, the Rams, fueled by a standing-room only crowd, charged back into contention behind 6-foot-7 forward Bryce Johnson and guard Jamar Marshall.

Johnson scored 26 points  and Marshall finished with 19 as St. Mary’s used a 16-9 spurt to close the third quarter and re-energize a rowdy student section.

With the tight-quartered Morelli Gym rocking, the Rams started rolling.

Marshall poked a ball free near midcourt and Carson Simi found Johnson streaking toward the bucket. He finished through contact to complete the comeback, tying the game at 69-69 with 3:53 remaining. The Rams would never lead in the fourth quarter, but did force two mores ties in the final minutes, the latter on Simi’s jumper above the free-throw line to make it 73-73.

Modesto Christian closed on a 16-7 run. Satchell, with a piece of his jersey beween his lips, gave the Crusaders the lead for good with his fifth and final 3-pointer.

Aaron Murphy pushed the lead back to double digits with a layup in transition and Earv Knox sealed the win with free throws in the final seconds.

Satchell led five players in double figures, despite injuring his leg early in the first quarter. He twisted his knee and limped off the floor. Initially, Fantazia said Satchell wasn’t sure he’d return. He did, showing no ill-effects from the injury.

With three seconds left in the first half, Satchell buried a deep 3-pointer from the wing to give Modesto Christian a 46-33 lead. The Crusaders connected on 75 percent of their 3s (9 of 12) in the first half.

Knox had 13 points, while Tsotne Tsardsidse netted 12. Pearson finished with 11 before fouling out late, and Alex Merkviladze chipped in 10 for the Crusaders, who began a grueling 12-day stretch with Monday’s win.

“I got a bunch of warriors that don’t back down,” Fantazia said. “Everything we’ve been working on forthe last month has been about loving each other, playinf for each other. and picking each other up. To come in a place like this and win — St. Mary's knew what was on the line, trying to end our streak — we had to do that to win.”