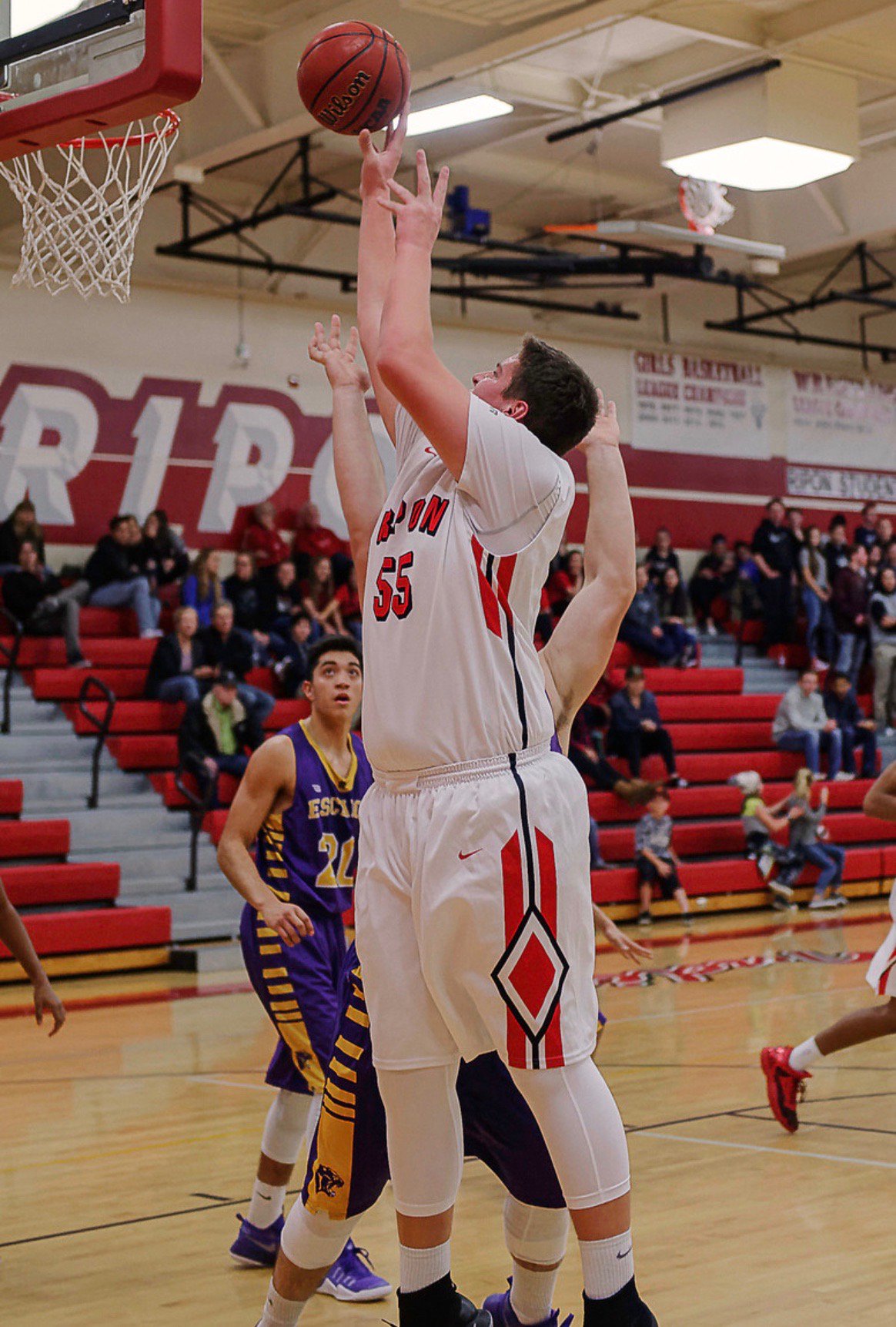 Ripon High center Vincent Olmo is averaging a double-double for the Indians, who slide into the Holiday Hoop Classic three games below. (Ripon High)

SALIDA — Justin Graham won’t be paying much attention to the final scoreboards at the 19th annual Holiday Hoop Classic, hosted by Modesto Christian.

No one has Graham’s Ripon High boys basketball team picked to win the prestigious event, which attracts the best of the best from the Central Valley and Bay Area, and the former San Jose State star is fine with that.

“There’s a good chance we could go 0-4,” said Graham, a Ripon alumnus and one of only two coaches (Modesto Christian's Brice Fantazia) in this year’s field to have also played in a Holiday Hoop Classic.

“It’s the top tournament in the area, everyone knows about it. I remember when I played, it was one of the most fun things to do during the basketball season.”

The Indians are the two-time defending Trans-Valley League champion with three returning starters, including 6-foot-8 center Vincent Olmo, but they'd be cast as underdogs against the likes of Modesto Christian, Campolindo, Beyer and Foothill of Bakersfield, all teams in their half of the bracket.

Instead, Graham is focused on winning another TVL title — and he believes his team’s championship hopes will be forged through the adversity of the Holiday Hoop Classic. Ripon opens the tournament Wednesday evening against Modesto Christian, the third-ranked team in Northern California and the reigning Sac-Joaquin Section Division I champion.

Despite all of its experience, the Indians have lost six of their last seven games, including an 0-4 effort at the Mark Gallo Invitational earlier this month.

“It’s a gut check. Seeing what we’re made of. Seeing how we’ll respond to adversity, because I guarantee you we’re going to face adversity in this tournament,” Graham said. “Someone is going to go on a run. There’s going to be some big dunks and some big plays. How do we respond? Last year, it went well for us. We responded in the right way.”

Last season, the Indians found themselves at the Holiday Hoop Classic. Ripon won its final three tournament games, rebounding from an opening night loss to the Crusaders, and didn’t lose again until the postseason. All told, the Indians went more than two months without another setback, a run of success Graham attributes to the growth he saw during the Holiday Hoop Classic.

Young point guards Danny Hernandez and Nico Ilardi emerged as capable ball-handlers. Six-foot-8 center Vincent Olmo established himself as one of the toughest assignments at the small-school level, averaging 13.1 points, 9.9 rebounds and 2.0 blocks. Troy Brogan made the all-TVL honor roll after averaging 9.0 points as a sophomore and Baz Cheema developed into a do-it-all type for Graham and then head coach Rod Wright.

All five are back.

“We had struggled, just like we are this year, and then we just kind of figured it out,” said Graham, whose team beat Manteca, Buchanan of Fresno and Freedom of Oakley to round out the Holiday Hoop Classic. “Things started clicking and guys figured out their roles. It was our springboard into going undefeated in the TVL. Last year, this was the most important tournament for us in terms of coming together as a team.”

Graham is hoping the Holiday Hoop Classic can do the trick again. Ripon is just 4-7 and hasn’t won consecutive games since November, but he refuses to pin the the slow start — or the team’s continuity issues — on football. The Ripon High football team won a share of the league title and reached the Division V semifinal round.

“Most of our guys have been with me the last couple of years. It’s not like they don’t know what to expect,” Graham said. “Sure, they’re going to be a little rusty. You can’t blame anything on football. These kids know we have tough schedule, play tough teams and it’s not going to be a cake walk.

“These kids, they work hard and they just want to win. It sucks losing, but there’s nothing more motivating than losing games. You figure out what your weaknesses are. We’re motivated. It’s not fun losing six in a row, like we did earlier this year.”

The Holiday Hoop Classic won’t offer any reprieve. Every team on the Indians’ side of the bracket is a larger school, many with a pedigree draped in section and state banners. Modesto Christian and Manteca are former CIF State champions and Beyer has played in back-to-back section finals.

Graham welcomes the fire of competition, though, because the TVL season is just around the bend. Ripon hosts Argonaut on Jan. 2 in its final non-league contest and then starts Trans-Valley League play with Riverbank on Jan. 4.

“We still see ourselves as arguably the best team in the TVL, but we know we have to show that. You can’t just walk onto the court and people fall down and we win games," he said. "We still have a lot to prove; 4-7 isn’t something to be super proud of or show off. We have to get better.”