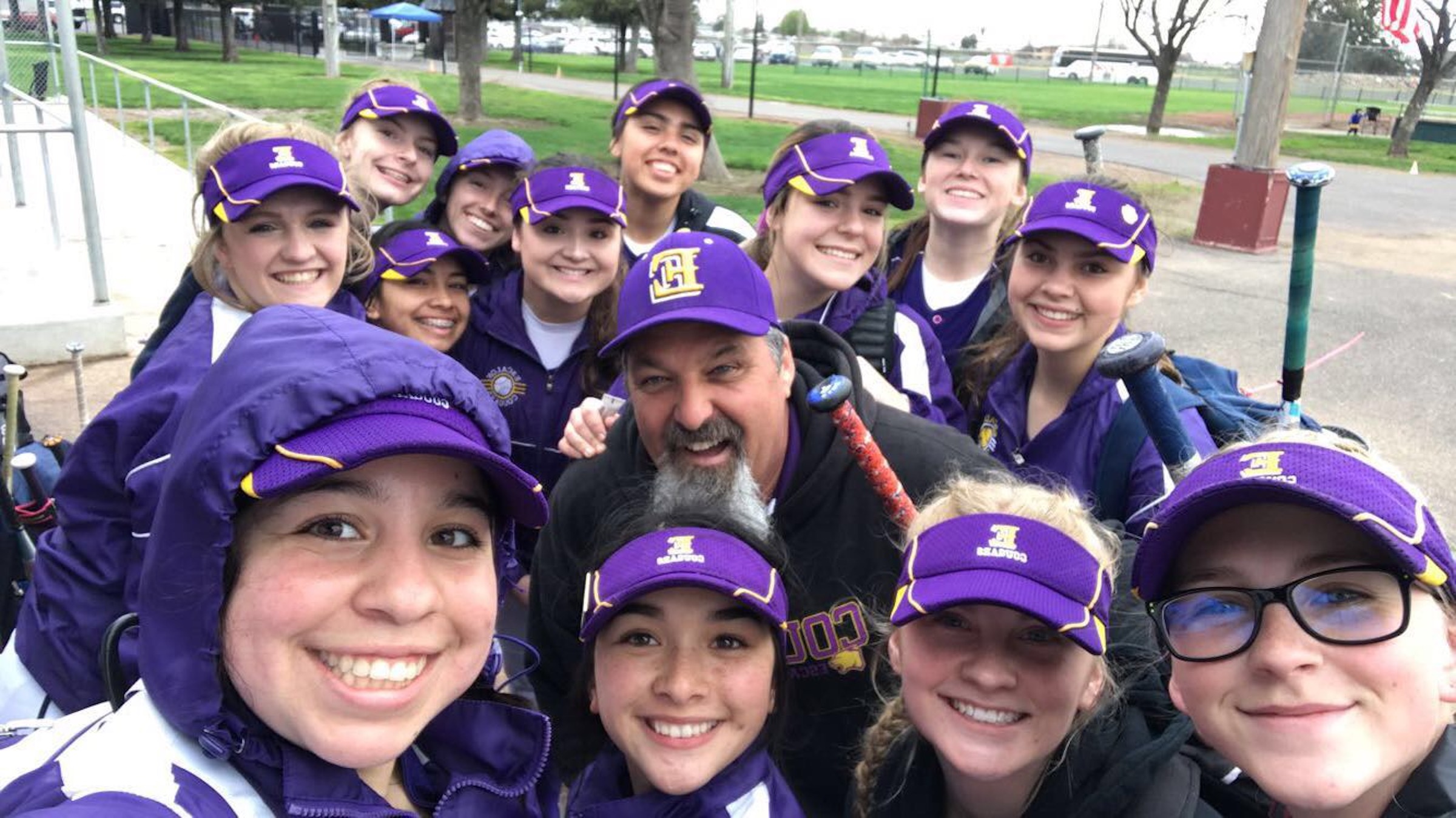 Escalon softball coach Art Brooks (center) is surrounded by his players, all of whom have dedicated this season to his late wife, Terry Brooks.

'Our guardian angel': Team rallies around softball coach whose wife died of cancer

“It really is a family focused on one goal — playing the sport we all love and appreciate,” she said. “It really is one big family.”

That bond has been tested this season by a real-life tragedy.

On March 20, Terry Brooks, the wife of head coach Art Brooks, lost a long battle with cancer. She passed away peacefully, according to an obituary in the Escalon Times, surrounded by loved ones.

While her husband turned the Cougars into a perennial Trans-Valley League and section champion — Escalon has five winning seasons during his six years on the bench, including three straight 20-win seasons — Terry Brooks filled the role of “mother” for the girls who passed through the Cougars’ dugout. She surprised them with pizza after practice. She cooked them breakfast before section playoff games. And she faithfully cheered on the purple and gold.

“She was a mom to all of us,” said Strach, a third-year varsity starter. “It was hard to hear she was gone. We all looked at her like she was the nicest lady ever. For us, she’s our guardian angel on the field.”

Her death has refocused the Cougars (6-5-1), the No. 2-ranked small-school team in the region. Escalon, which canceled a non-league duel with large-school No. 2 Golden Valley in the wake of Terry's death, returned to conference place with a pair of shutout victories against Hilmar and Modesto Christian by a combined score of 27-0.

The Cougars cooled off Hilmar, which had won 10 straight games and climbed to No. 4 in last week's small-school poll. Strach tossed a complete-game three-hitter, striking out a season-high 15 batters. She helped her own cause with two hits and three RBI. The Simpson University-bound ace has 10 or more strikeouts in four consecutive starts and she’s hitting .483 for the season.

“We knew that Hilmar was out to get us,” Strach said. “We’ve always battled hard with them, but we lost to Ripon by one and we were still pretty upset about that. That Hilmar game was a chance for us to say, ‘This is our team and this is what we can do. We don’t care if you’ve won 10 games in a row, we’re going to play our game.’ We went out there and showed them what Escalon softball is.”

And what exactly is Escalon softball?

A family, she said matter of factly, one tested by its schedule and the loss of a mother figure. Despite its record, Escalon remains one of the section’s top small-school programs. Four of its five losses are to large-school teams, including Merced, Ceres and Manteca. The Cougars' only TVL loss is to No. 1 Ripon, a game settled on a walk-off home run in extra innings.

“At the beginning of the season, I would say we were scattered as a team,” Strach said. “As the season has progressed, we’ve grown together and learned to play tighter, which is important. We’ve gotten a lot better.

“We recognized problems and mistakes that needed to be fixed, but the thing that really brought us together is our coach’s wife just passed away. We want to do this for her. We’re all striving and trying to get these wins for her.”