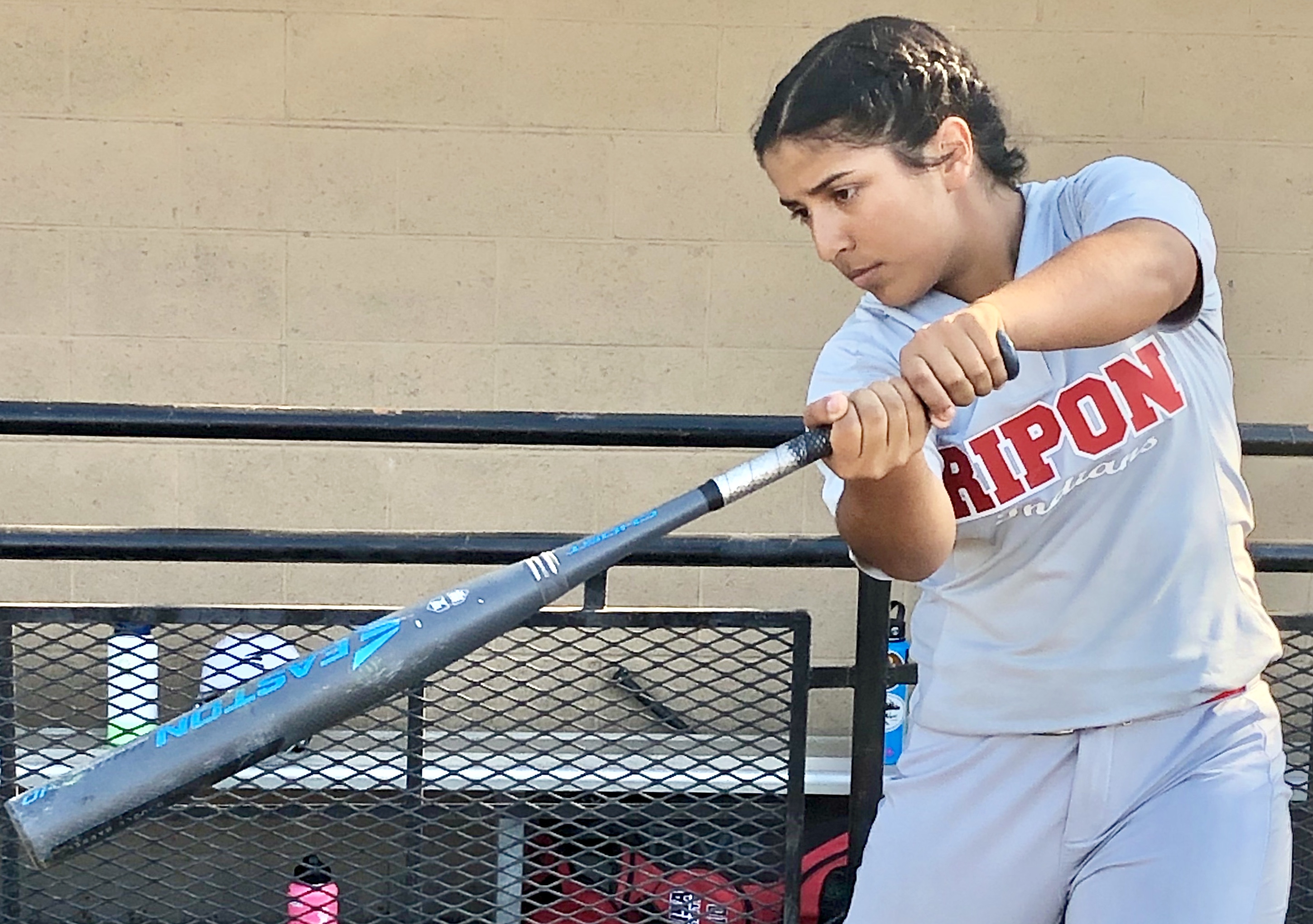 Junior Lilly Mejia has three home runs in the first six games for Ripon High, No. 1 in this week's small-school poll. (Ripon High)

RIPON — The top-ranked small-school team in the region will defy conventional wisdom this season.

In the game of softball, success is often determined by pitching, timely hitting and defense. After 14 seasons, Robert Vernon understands this to be true. He guided the Ripon High softball team to back-to-back Sac-Joaquin Section final appearances in 2015 and 2016 with an undeniable ace, Danielle Sperry, now at Sacramento State.

Vernon’s team is No. 1 once again, but its place among the league and section title contenders is bolstered by a record-setting offense, not its pitching. Ripon leapfrogged Trans-Valley League rival Escalon, the new No. 2, in the rankings with a walkoff 9-8 victory in their league opener. Makenna Daley turned on the first pitch of the ninth inning, driving it over the fence for the game-winner.

It proved the perfect bow on a big week for Ripon (6-0), which also won a slugfest with Manteca. On Monday, the Indians were elevated to No. 1 and received the season's first Yogurt Mill Team of the Week award.

“That was a big test for us,” Vernon said. “Up until that point we hadn’t played anybody that could help us identify what kind of team we have. Jumping in against Manteca, who has a solid team out of the (Valley Oak League), we learned thats no lead is safe and we need to hit the ball.

“We’re going to have to hit the ball. The days of scoring two runs and having Danielle run the table are far from over. These kids realize we have to win ugly games and outhit teams to be successful. These two games were indicative of that.”

Ripon has a promising talent in the chalked circle in sophomore Sydney Thomason, but she isn’t a power pitcher. The power, Vernon said, will come from a lineup that has tested the fences of every park its played in.

The Indians have clubbed 14 home runs in six games, the most by any team during Vernon’s 14 seasons on the bench. By comparison, Ripon had just 10 home runs during the 2018 season.

“They know who we are and how we have to win games,” Vernon said. “We have a solid sophomore (Sydney Thomason) who is a decent pitcher. She hits her spots, mixes it up and moves it around, but she’s not going to throw it 60 mph and strike out 15. We know we have to score a lot of runs to win ball games sometimes. … We have to keep our foot on the gas pedal.”

Mackenzie Hutchinson leads the team with five home runs out of the No. 7 hole. Rising recruit Lilly Mejia has three home runs. Mejia, who plays in the infield, outfield and catches, is generating serious interest from San Jose State and the University of the Pacific. Vernon also said DePaul scouted the junior captain against Manteca.

Power pulsates through the batting order, propelling Ripon to a near-perfect start.

“I can put them in any order I want to,” Vernon said, “and we’ll have the results. All the way through the lineup they can hit.”

1. (1) Oakdale (7-0-1): The Mustangs picked up a series of impressive victories, including back-to-back wins over Tracy, the reigning Sac-Joaquin Section Division I champion, and No. 3 Merced.

2. (2) Golden Valley (7-1): Behind flame-throwing pitcher Marissa Bertuccio, the Cougars have reeled off 17 straight scoreless innings, including shutout victories over Gregori, Johansen and Pitman.

3. (4) Merced (7-2): The Bears distanced themselves from small-school giants Escalon and Hughson, and then put top-ranked Oakdale in a bind for four innings. Merced led the Mustangs 2-0 in the fourth before falling 4-2.

4. (5) Enochs (5-1-1): The Eagles picked up four victories last week and left no doubt. Enochs thumped Hughson, Downey, Turlock and Beyer by a combined score of 39-9.

5. (3) East Union (3-4): The Lancers are on the verge of falling out of the top-5 after two straight losses. The games don’t get any easier. East Union opens VOL play at Sierra, a two-time defending section champion and the Lancers’ arch rival.

1. (2) Ripon (6-0): The Indians assume the top spot after a thrilling walk-off 9-8 victory over Escalon to kick off the TVL season. Coach Robert Vernon’s team is off to a record-setting start at the plate.

2. (1) Escalon (4-5-1): The two-time defending Sac-Joaquin Section champions were beaten in the final at-bat by Ripon in their TVL opener, but the Cougars are rewarded for their strength of schedule. Escalon owns wins over East Union, Enochs, Gregori and Linden.

3. (nr) Linden (11-1): The Lions have nine straight games and vault into the top-5 rankings after pummeling Manteca and sweeping a Saturday doubleheader with Ripon Christian. Linden’s only loss is to Escalon in extra innings.

4. (3) Waterford (6-1): The Wildcats whipped Gustine in their Southern League opener, 19-1, and will look to gain early separation in the standings with games against Ripon Christian (Tuesday) and Mariposa looming (March 26).

5. (4) Hughson (6-5): The Huskies slip in the rankings, but only slightly, after four consecutive losses to large-school opponents. Three of those losses were by two runs or less.