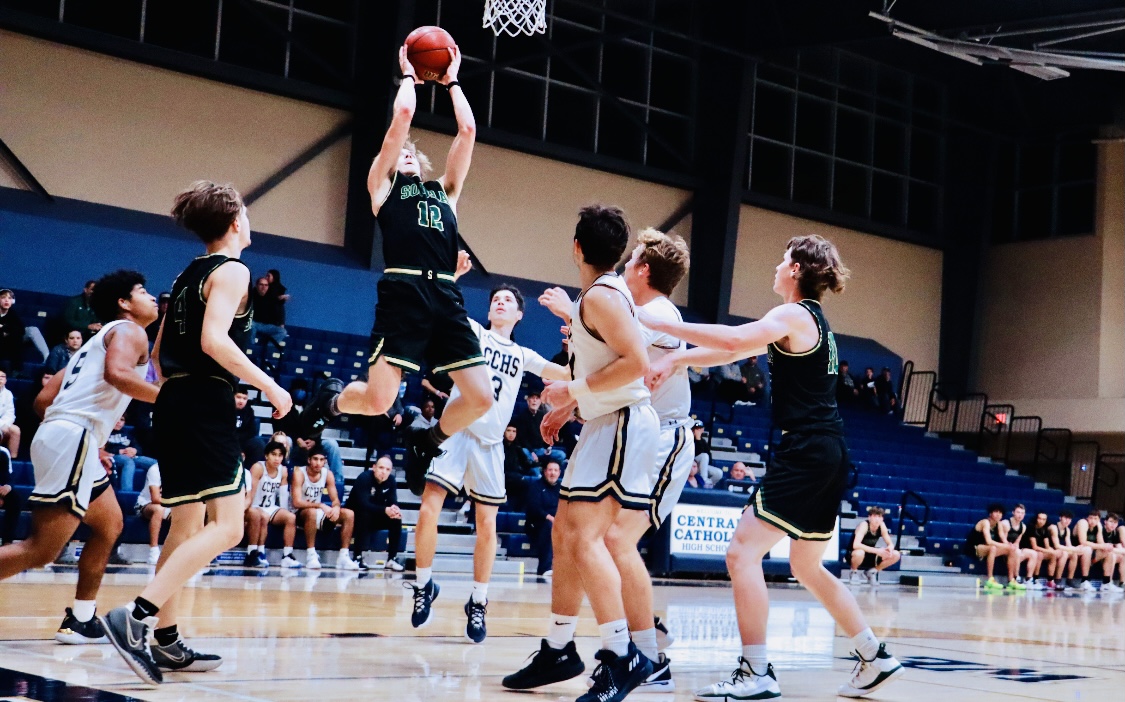 Sonora senior guard Cal Hanson pulls down an offensive rebound during a 62-40 victory over Central Catholic on Saturday, Dec. 18, 2021, in the third-place game at the Mark Gallo Invitational. (Samantha Schmidt)

Stop me if you’ve heard this one before: the Sonora boys basketball team attacks with an under-sized guard with savvy, bounce and a unique ability to make shots.

Two years after Austin Patterson stole the show at the Mark Gallo Invitational with a flurry of buckets, Sonora returned with another fast-action and fearless guard eager to break out. Cal Hanson controlled the tempo and flow throughout on Saturday evening, scoring 18 of his game-high 26 points in the first half as the Wildcats rolled to a 62-40 victory over Central Catholic in the third-place game.

Sonora is now 3-0 against the Raiders in the Gallo Invitational, one of the region's signature holiday tournaments.

"We love coming down here to this tournament. It's always well run and it's a great facility," Sonora coach Lloyd Longeway said. "I don't like that we've had to face Central in each of these games, because they're always tough. Coach (Mike) Wilson and Central Catholic is one of the programs we really respect and try to almost follow; all their success they've had year after year. This tournament, there's great competition and it gets us ready for the season."

Sonora led wire to wire, improving its record to 11-1 while atoning for its first loss of the season one night earlier. Hanson scored the Wildcats’ first six points and then punctuated the first half with another flurry. He pulled up along the baseline and then beat the buzzer with a straightaway 3 to give the Wildcats their biggest lead of the half, 35-18.

"I was curious to see how we'd respond" after our first loss, Longeway said. "The guys were a little quieter on our way down here, but I think they're happy with the way that they did (respond)."

The Raiders had more turnover than points in the first quarter and struggled to control the glass, testing coach Wilson’s patience. As Wilson searched his bench for answers, Central Catholic leaned on 6-foot-5 sophomore Wesley Payne who tried his best to stabilize. Payne, an all-tournament selection and the Raiders’ leading scorer throughout, scored eight of his 17 points in the first half.

“Sonora is an old rival,” Wilson said, “and they will be for a long time.”

Hanson was the story.

His wrists wrapped in black and sporting long sideburns, Hanson, a 6-foot senior,  plays the game with speed and style. He flies up and down the floor, crashes the glass, and paws at the ball.

More importantly, for coach Longeway and the Wildcats, Hanson can score the basketball. He followed his first-half explosion with five points early in the third quarter, including a 3, as Sonora doubled up the Raiders.

"This is always the best competition we get throughout our schedule," Hanson said. "It's great prep for the postseason and hopefully state."

Hanson prides himself on being a “dog” at both ends of the floor, and on Saturday, he was more than just bark. He gassed Central Catholic’s guards and pestered its post, creating chances for himself and his teammates with his tenacity on and off the basketball.

"I like to mix it up. I can shoot it, but I also enjoy getting my teammates involved and going off the bounce," Hanson said. "I always want to be the person who plays the hardest on the court.

"Over the last year, I've tried to get more physical with my game, rebounding and crashing the boards, and being a dog on defense. That's really been a focus for me."

During one sequence in the first half, Hanson ripped the ball out of forward Tyler Paul Wentworth’s hands in the post and raced the length of the court for a short baseline jumper. He also had out-leaped the Raiders’ front court for two follow-up rebounds that narrowly missed.

"Cal had a great tournament," Longeway said. "His focus was there from start to finish. ... He's just dialed in, and it makes us so much better when he's locked in. And his leadership has been essential, as well. He's really grown as a leader, thinking about other guys before himself."