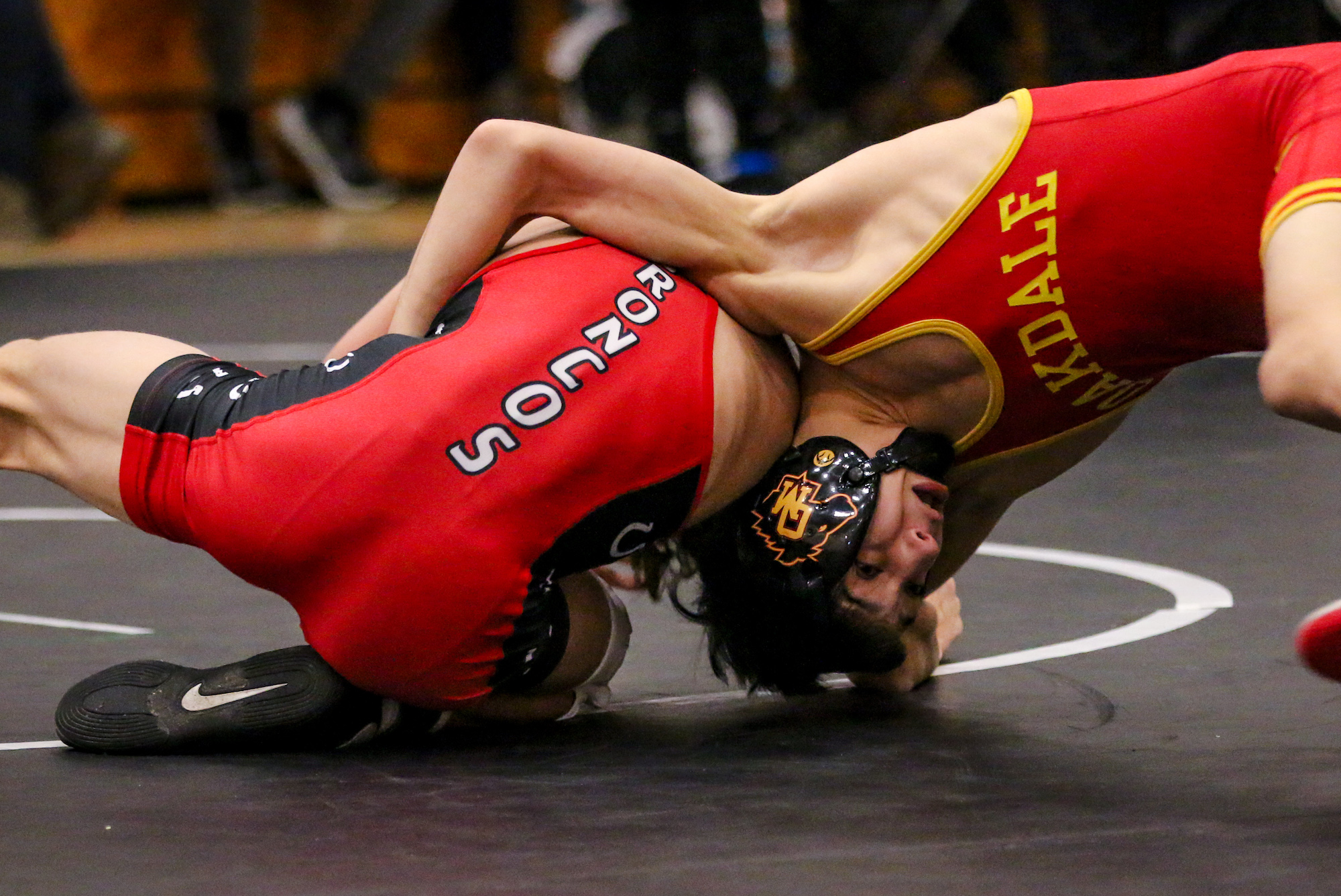 Oakdale's Brayden Abell reached the quarterfinals on Day 1 of the CIF State Wrestling Championships on Thursday, Feb. 21, 2019. Abell won three matches, but survived a close call in his opener, a 1-0 victory.

BAKERSFIELD – The crowd stood, the national anthem was sung, and then history was made Thursday morning at the CIF State Wrestling Championships.

The 10 mats spread across the floor soon were filled with girls competition for the first four hours at Rabobank Arena. It’s believed to be the first co-ed state meet in the nation and, for the girls, a major jump in status after years of their state meet at Hanford and later at Visalia.

“Today was pretty simple, even though we (the boys) had to wait five hours after weigh-in. That part was kind of relaxing,” Oakdale coach Steve Strange said. “But we didn’t cross paths in the gym at the same time today. You’ll actually see boys and girls matches together on Friday.”

The nearly 11-hour program also ushered in another first – the first of a three-day meet over the traditional two. The boys-girls merger caused major changes, for sure, but the me-vs.-you at the highest level brought the usual drama.

The area will be represented by 13 wrestlers, six girls and seven boys, in Friday afternoon’s quarterfinals.

Oakdale, ranked eighth in team standings by The California Wrestler, did its part by vaulting four into the quarterfinals. Sophomore Henry Porter (132) and senior Gabe Martinez (170), state finalists in 2018, advanced along with sophomore teammate Brayden Abell (106).

Abell, Martinez and senior Cody Golding (195) all won three matches to get there. Turlock landed two in the quarters – William Giron (113) and heavyweight Michael Jeffus. Giron and Pitman junior Izzy Tubera will collide Friday for the third time in four weeks (Tubera won the first two).

There were no major surprises, though Abell struggled to win his opener 1-0. Martinez, a two-time Sac-Joaquin Section Masters champion, won all three by fall, two in the final round after falling behind.

“Sometimes the opponent will make you look sluggish. Brayden kept his composure (in his first match),” Strange said. “Gabe’s experience really paid off.”

Martinez again will reach deep into that experience bag in today’s bout against top-seeded Trey Munoz of Trabuco Hills.

Pitman, which sent a school-record six to Bakersfield, won seven of its first eight matches. The Pride was stung, however, by Kendall LaRosa’s controversial 7-3 loss to Jayden Smith of Brawley at 160.

The bout was stopped for about 15 minutes while coach Adam Vasconcellos issued a protest regarding an alleged choke-hold among other problems.The protest was denied and a possible 2-2 deadlock was switched to 4-0. That plunged the sixth-seeded LaRosa into consolation.

“We didn’t feel we got a fair shake. This is what happens sometimes at state,” Vasconcellos said. “It messed up the whole match.”

Vergara won both via pin, one in the third and the second barely a minute after the start. It was a good first day for the 28-0 former state finalist.

“Her first match was a little slow,” Gregori coach Mike Cantwell said. “The second match was when she looked more like herself.”

Ward (34-4), a three-time Masters champion, also won a pair by fall. Freitas (31-0), as daunting as a No. 3 seed gets, enjoyed a win by default, then pinned Ava Lassiter of Aliso Niguel in 48 seconds.

Friday's session begins with boys and girls consolation rounds before the quarterfinals at 3 p.m. Strange said national rules mandate a wait of no longer than two hours between weigh-in and competition, which means the new format has gone 0-for-2 for many wrestlers.

That aside, the second day promises an authentic co-ed flavor and more of wrestling’s brave new world.