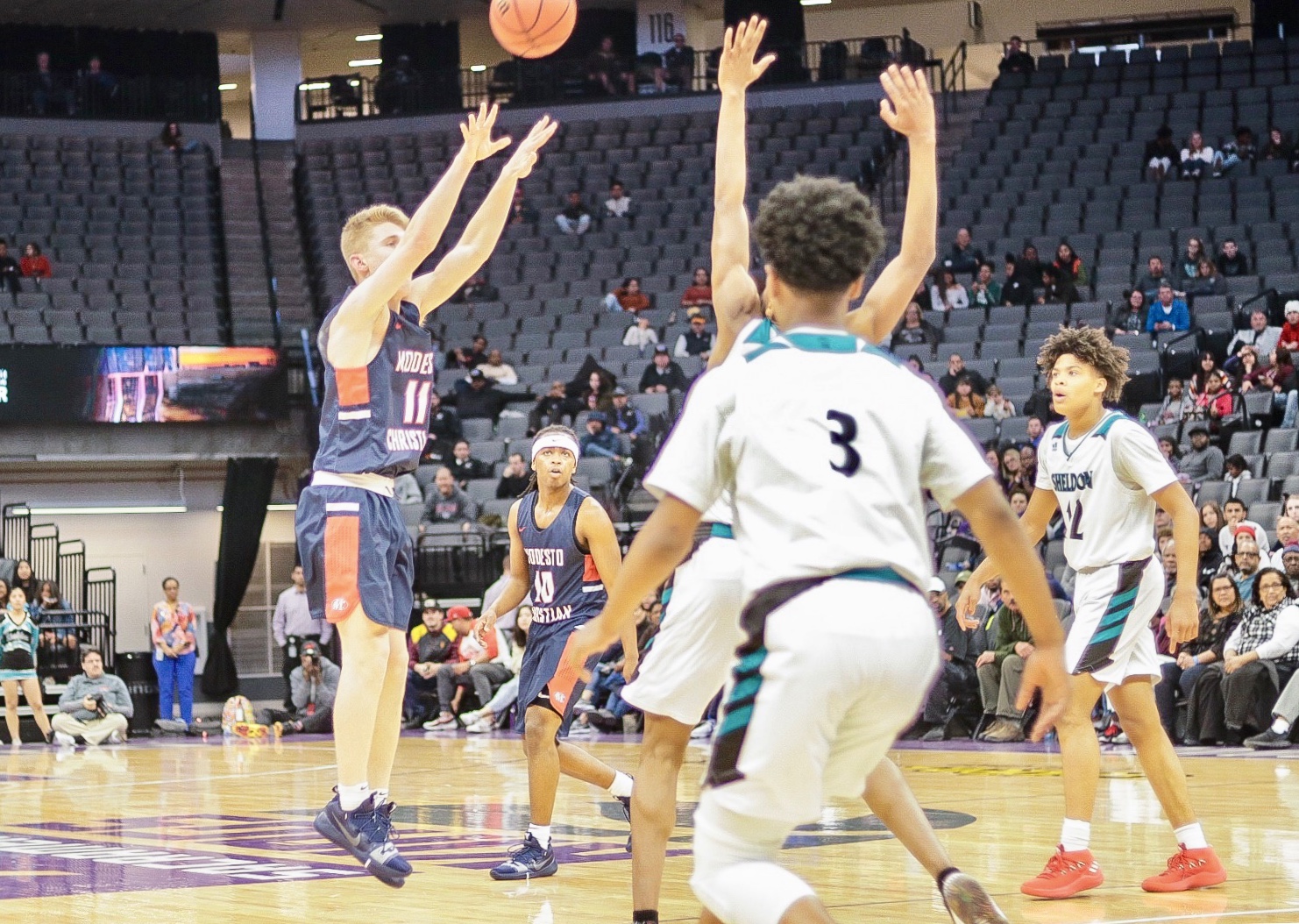 Freshman Devin Day came off the bench and knocked down two 3-pointers in the fourth quarter of Modesto Christian's 56-55 victory over Salesian in the semifinal round of the CIF State Northern California Open Division tournament. (Kris Zweigle)

'That's a bad boy right now': How a freshman shot MC into the NorCal final.

Modesto Christian freshman Devin Day has captured the attention of the regional basketball community with a jump shot so pure it evokes all emotions. Some scream and cheer its excellence, while others curse and boo its brilliance. Day is a baby-faced sniper; a “bad boy,” says his coach, not far removed from timeouts, cartoons and naps.

In the biggest game of the season, one with state and national implications, Day canned 3-pointers on back-to-back possessions, stabilizing the Crusaders after its leading scorer fouled out with about seven minutes left. Modesto Christian held on for a 56-55 victory over state No. 1 Salesian in the semifinal of the CIF State Northern California Open Division tournament ... thanks, in large part, to the kid.

“That’s a bad boy right now,” Modesto Christian coach Brice Fantazia said of Day. “There’s a reason Division I colleges are calling for him as a freshman. Games like this, most freshmen would wither in moments like this, but he steps up even bigger.”

Day’s prowess from beyond the arc has catapulted the Crusaders into the Northern California Open Division final for the third time in program history. Modesto Christian will butt heads with a familiar foe on Tuesday evening at Cosumnes River College at 7 o'clock.

The Crusaders (27-7) tangle with Sheldon (23-10) for the sixth time in four years and second time in 11 days. This time, the stakes are as high as they’ve ever been. The winner advances to the championship game of arguably the toughest high school tournament in the nation, where they’ll play either Sierra Canyon, the defending Open champion, or Mater Dei.

With Day and a roster returning to health, Modesto Christian likes its chances of returning to a state final for the first time since 2004.

“When it leaves his hand I might as well get back on defense, because that’s water right there,” senior Aaron Murphy said of Day, who shot 44 percent from the 3-point line during the regular season. “He’s a great shooter.”

Day was destined to be.

His father, Ross Day, played collegiately at Southern Utah and had a chance to continue his career with a professional contract overseas. Instead, Ross Day poured his basketball experience back into his son, whose skills developed quickly.

The younger Day has spent his childhood playing up in age. He was a star for Chuck Hayes Basketball’s 16-and-under, which also featured Pearson Jr., and led the 14-and-under team to the Adidas Junior Gauntlet Summer Championship, averaging 34 points per game with two 40-point outbursts.

Look at him now.

In his first postseason, Day hasn’t shied away from the spotlight. He averaged 10.4 points per game through the first five games, one of four players in double figures for the Crusaders. He also shot 16 of 29 from 3-point land.

“The thing I love about him is when he makes mistakes he wants to be coached, and all year I’ve been coaching the heck out of him,” Fantazia said. “Most freshman would have put their head down and got upset, but he never did. He kept fighting and stepped up huge for us tonight.”

His penchant for the big shot helped Modesto Christian secure arguably the biggest win in program history. Salesian entered the game unbeaten, and ranked No. 1 in Cal-Hi Sports’ state poll and top-five nationally, according to MaxPreps. Just when it looked like Salesian had Modesto Christian where it wanted it, forcing Pearson out of the game with his fifth foul, Day burned the Pride with back-to-back 3s.

“For Devin to come in all confident and knowing what he had to do, to perform and get what he had to do done, that’s big. That’s big,” Murphy said. “He’s doing this now as a freshman just imagine when he gets to be a senior. It’s going to be noise.”