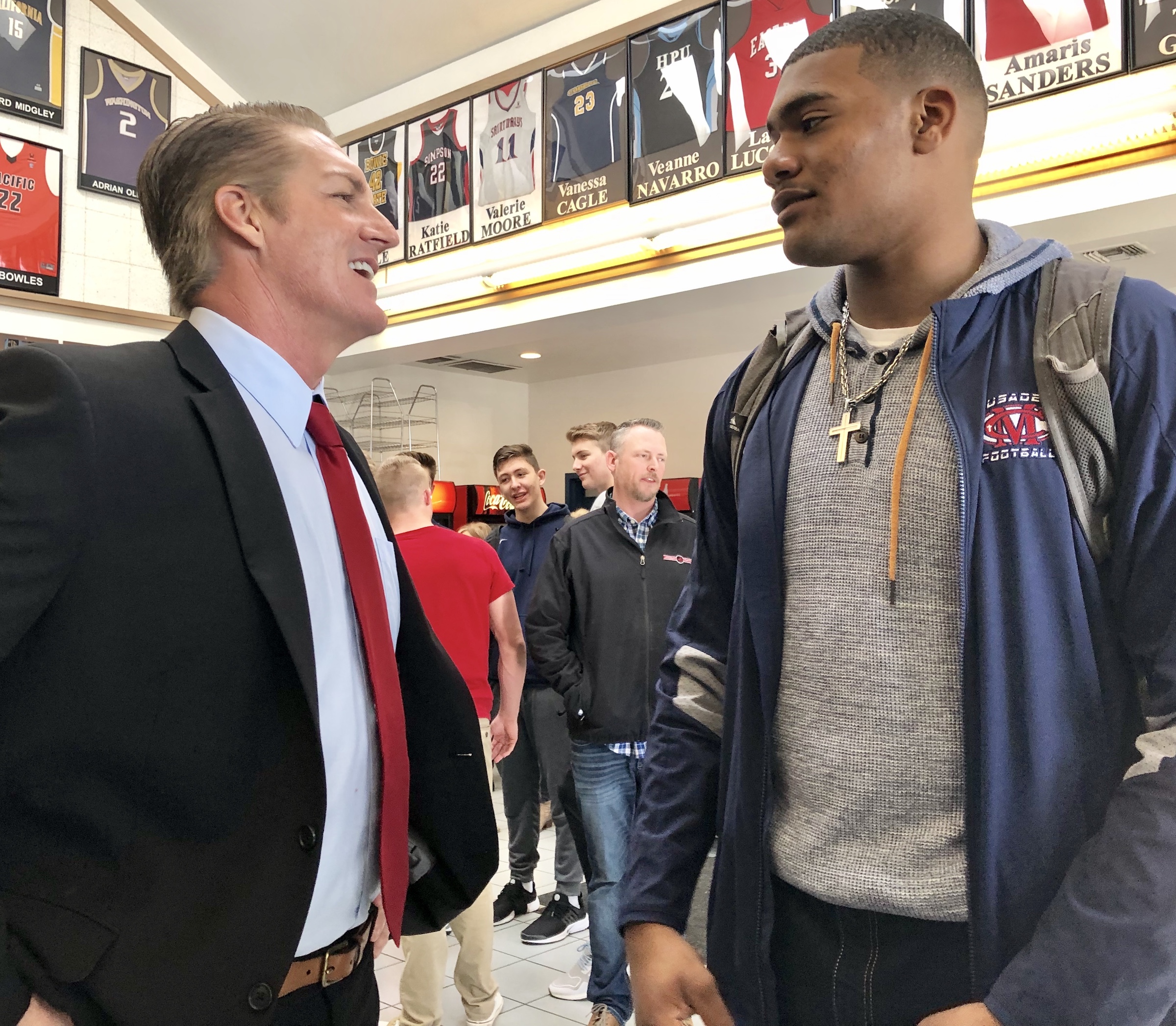 Ryan Green (left) speaks with Xavier Carlton shortly after Green's introduction as head football coach at Modesto Christian in January. Today, neither Green or Carlton remain at the school.

How it happened: A closer look at Modesto Christian's unusual offseason

Since a stunning loss in the semifinal round of the Sac-Joaquin Section playoffs, the Modesto Christian football program has endured a topsy-turvy offseason, one chock-full of change and struggle.

In 2018, the Crusaders captured a share of the Trans-Valley League championship and earned the No. 1 seed in the Division VI playoffs. However, Modesto Christian’s run was stopped short by an unlikely foe, Ripon Christian, triggering a series of jarring events for an iron-man program.

Here’s a look at the events that highlighted an unusual offseason for one of the region’s premier football programs:

Nov. 23, 2018: Top-seeded Modesto Christian, weakened by injuries to two-way standouts Jose Hernandez and Sam Coon, is knocked out of the Sac-Joaquin Section Division VI playoffs in the semifinal round by Ripon Christian, 25-13. The loss is the first in program history to the Knights, the Southern League champions.

Jan. 9, 2019: Mike Parsons steps down as football coach, citing the loss to Ripon Christian and a period of reflection over the holidays. “After a tough loss (to Ripon Christian in the semifinal round of the Division VI playoffs), going through Christmas, praying about it and taking some time to reflect, I felt my tank was empty as far as being a head coach,” Parsons told FrontRowPreps.com. He left Modesto Christian as the program’s all-time winningest coach (99 victories) with back-to-back Trans-Valley League championships in 2017-18. In 11 seasons, he guided the Crusaders to five section final appearances, and section and CIF State Bowl titles in 2009. “He showed what can be accomplished when the kids and the coaches have the same goal,” the school’s former athletic director, Greg Pearce, said.

Jan. 22: Ryan Green, a former Denair and University of the Pacific star, is named head football coach, and his introduction is attended by many of the school’s students, coaches, teachers, administrators and board members. Green promises an all-star staff and commitment to building a full-service football program. Green is selected from a pool of more than 21 candidates across the nation. “It’s an easy transition,” Green says. Optimism is high, as Green is accompanied by his son, highly-touted quarterback Beau Green who began 2018 as Downey’s starter.

April 30: Defensive end/tight end Xavier Carlton transfers to perennial Utah state champion Juan Diego Catholic School, signaling the start of a mass exodus from the school. At 6-foot-7 and 250 pounds, Carlton, a four-star prospect, was the region’s most recruited football players with offers to USC and UCLA, Cal and Stanford, Notre Dame, Michigan, Texas and Oklahoma, among others. His transfer wasn’t football related, said mother Lorraine Carlton. Instead, she received a job promotion that required relocation.

May 2: Less than two weeks before the start of the spring season, Green steps down as coach at Modesto Christian and his resignation was announced in a letter to the school’s families. “He decided that Modesto Christian isn't a good fit for him," the letter stated.

Aug. 5: The Modesto Christian football locker room is vandalized and robbed, per a tweet by Butler. In accompanying comments, Butler reveals the struggles he’s faced in the wake of his hiring. He alleges former players, coaches and parents have undermined his regime by reaching out to current players, and divulges having to hire a coaching staff twice.

Aug. 12: Butler invites FrontRowPreps.com to his place of business, The Performance Lab in Modesto, to discuss his expectations as a head coach and the current state of the program. He thanks and respects his predecessors, but believes the focus should be on the present and future -- not the program’s past.