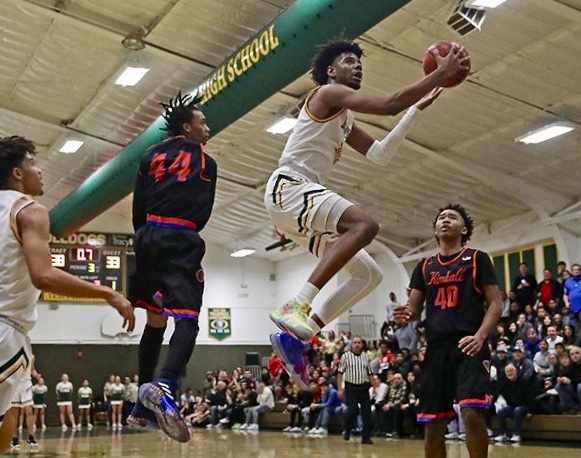 Tracy High's Isaiah Hawthorne hangs in the air for two points during a non-league contest with Kimball. Hawthorne has committed to play at the University of the Pacific. (Stu Jossey)

Green, a 6-foot-4 guard with rockets in his shoes and a pure shooting stroke, is considered the No. 1 player in his class, and he performed as such during the Classic. Green was named the tournament MVP as San Joaquin Memorial defeated Clovis West and Modesto Christian on back-to-back nights.

As the Holiday Hoop Classic prepares for its 19th opening day — Wednesday at Modesto Christian with around-the-clock action — there isn’t a generational talent of Green’s caliber in the field, to be sure.

There are, however, several elite players with opportunities at the next level.

“Top to bottom, this tournament is still loaded,” Modesto Christian coach Brice Fantazia said. “I’ve gotten more calls from college coaches this year than last year. There are lot more kids in the tournament this year that are four-year players that colleges are interested in.”

Here’s a look at a few of the big names, near and far, gracing the floor this week:

Anderson was named to the Holiday Hoop Classic all-tournament team as a freshman. The 6-foot-3 point guard is one of the top players in the class of 2021 and holds offers from San Diego State, San Francisco and Fresno State.

The 6-foot-7 small forward has committed to Pacific, where he’ll play for former NBA point guard Damon Stoudamire. Hawthorne is a returning all-tournament selection and a three-star prospect.

The headline on Wilburn’s Oakland Soldiers highlight tape captures the player in his totality: “Does it all.” Wilburn is averaging 10.8 points, 6.7 rebounds and 3.1 assists for the Cougars, a top-40 team in the MaxPreps state rankings and a bona fide threat in the Valley Oak League. “I think the kid is the best kid in the section,” Weston Ranch coach Chris Teevan told The Manteca Bulletin on Nov. 28. “I don’t know that there is a more valuable player in the section than him.”

The 6-foot-1 guard leads the Cougars in scoring with a 15.4 average. He has scored in double figures in all but two games, including back-to-back 20-point games against Brookside Christian and Bethel. Lindsey is automatic from the free-throw line, converting 14 straight and 88 percent for the season.

Only a freshman, Mahaney is a 6-foot playmaking guard with dead-eye accuracy from deep, sick handle, and a Division I offer from Northern Arizona. He is averaging a team-high 18 points for Campolindo.

A third-year varsity player, Carter Mahaney has picked up where he left off as a sophomore. The 6-foot-3 Mahaney, Aidan’s older brother, is averaging 13.2 points, just slightly below his 2017 average. He’s also averaging 4.5 rebounds and 3.5 assists, a versatility that makes him one of the Bay Area’s top guards.

Jackson casts a large shadow. The junior possesses a 6-foot-10, 235-pound frame and a 7-foot wingspan, measurements that no doubt excite major college and NBA scouts. Jackson, who has been offered by Arizona, California and Nevada, averaged 14.7 points and 10.2 rebounds as a sophomore.

The 6-foot-2 point guard is averaging nearly 19 points per game for Foothill. Phillips is a two-star prospect generating interest from Fresno State and the University of Texas, El Paso. Rated the No. 12 sophomore in California by Cal-Hi Sports.

California colleges are going crazy for the 6-foot-9 rim protector. “Squid” Turner might be the Central Section’s best defender because of his length and athleticism, especially around the basket. He holds offers from UC Davis, San Diego, UC Irvine, San Francisco, Fresno State, Cal State Northridge and Long Beach State.

The 6-foot-9 senior is averaging a double-double for the Indians with 15.8 points and 11 rebounds. He also averages 2.6 blocks. What makes Olmo dangerous, though, is his ability to stretch the defense. The big man is shooting 35 percent from beyond the 3-point line.

Cedano is the only player with a connection to the Buffaloes’ run to a CIF State Division III championship in 2016. The senior guard has blossomed into an all-around talent. In victories over Tracy and Turlock last week, Cedano averaged nearly a triple-double.

While Beyer’s strength is its depth and balance, Bundy is a pivotal piece. In a guard-heavy system, Bundy gives the Patriots an inside presence, but he also has the ability to play in space or on the wing. He was named to the Mark Gallo Invitational all-tournament team.

The UC Davis commit sat out Saturday’s loss to Northern California No. 1 Salesian with the flu, but should be healthy in time for the Holiday Hoop Classic. Murphy was named a game MVP at the HoopHall West national tournament and all-tournament at the Clovis West Nike Invitational.

The sharpshooting freshman was the MVP at the Clovis West Nike Invitational and leads the Crusaders in scoring. The adjustment to the varsity speed has come easy to Day, who regularly played up in age with Chuck Hayes Basketball on the summer AAU circuit.

A three-year varsity starter, Pearson has been the engine in the Crusaders’ attack. The strong and lightning quick  point guard is among the best in his class in Northern California. He can facilitate and score, as witnessed by his career averages of 10.9 points and 3.4 assists.

Fantazia has called Satchell one of the top scoring guards in Northern California and the 6-3 senior lived up to the hype in the final of the Clovis West Nike Invitational. Satchell had 15 points, 10 rebounds and six assists in a victory over the hosts.

Fantazia looks forward to the mix of local and regional talent, and the exposure the tournament creates for all.

“For me, I’ve really enjoyed watching the local teams because of the kids I know. I’ve been watching Cedano play for years. The Ripon kids and the Turlock kids, I like this experience for them. I’m glad they get to be in this atmosphere. I like seeing the local kids get this opportunity.”