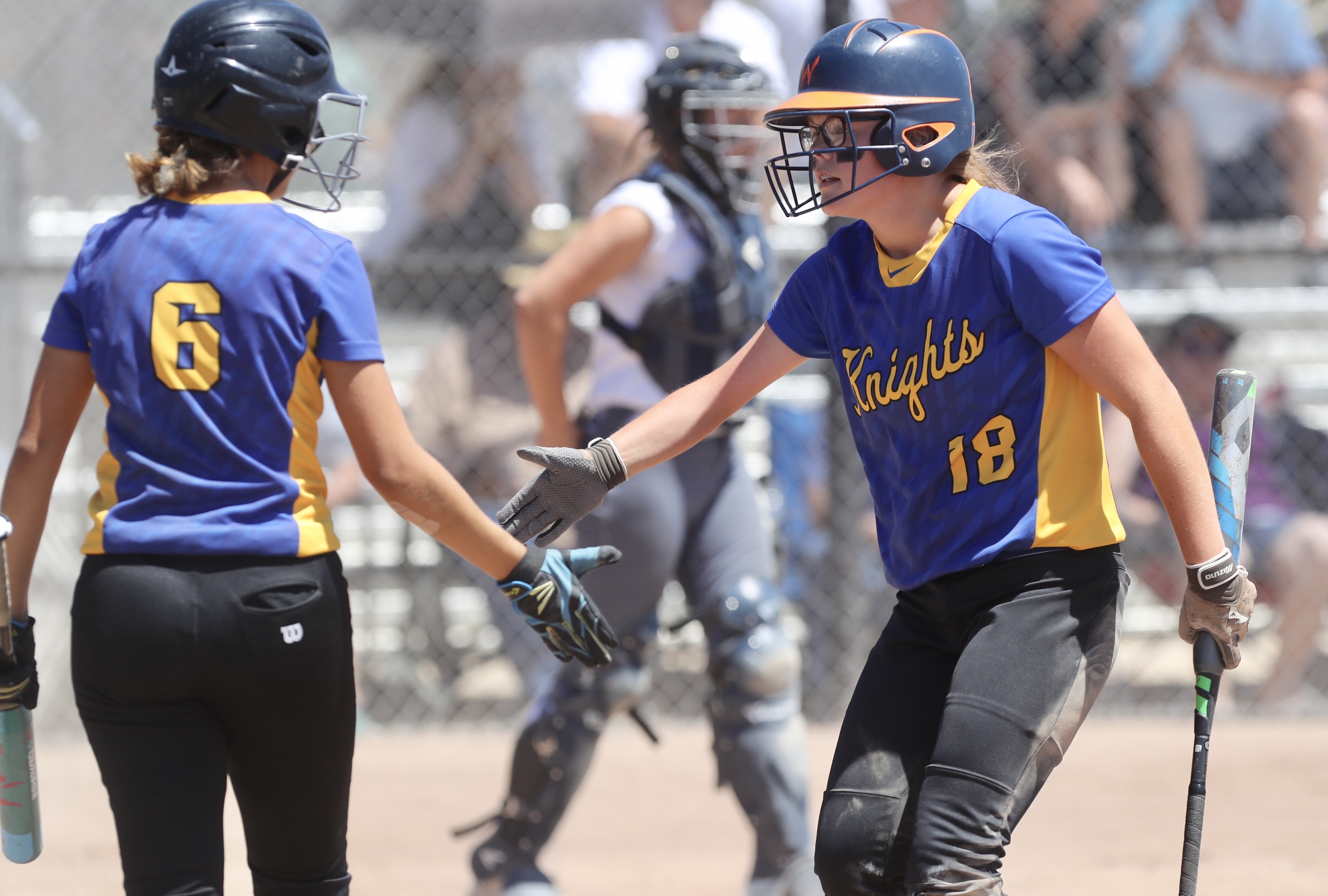 Ripon Christian's Madison de Graaf (right) is congratulated by teammate Adriana Arias during a victory over Stone Ridge Christian in the Sac-Joaquin Section Division VII championship on May 19, 2018. (Wayne Thallander)

RIPON — Softball coach Lenny Rizzuto marvels at her consistency and excellence. Assistant coach Steve de Graaf, her father, is proudest most of her emotional maturity and compassion for her teammates. As for the opposition, like Waterford High’s Donnie Donaldson, game recognizes game.

From inside the chalked circle or the batter’s box, there isn’t anything Ripon Christian junior Madison de Graaf can’t do — and hasn’t already done.

Now in her third season at the varsity level, de Graaf is a two-time Sac-Joaquin Section champion with a bullet-proof resume. She has won 82 percent of her starts, including all three this spring, and is hitting .401 with a chance to collect her 100th career hit this season.

In an area rich with talent, de Graaf, a multi-sport athlete, deserves a seat at the table.

“You would never know it,” said Donaldson, whose team went 0-2 against de Graaf last spring. “You see her pitch like that, but she moves the ball well, and if you hit the ball back to her, she still makes the play.

“My daughter (Alyssa Donaldson) crushed one back at her, but however she did it, she got a glove on it. We tried to bunt on her and make her field the ball, but she makes all the plays. You’d never know…”

According to officials at Shriners Hospital for Children in Sacramento, during the time of her diagnosis, de Graaf was the only known patient born without an elbow in just one of her arms.  She is missing the elbow in her right arm — her non-throwing arm — though it took a few months to diagnose the condition.

Her mother, Melinda, noticed the irregularity while changing the then-3-month-old de Graaf during a family vacation.

“They never caught it at the hospital,” Steve said. “We were vacationing and my wife said you have to come look at this.”

As he made his way to the bedroom, Steve said his thoughts were elsewhere and nowhere at all — dirty diaper, rash, normal issues that beset young parents. Soon, he understood the severity of the discovery.

His daughter was missing a part.

Her bone is solid, from shoulder to wrist, with a slight bend. Today, the arm is about five inches shorter than the left and dramatically underdeveloped. Without an elbow, de Graaf cannot isolate the muscles in the upper arm.

“I don’t get startled by anything, but (Melinda) was panicked about it,” Steve recalled. “I was like, ‘We’ll get it checked out.’”

What followed was a series of hospital visits. The de Graaf family visited Stanford and later sought answers at Shriners Hospital for Children in Sacramento, where they were told of a similar case of a patient born without both elbows.

To the best of their knowledge, de Graaf was truly a unique case.

Her parents were faced with a quality-of-life decision for their toddler: Do they have her arm broken and reset at an angle to help with function? Or let her learn to live with the condition?

Sitting amongst children with grave illnesses and serious disabilities, the de Graafs took heed of the juxtaposition in that hospital room. Their daughter was healthy and happy, crawling about the room minus only an elbow, while there were some who fought greater battles.

“It was an adjustment for us” as parents, Steve said. “It went from ‘What are we going to do? My kid is missing an elbow and something is wrong’ to ‘Hey, let’s go on with it.’ We thought it might become an issue in high school or middle school, and we prepared her or that, but because of her personality it was never an issue.”

De Graaf is a curious talent. She possesses the ability to be a magnetic superstar, but prefers the anonymity of the crowd. If given the choice between the spotlight or the shadow, her father says she’d pick the latter.

However, because of her prowess on the diamond, she's often cast as the lead.

"To be a blessing to others and a light for others, and to have them understand that even though you may have a disability that doesn't define who you are," she said. "You are your own person and you can make yourself who you want to be."

Ripon Christian is one of three teams in the region looking to three-peat this spring, joining Sierra and Escalon. The Knights have rocketed to a 4-0 start with wins over Chavez and Tokay, overcoming early adversity to the left side of the diamond. Third baseman Nicole Chapman (shoulder) and shortstop Rylie Nunes (ACL) have suffered season-ending injuries.

She is 3-0 with a 3.50 ERA and 25 strikeouts in 18 innings. She is hitting better than .500 with eight hits and four RBI in four games. In a 3-0 victory over Chavez, a larger school, de Graaf was 3 for 4 and struck out a career-high 11 batters while twirling a one-hit shutout.

“This girl is on fire right now. Pounding strike zone and hitting spots. She’s great with the bat, too. That arm doesn’t affect her,” Rizzuto said. “She has good range, gets the arm down and fields the ball no problem. With her years of training, it’s all become second nature to her. I’ve never asked her a question. Not one. It’s noticeable, but I’ve never seen it affect her on the field.”

De Graaf can do all things on the diamond, except for one: She has yet to master the ponytail. Her right arm simply cannot reach.

“She laughs about it,” Steve de Graaf said. “She knows God gave her a unique opportunity and something to work with, and so she has. She owns it. She knows there are things she can’t do and she works harder at them.

“I’ve always been proud of her,” he added. “God has given her the heart and mentality to play and have fun; do what you can and work hard at it. She’s always embraced it. She accepts who she is and I love that as a father.”