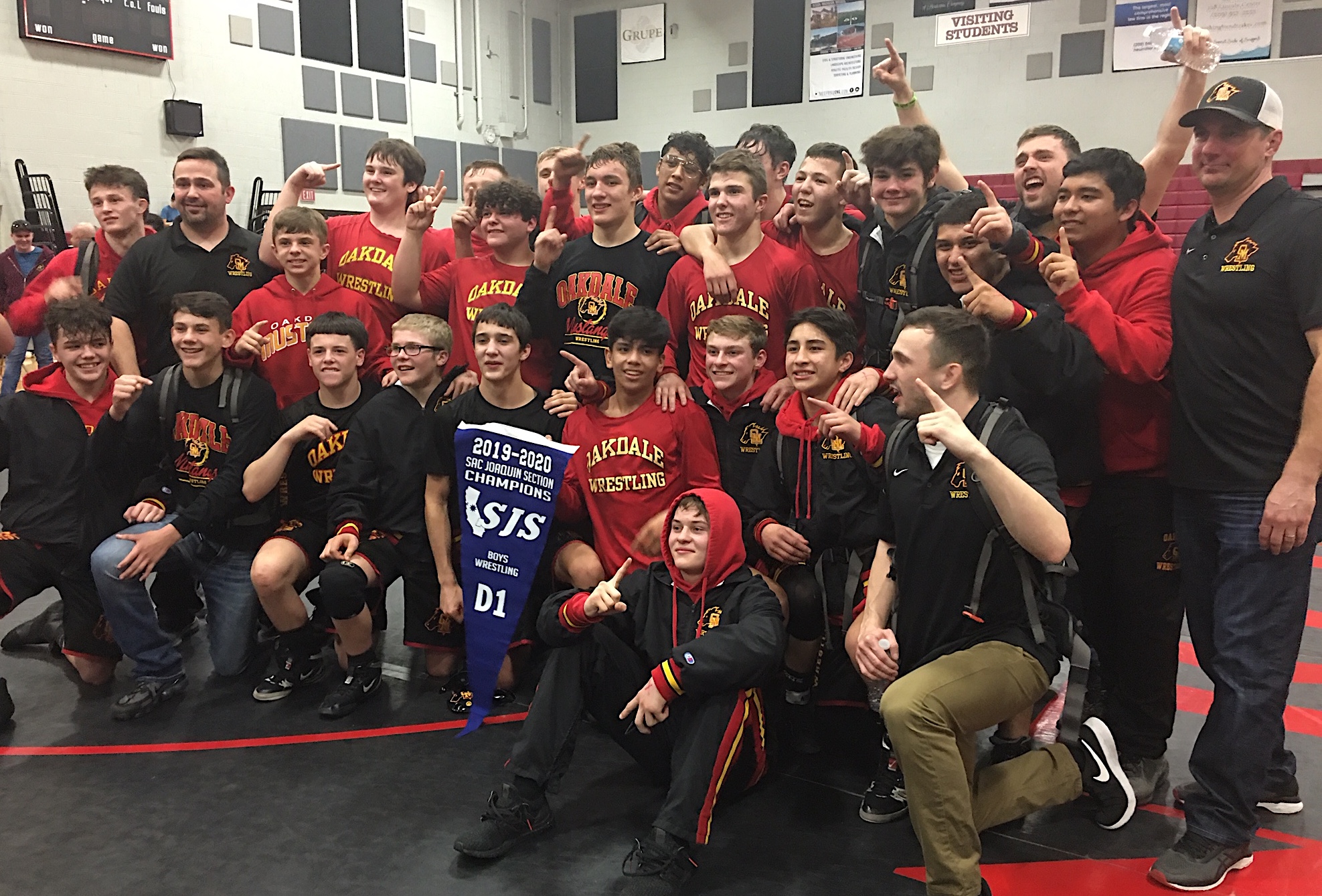 STOCKTON – The Oakdale High wrestlers jumped up and down on the mat like kids at recess, all for something they accomplish every year.

Only this time, they knew it was different.

The Mustangs pointed to the bleachers, repeating “Oakdale! Oakdale!” and their parents joined in the chant. They all understood this title, marking the 12th straight year they took home a blue banner from the Sac-Joaquin Section Team Dual Championships, was special.

Oakdale punctuated its first year in Division 1 with an exclamation point – a ringing 45-17 victory over resident D-1 power Vacaville on Saturday. Often stoic after lopsided victories at this venue over the years, they didn’t let this opportunity to cheer pass.

“That (Vacaville) is a dragon right there,” Oakdale coach Steve Strange said. “All of our guys wrestled their best, from the bottom to the top. Everything went right.”

Michael Torres, Seth Borba, Brayden Abell, Ben Molina and Ceasar Garza all won via pin as Oakdale seized control from the start. Clayton Bashor (126), one of the team captains, sent a message with a dramatic 10-8 victory – breaking the tie with 22 seconds left – over Eric Almarinez, ranked ninth in the state.

“It feels amazing to go into Division I for the first time. We were all ready for the competition here,” said Torres, ranked third in the state (106). “We performed like beasts.”

The section, reacting to Oakdale’s dominance at this event, finally promoted the Mustangs to the top. Last week, they placed fifth in D-2 – far behind champion Vacaville – at the inaugural State Team Duals, a non-sanctioned meet at Clovis North. Oakdale suffered a frustrating one-point loss to Rancho Bernardo, then beat Del Oro for fifth.

"You learn lessons as a young team. We should have been the team going against Vacaville," Strange said. "On that Saturday at 9 a.m. (at State Duals), we weren't ready to wrestle and Rancho Bernardo beat us by a point. Last Saturday at 4 p.m. (vs. Vacaville), we were ready."

Strange was right. The Mustangs warmed up with a 41-29 win over Del Oro in the semifinal, then used their talent in the lightweights and middleweights to separate from the proud Bulldogs.

“Vacaville has been around for a while. We’ve been on the losing end against them many times, especially at sections,” Strange said. “I’ve got a lot of respect for Vacaville, so that’s a big win for us.”

The area teams shined, as they often do, at the Team Duals. Pitman showed off its power in the heavier weight classes to claim its second title over the last three years, capped by a 35-23 win over Bella Vista.

Juan Mora (220) and heavyweight Emelio Gutierrez won by fall over BV. Those two, plus Izzy Tubera, Sammy Silveria, Jonathon Stout, Isaiah Ontiveros and Kendall La Rosa all were unbeaten for the day.

“We dropped some matches, but we’re pretty deep,” Pitman coach Adam Vasconcellos said. “Now we get ready  for the league championships, and then we get our match against Vacaville at divisionals.”

Calaveras, undaunted by its promotion to D-IV, annexed its title with a 51-19 victory over El Capitan. Both teams worked hard to reach the final. El Capitan stopped Casa Roble 39-28 and Calaveras eliminated Wood 38-25.

In D-V, Hilmar used pins by Noble Santos (108), Mark LaBass (220) and Efrain Duenas (195) to turn back Trans-Valley League rival Escalon 36-27 for the title. The Yellowjackets edged the Cougars by four points during their TVL dual.

Mariposa, remembering its loss to Big Valley Christian in last year’s D-VI final, answered with a hard-fought 37-32 victory. A scorekeeping error resulted in BVC believing it had won after the final match, but a re-check confirmed the Grizzlies’ win.

"We knew we were in the clear," Mariposa coach Jerry Lura said.