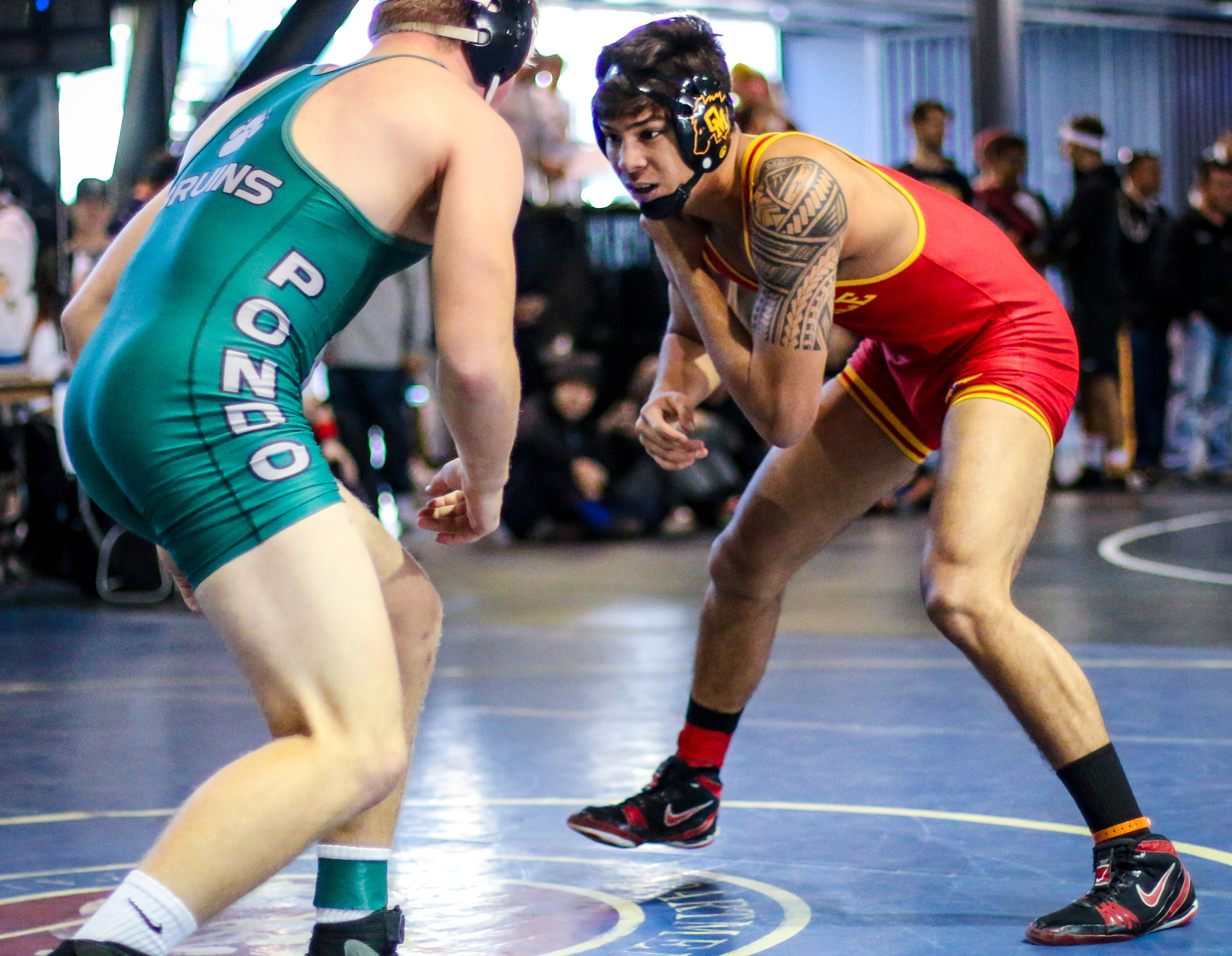 Oakdale High's Gabe Martinez (right) is a three-time CIF State qualifier with a family-first motivation. The ink used in the tattoo on his left arm was sprinkled with the ashes of his deceased brother, Ben Martinez Jr., a 2010 State qualifier. (Ike Dodson)

Like “The Rock,” Martinez’s tattoo is a part of his persona. In those tense moments before the start of a match, Martinez, a state finalist a year ago at 170 pounds, slaps his upper arms, stinging the ink-stained skin.

Quite the contrary, actually.

The ink that stretches across his skin also seeps into his heart. In a sport defined by its physicality, Martinez bares his soul to the world with this shoulder display.

The tattoo memorializes his older brother, Ben Martinez Jr., who was shot and killed on the eve of the 2017 State meet. The 24-year-old sustained a fatal gunshot wound to the neck, flooring a tight-knit wrestling family.

Gabe Martinez took the news especially hard. He grew up watching his brother rise to high school wrestling’s highest heights, mimicking and honing his unorthodox style. In 2010, Ben was a CIF State qualifier at Central Catholic after spending most of the season ranked among the Sac-Joaquin Section’s best at 152 pounds.

Though he didn’t place at State, Ben captured the attention of his younger brother.

“It made me want to push harder than he did. It was amazing watching him wrestle,” the younger Martinez said. “He was goofy, a bit funky, and I thought that was cool. I wanted to be like that. I’m tight with my moves, but at the end of the day, my style is a little goofy, too.”

Martinez learned of his brother’s death shortly after checking into State. In the still of their hotel room, away from the commotion of tournament check-in and teammates, Oakdale volunteer assistant Abel Colunga broke the news to Martinez, catching his star pupil as his life shattered into a million pieces.

“It was horrible,” said Colunga, a member of coach Steve Strange’s staff at Central Catholic and now Oakdale. “I was the first one to tell him. It was a traumatic experience. For him, I couldn’t imagine. It was his hero, his big brother, and all the wrestling stuff they shared. That was one of the worst days of my life — it was horrible.”

In the wake of Ben’s death, Martinez had a decision to make: Would he continue with his breakthrough sophomore season, realizing a dream by stepping onto the mats at Rabobank Arena for the first time? Or would he bow out, taking time to mourn the death of his brother?

Colunga knew what Martinez would do. He would wrestle — and wrestle well.

Martinez won three matches at State, turning heartache into triumph and setting in motion his rise in the 170-pound weight division.

Martinez returned to State last year, storming into the final before losing to Trent Tracy of Frontier, now the top seed at 182 pounds. As a senior, Martinez has been ranked in the state top-10 all season, and punched his ticket to Bakersfield with a second consecutive Sac-Joaquin Section Masters title last weekend at Delta College.

“I asked him, but knew what his answer would be. We were wrestling,” Colunga said. “I had to ask him the question just to be sure, you know, but I already knew what his decision would be. He’s a wrestler. We’re different than most. No matter what happens — good, bad or indifferent — we’re going to step on that line.

Martinez credits his “uncle” for being there for him as a friend, not just a coach. He’s known Colunga since he began bouncing around the wrestling room at 6.

“Without him it would have been really, really sad. I might have dropped out of State that year,” said Martinez, who will be joined at State this year by younger sister Faalia Martinez, a combatant in the girls' 137-pound division. “It was tough. He told me I had a choice. I said I had to do it for Ben. … That’s what you have to fight for — your family, right?”

The tattoo keeps him centered on the tenets of his existence — family, faith and wrestling. When he smacks his arms before matches, Martinez isn’t just channeling his older brother. He’s activating Ben.

The ink used in his tattoo was sprinkled with Ben’s ashes.

“He loves his family so much. It’s funny. People think he’s wild, because he’s intense when he wrestles. He’ll go as hard as he can,” Colunga said. “But he’s got the sweetest heart, more than any kid I’ve ever known. He’s a great kid, but people don’t see that because he hides it through this tough-guy persona, new muscles and a tattoo.”